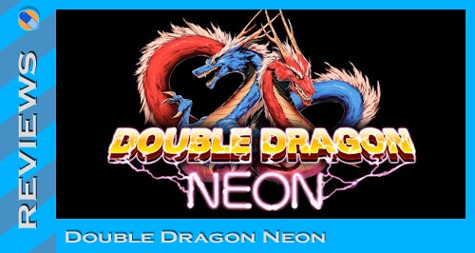 There are two ways to do a retro revival. The first is a literal return to form. Capcom’s Inticreates development house holds the crown on this one. Megaman 9 and Megaman 10 were love letters written to those of us that grew up on the old 8 bit games and just wanted another taste. That approach doesn’t work for every game, though. The source material needs to have already been close to perfection to justify that trip back to the well. Double Dragon is a case of rose tinted glasses given out to the masses. We all of us fondly remember it but there’s not a lot of us going back and playing the game.

That brings us to the second approach: Making the game your own. For this I have to tip my hat to WayForward. Whatever your opinion of Billy, Jimmy, and Bimmy’s newest adventure, it cannot be denied that WayForward has put their own mark on the franchise. 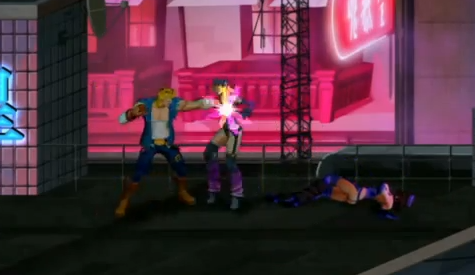 The story of Double Dragon Neon is simple. Thugs have punched Marian in the stomach (again) and kidnapped her (again). You are on a quest to get her back and that quest involves punching the crap out of everyone you meet. Okay, so that’s also the plot of most of the Double Dragon games. But one of the great things about this game is that WayForward obviously felt no compunction to keep it simple. Without giving any spoilers out, I can safely say that no beat ’em up you have ever played has a plot even half as wacky as this game does.

If you are at all familiar with games like Final Fight or Sega’s Streets of Rage series, you’re going to be able to figure out the basics to Double Dragon Neon effortlessly. Though this game does represent great growth in the Beat ’em up genre, the gameplay is not where that growth occurs. Staying true to the roots of the franchise, Double Dragon Neon is an exercise in walking from the left to the right, punching enemies to the left or right, and kicking the crap out of everything to the left or right of you on the screen. Sometimes you’ll climb ladders. 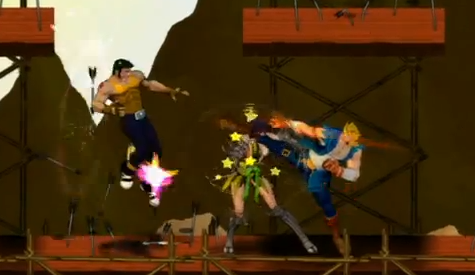 What keeps the gameplay from getting redundant is the way the game lets you level up your character based on how you like to play. Enjoy using weapons? You can choose a “tape” that boosts your weapon skills. Are you amazing at dodging attacks? There’s a tape that rewards consecutive hits without being injured. These “tapes” are really just pieces of equipment or stats that you level but in Double Dragon Neon they take the form of actual cassette tapes, complete with a song for each tape that you can listen to when you are selecting the play style you prefer. The more tapes you receive for a stat type, the stronger that modifier gets.

There are also tapes for special moves like the fireball or the classic whirlwind kick and they work the same way. Double Dragon Neon deserves a huge nod for encouraging players to find what works for them. The beat ’em up genre is not exactly known for granting the player so many options when it comes to smashing heads. 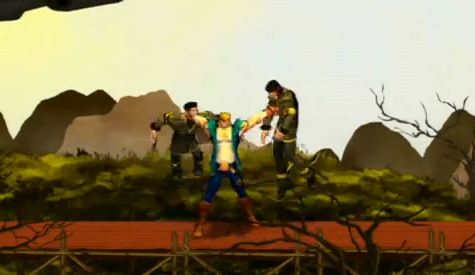 Speaking of music, the sound track is almost as important a part of Double Dragon Neon as the gameplay. The name ‘Neon’ refers to the visual throwback to the 80’s but that’s only half the story. The songs in this game hit this perfect balance between parodying the electronic infused anthems of the 80’s while also sounding like something that could seriously have come from the time of the synthesizer. This is a game you will want to turn the volume up for and you’re going to be smiling the whole time. As a bonus, the guy behind the game’s soundtrack has made the Double Dragon Neon tunes available for download for the incredibly reasonable price of whatever you want to pay.

The last thing I want to talk about is the visuals. Double Dragon Neon’s graphics are simple but very effective. They really draw upon the level design and aesthetics of the original games and it’s all wrapped up in an 80’s splash of glossy neon. The character designs are simple but very effective; Each model has a surprising amount of detail but the screen never seems busy or cluttered. The tone and humor of the game is conveyed just as much through the game’s appearance as it is by music and plot alone. 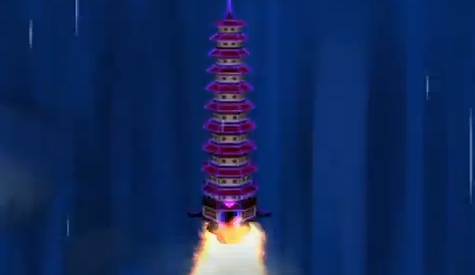 There are two things that I am not too keen about in Double Dragon Neon. The game is a bit on the short side. A dedicated player will beat the default difficulty in an afternoon. Also, one of the features that I am the most excited about, online multiplayer, was not working when I was preparing this review. Word on the street is that this will be tended to in a future update. Hopefully there will be even more support for the game further down the line. More playable characters or even a few extra levels would be a great addition.

Double Dragon Neon is a game that I honestly think everyone can get into. It’s a great throw back for the retro heads out there, a fun brawler with some actual depth for serious gamers, and it’s got a wacky plot that will make pretty much anyone laugh. Double Dragon Neon is an example of another way to do a retro revival where you avoid leaning on the source material as much as possible and make the game your own. For the $9.99 USD asking price, I think this game deserves an afternoon with you this weekend. 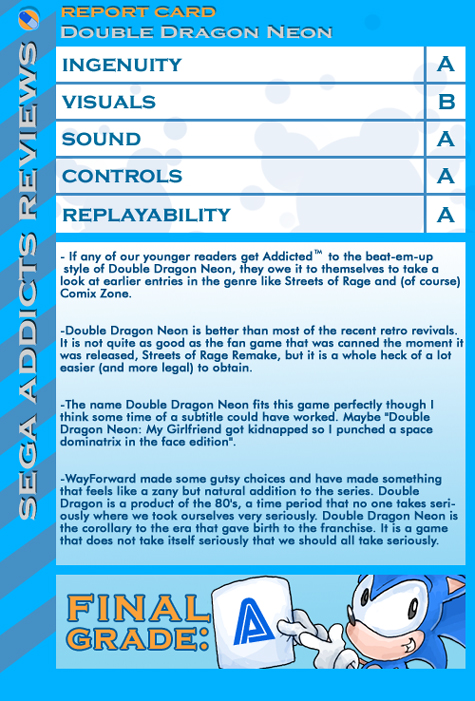