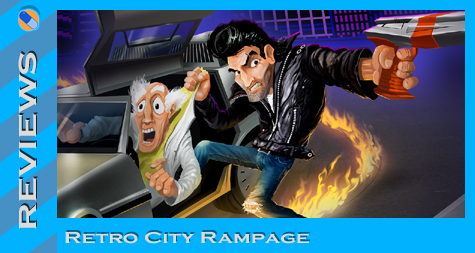 While retro references and pixel graphics plague the modern games industry I think it’s safe to say that we haven’t seen a full blown parody yet. Most retro styled games often leave the inspirations to the graphics and nothing else. Enter Retro City Rampage, a game which not only aims to take the art style of the games we once loved, but the characters, music, and mash them up with satire into what could be the ultimate tribute to the games that we as retro and Sega fans hold close to our heart.

But aesthetics are cheap if the game itself isn’t fun. And we’ve been reporting on it for a while but now the time has come. Is Retro City Rampage really worth the attention from Sega fans? Hit the jump to find out!

Retro City Rampage from beginning to end is ultimately a story about references. The game is set up in a way where it can deliver mission after mission of retro based humor. It does this by employing several macguffins which you’ll be sent to find one after the other at the games start. The story itself is deliberately base to give way to the jokes which come very fast from all directions. The humor however can be hit or miss but overall I found myself laughing consistently. While there are some puerile gags that didn’t suit my taste, they were immediately offset but another hit gag that genuinely made me laugh. However while I did find myself laughing at most cut scenes, there were some awkward moments where the game would take a break to divulge into rants against big business which didn’t really fit into the tone of the game, and left me feeling a tad awkward. 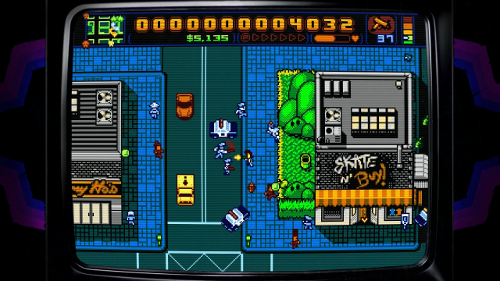 The presentation of this game is easily one of the best things about it. The music for example adds a great deal to the atmosphere and could be one of my favorite collections of chiptunes that I’ve heard in a while. Along with these retro based tunes is a classic retro style with a lot of options in terms of color schemes. If you aren’t a fan of the default mode you can change the settings and view the game through the eye of many different videogame formats including a Sega based ‘blurst processing’ scheme. This was neat but I always found my times with these modes to be temporary as the main graphics look superior to all the other options in pretty much every way. I found that to be the case with all the options in the game including the control system which you are welcome to change but never really have a reason to.

The control system itself works fine but I did notice some awkward trouble with the game when it came to speed. Sometimes my character would feel way too slow, but when the game tried to give me a sense of speed I felt like it went too fast and I didn’t have any real control over how fast I moved in the world. 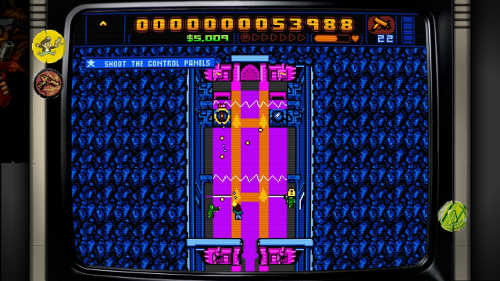 A great surprise to me was that Retro City Rampage is at heart a real open world game. The city itself has many nooks and crannies, and there are jokes scattered throughout the game via the store names and various billboards. These rarely repeating signs and creatively animated citizens give the world a sense of life outside your adventure which I really appreciate. There’s also a lot to do outside of the main story missions including arcade challenges and second rate sprees. Needless to say if you’re a fan of time based rampaging mini-challenges you’ll get a kick out of the various extras the game has to offer. Unfortunately if you’re not a fan of this there’s little to do once the game is completed. How much time you spend is really up to you, but if you’re in it for the main story missions you may find yourself a tad disappointed when the game comes to an end, as there’s not much to do other than explore.

Ironically the main problems with the game lie in the modern aspects of game design and not the retro inspirations. Like the pacing in Grand Theft Auto, Retro City Rampage spends an awful lot of its time explaining the world and what you can do, rather then letting you explore to find these things yourself. It’s this and a handful of really frustrating missions that stop Retro City Rampage from becoming really great. For example there are a couple of annoying parts such as a dynamite throwing section, where you aren’t given enough wiggle room to complete your objective in the given time. The final boss also left a bad taste in my mouth as it didn’t seem to have anything to do with the rest of the game’s play style. The game had done such a great time of mixing genres earlier before that this really jumped out at me and colored the otherwise fun experience I was having. 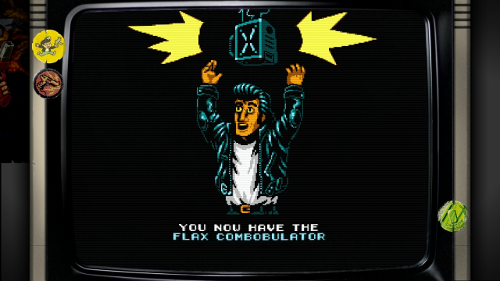 When Retro City Rampage is good it’s fantastic. However, a handful of really shoddy missions do tend to spoil the fun at times. Although in the end I feel that the game’s various faults can get irritating at times, the good outweighs the bad and I was still left with a fun and charming experience. For the Sega fan and the child at heart there’s a lot to enjoy in this funny, if rough-around-the-edges, take on retro games. 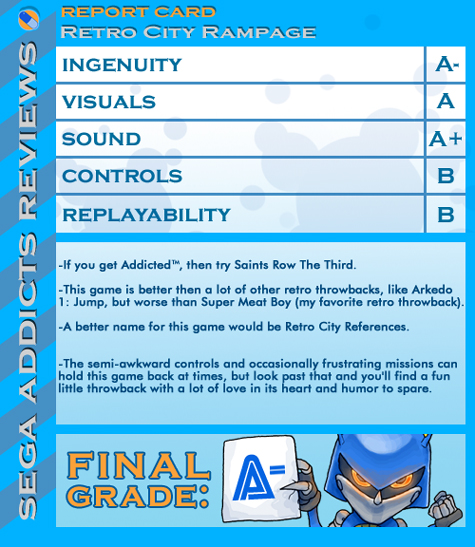 Sega Genesis Classics coming to a PC near you