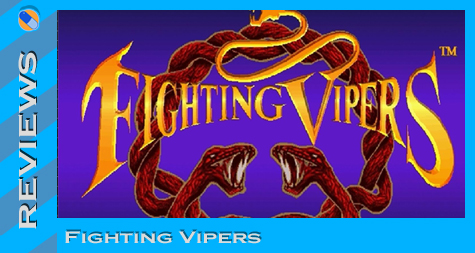 I am betting that most gamers do not know what to make of Fighting Vipers. The younger gamers have probably never heard of it. They’ll take a look at it and dismiss it (ironically) as a Tekken or Soul Calibur rip-off. Older gamers will regard this as another Sega money-grab, a re-release of a game they have beaten to death over and over again. Everyone else might sigh and wonder when Sega will stop raiding their old IPs.

If you fit into these categories, there is a good chance you are cheating yourself out of a great experience. The release of Fighting Vipers as part of Sega’s AM2 collection on XBLA and PSN should be regarded as the return to grace for an unfairly forgotten series. 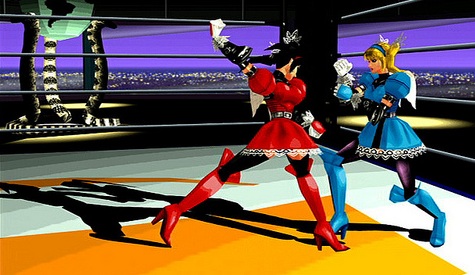 When Sega’s AM2 Development Group created Virtua Fighter back in the early 90’s, there was not really a format to follow for 3D polygonal fighters. Soul Calibur, Tekken, and the like had not yet been dreamed up.

Virtua Fighter hit the arcades in 1993 and set the rules for almost all 3D polygonal fighters that followed. As valuable Sega’s infamous “arrow above car” patent is, imagine if they had been able to establish ownership over the “punch, kick, guard” control scheme!

That simple scheme was so universally liked that AM2 pretty much copied and pasted that bit of code into Fighting Vipers. The result was a game that played and felt very much like Virtua Fighter 2 (also available on XLBA and PSN). What sets Fighting Vipers apart from Virtua Fighter is an armor gimmick. Each character wears a set of armor. Some of the characters have cyber suits. Others have protective pads. One character has an armored lolita thing going on. As you abuse your opponent with punches, kicks, combos and a healthy dose of slamming them into walls, you will slowly wear down their armor. Hit them in the same place enough times, and that portion of their outfit will explode. Characters missing parts of their armor are now vulnerable to damage there. This system does two things for Fighting Vipers: It infuses a risk and reward system into the game play and it makes the game more visually interesting as characters change their appearance based on how their armor has fared. 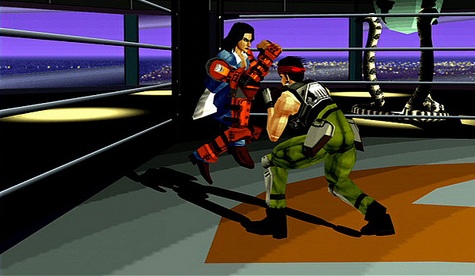 Fighting Vipers is not exactly a house hold name but there was a time when it was one of Sega’s biggest properties. After a stint in the arcades, Sega ported a version of the game over to the Sega Saturn. This is the game that most people will remember. It was pretty good. A little bare bones (most games were back then) but a very solid port. If you enjoyed that game at all and think that you have no reason to download this re-release, trust me when I say that enough was lost in that conversion to warrant giving this game a look. 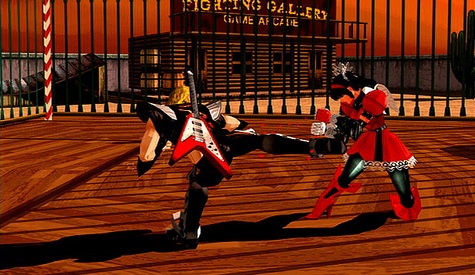 Sega did not put a whole lot of work into gussying up this title. If you are expecting custom made menus, a variety of visual schemes, or any new content you’ll be disappointed. Please, don’t take this as a criticism, though. It would be nice if this title had received a similar treatment that some of Sega’s Master System and Genesis re-releases have been given, but I think that Sega focused more on keeping their development costs low. So when you evaluate this title, make sure to keep in mind the $5 price tag.

The one truly notable addition is the online component. When I was playing, I did have some trouble finding opponents but it usually only took two or three tries to find someone to play against. When I did find a rival, the gameplay was silky smooth. There was no lag. My opponents defeated me handily (over and over again) with no interference from poor net code or dropped connections.

Fighting Vipers is a high quality / budget priced realization of one of Sega’s finest fighting games. It is a throw back to one of the brightest parts of Sega’s history. While this game might be a hard sell to gamers who either expect something more epic or were old enough to have owned a Saturn, I think Sega has made a really smart move in the pricing department. If an arcade classic with tight controls that won’t break the bank appeals to you, plunk down your $5 for this truly solid title. With luck, this might be revival of something special and uniquely Sega. 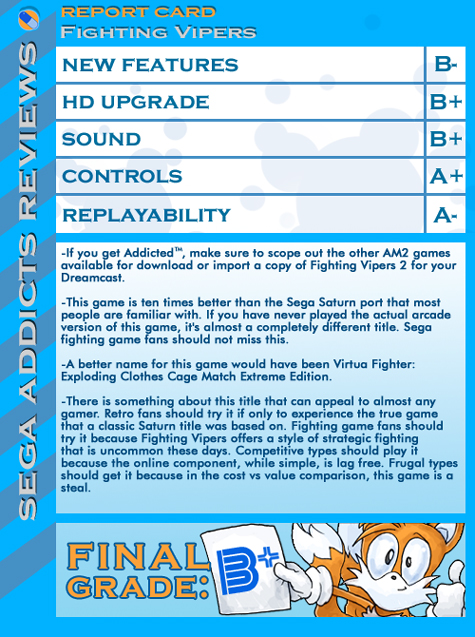 Aliens vs. Predator is possibly coming to PSN