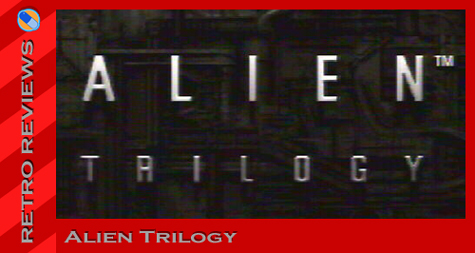 With the arrival of Aliens: Colonial Marines on most consoles this week, what better way is there to prepare for the bug hunt than with the 1996, “classic,” Alien Trilogy on the Sega Saturn? Some may remember this game for its creepy atmosphere, eerie soundtrack, and frightening enemies: all traits that Gearbox is touting for its latest Xenomorph party. Alien Trilogy released in the prime of the Sega Saturn and PlayStation war, when movie tie-ins were confused but sometimes confusingly awesome (see: Die Hard Trilogy). But is this game as unnerving today as it was nearly 17 years ago? Grab your motion tracker and hope for the best. We’re goin’ in… 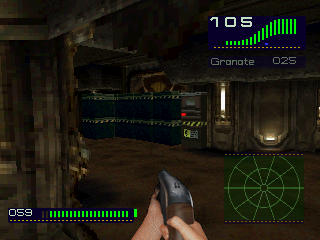 This is my boomstick

*Reviewer’s Note: the screenshots are in German, because I could not find any high-quality English screenshots*

Before even reaching the main menu, you are treated to a CG cut scene featuring the famed Aliens dropship entering the atmosphere of LV-426. So, already we are contradicting the title of this game as we have skipped the first Alien movie. Oh well, how could you make a FPS out of that movie anyway? The narrative following the dropship informs you that you are on a mission to wipe out the Xenomorph threat and bring back some samples. Sounds easy enough, right? As easy as pulling a tooth from a shark, I would say. A shark that bleeds ACID.

Aside from the CG cutscenes, the game tells its story and distributes your missions on the loading screen prior to each level through text. Once loaded, you enter the dark corridors of LV-426’s terraformed colony, which takes up a third of the game. The other two sections of Alien Trilogy take place in the prison from Alien 3, followed by the bone ship discovered in the first Alien movie. So, for the sake of intensity, I suppose, the game jumps around the trilogy. I mean, you never start out a game in Shredder’s Technodrome, even though that’s where the heart of the problem is, right? 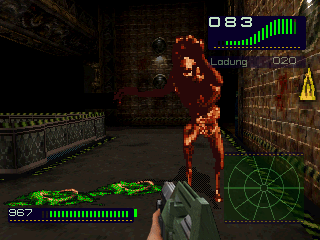 You gonna clean that up?

Say what you will about the somewhat dated graphics of this game; the music and sound effects keep it together. The mostly subtle soundtrack is composed of very light beeps and bloops, or sometimes-distant techno and trance beats. This distant soundtrack causes you to listen to every little sound in the game. After you hear that first scuttle of a disgusting facehugger, your ears will be perked before you find anything more powerful than your handgun. Even after you find more powerful weapons, you will still cautiously turn each corner and open each door. Alien Trilogy definitely does a good job of staying dark and eerie.

This game oozes atmosphere, and ironically enough, the pop-up in the game adds to the distant shadows somehow appropriately. Walking down the dark corridors is done slowly and even sometimes more carefully after killing facehuggers and Xenomorphs as their dead, acid-covered bodies will harm you if stepped upon. The enemy sprites are nothing special, but they don’t have to look frightening to scare you enough to gradually step back while pummeling them with bullets. 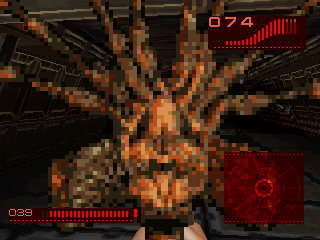 He just wants a kiss

Pleasantries out of the way, this game has not aged well as a whole. The missions are horribly repetitive. For the most part, you have to kill every enemy in the level, while sometimes collecting ID tags from fallen soldiers and scientists, or a certain amount of switches for the sake of progression through doors, lifts, or harmful steam pipes.

This would not be very difficult if your map did more than tell you where switches and doors were, but it doesn’t.  You can find an “auto mapper,” which displays the entire layout of the level, but this can actually hinder your mission from time to time. Some missions will require you to search an entire level for a certain switch, which is easier to do as the map is exposed gradually, since the corridors look the same after you walk ten feet.

Each level’s completion percentage in the game is determined by three things: enemies killed, secrets found, and mission completion. However, you have no way of knowing if you have killed all the enemies while playing, or how many secrets are left unfound, so you have to play blindly in some levels and hope for the best. 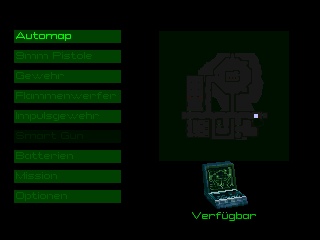 I know it’s not in English, but this will hopefully illustrate just how useless the dimly-lit map is

The game also jumps up in difficulty after you defeat the first Alien Queen, not in the strength of enemies, but in their numbers. Immediately after opening the first door of the second setting, you are greeted with two Xenomorphs and could die immediately if you are not prepared, resulting in more trial and error. This happens multiple times, and there are even some levels that hold a Xenomorph directly behind the exiting door. That’s just plain unfair.

In the later levels of the game, you are fighting humans in the halls of the famous boneship, which never gets explained since you watch a cutscene of Ripley walking into the desolate ship by herself. Even in the mission briefings before each level, they only mention Xenomophs as a problem and never bother telling you that any scientists or survivors are walking the ships skeletal body. There are also tons of “dog-aliens” walking around from Alien 3, of which there was only one – hence a minor thing called “plot,” in the third movie. This is more fan rage than anything, but once you defeat the first Alien Queen in the game, you realize this game is more of a sidestep fanfiction than an actual game about the big 3 Alien movies. If you take it for that, and enjoy corridor shooters like Doom or Wolfenstein, then you may get some longevity out of this game and perhaps even see the end. 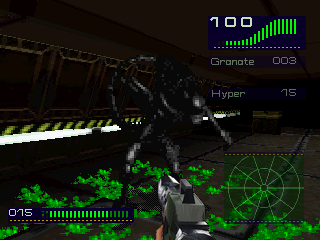 Hope you brought your boots

Alien Trilogy also artificially creates longevity by forcing the player to hunt for batteries to operate certain door switches, then to search an entire level for said door. This isn’t creative; it’s tedious, and will force some to use a level-skip code after growing tired of running around aimlessly. Due to its repetitive level layout, it would be much more difficult to measure progression if not for the dead enemy bodies on the floor serving as bread crumbs. Some may wonder if this was the reason the bodies don’t disappear.

Alien Trilogy was scary to me as an 11-year-old, and can sometimes be an enjoyable brainless romp through dark hallways today, but it is not as wonderful as I remember it to be. I could see this game being entertaining if you were to sit down with a friend and heckle the graphics while playing through with some cheat codes to decimate anything standing in your way, but nothing very stellar. Any Xeno-fan will appreciate this game after getting past its inaccuracies, and may even be reminded of the recently-released Prometheus movie with later levels of the game. If you are looking for a shooter with variety and non-stop action, however, you may want to look elsewhere. 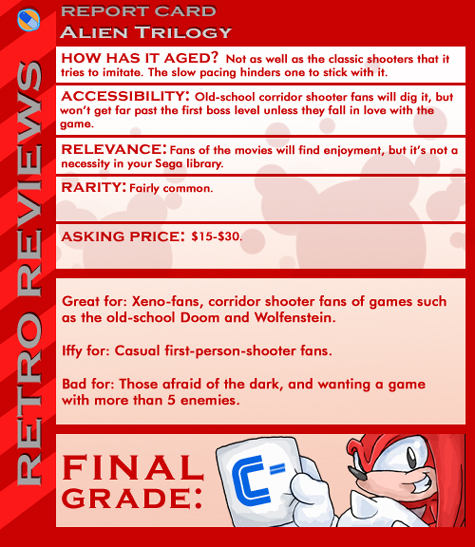 Rumor: Shining the Holy Ark sequel in the works