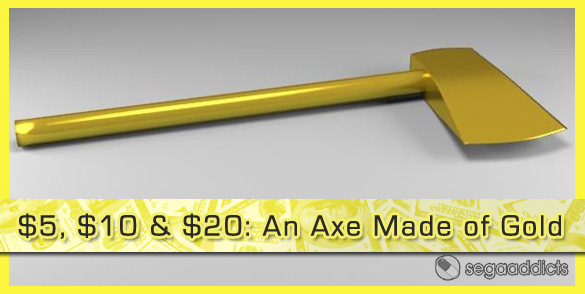 This month, I’ll be highlighting some games that that are part of a well-known Sega franchise, but exist outside of the main series. That series is the arcade beat ‘em up we all know and love, D. D. Crew! And by D. D. Crew, I actually mean Golden Axe!

So hit the jump to read about an attempt to modernize the franchise, an ambitious portable spinoff and what happens when you turn a beat ‘em up into a one-on-one fighter! 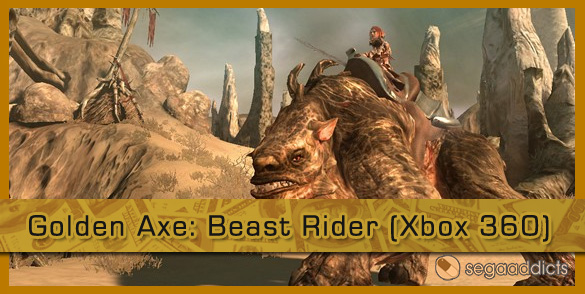 One thing I really love about the modern game industry is its constant desire to take classic franchises and rebrand them for a new generation of gamers. Think about it, if publishers didn’t do this we would have never received such works of art as Bomberman: Act Zero, Shadow the Hedgehog, whatever that Final Fight reboot was on PS2 and, of course, Golden Axe: Beast Rider.

Did you ever feel like Golden Axe should focus more on titillating its players by removing the male playable characters and just allowing you to play as the female, Tyris, with little-to-no clothes or armor? How about that annoying co-op mode from the original games, wouldn’t it be better if a friend or lover had no choice but to watch you play the game alone? And why does everything in the original games work like it’s supposed to? Can’t there be some occasional clipping, sketchy collision detection and invisible walls?

Well, guess what? Sega heard your prayers and knew that for 2008 to be a success, they finally needed to release what the Golden Axe fans were demanding. Plus, they put their best developer, Secret Level (of Iron Man 1 & 2 fame) on the case to create a Golden Axe like no Golden Axe before. That game, was Golden Axe: Beast Rider for the Xbox 360 and PS3.

Should you buy it?: Maybe. I may have been a little overly sarcastic in the paragraphs above, as Golden Axe: Beast Rider is not entirely unplayable. Yes, they removed the main thing that made Golden Axe great by taking out co-op play and giving this to a developer who is known for unpolished movie tie-ins, but this is a competent action game deep down. For the price, you get over 10 hours of hitting things with swords in a setting that’s straight out of some clichéd medieval pulp novel. So, as long as you can deal with the game’s repetitive nature and technical hiccups, you could do much worse with a $5 bill. 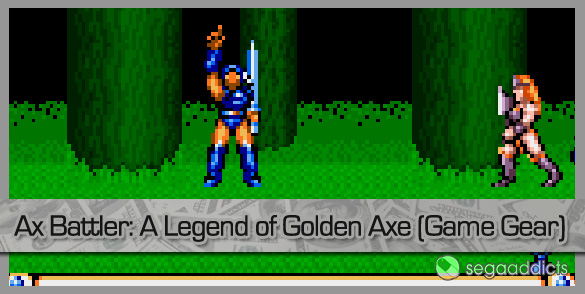 Ax Battler was one of Sega’s first attempts to take the Golden Axe franchise outside of its arcade beat ‘em up roots and it’s definitely an ambitious project for a Game Gear game. Taking inspiration from Nintendo’s non-traditional sequel to Zelda on the NES, Ax Battle is a collage of genres with elements from RPGs, fighting games and platformers.

The story has you, AKA Ax Battler, tracking down the infamous Death Adder, who has recently stolen the almighty Golden Axe (hey, that sounds familiar!), in an attempt to stop him from Golden Axe-ing the world. To do this, you’ll explore the world and towns through a traditional overheard view, similar to what was seen in many 8-bit RPGs of the time. However, it’s the battle and dungeons that differ from the typical JRPG. Random battles take the form of a standard one-on-one fighter and dungeons are expanded into longer levels with a mix of platforming of action.

All these elements boil down to a game that is quite ambitious for Sega’s 8-bit handheld. In fact, it may have been a little too ambitious as the random battles start to get repetitive early on with the fairly basic fighting mechanics. As a full turn-based RPG, this game might have really shined as the developers wouldn’t have had to develop so many gameplay elements at once. In the end, you’re left with a game that is a unique mix but fails to make any of it that compelling.

Should you buy it?: Yes. It’s far from a great game, but as a decent spin-off to Golden Axe and a pretty good exclusive for the system, it’s a worthy investment. Fans of Zelda 2 or the Golden Axe franchise in general will find something to enjoy, while others may play it a couple times just to see what they missed. There is the added bonus that if you end up liking the game, it takes quite a few hours of gameplay to finally take that Golden Axe away from Death Adder. 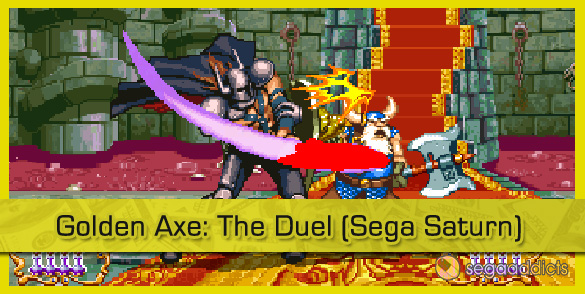 Golden Axe: The Duel was Golden Axe’s big debut on the Sega Saturn and it’s not surprise that Sega took the series into the huge 2D fighting genre after the success of Street Fighter 2. Usually, I would scoff at a publishers attempt to cash-in on a craze, but Golden Axe: The Duel has a good thing going for it. For one, the medieval setting made it stand out from the usual 2D fighters on the market at the time and the developer behind the game, AM1, definitely knew what they were doing as the game looks and plays quite well.

The story makes complete fighting game sense as Death Adder has once again claimed the almighty Golden Axe and is now hosting a fighting tournament in case anyone wants to kill him before he smashes the world. So, a new group of heroes (although some of them are descendants of the original Golden Axe characters), decide this is a good tournament to participate in and stop Death Adder.

Visually the game makes great use of the Saturn’s 2D-based processor with detailed and fluid sprites and a neat gimmick where the background and viewpoint zoom in and out. The fighting itself isn’t anything out-of-the-ordinary, but it’s competent. Plus, they did a great job of incorporating some Golden Axe tropes like the little gnomes who give power-ups.

Should you buy it?: Maybe. The American version of this game has a pretty high price tag so I can only justify the cost if you are a Golden Axe or 2D fighting game superfan. It is an above average and unique fighter at a time when the market was full of the genre, but it doesn’t do anything extraordinary. However, if you really want to try the game and spend less money, you can find the Japanese release for much cheaper. Being a fighter, I’d imagine the game is quite playable without any knowledge of the Japanese language.

Buy your significant other a silver Sega Saturn ring