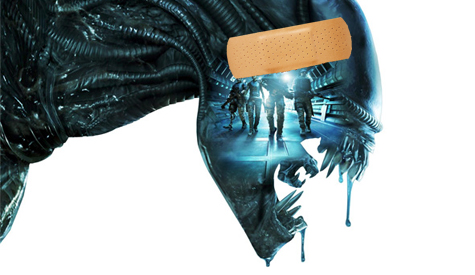 Sega and Gearbox have released the first patch since Aliens: Colonial Marines’ initial release for PC, PS3 and Xbox 360. The patch fixes quite a few bugs including preventing players from walking and falling outside of maps, preventing Ripley’s flamethrower from continuously firing without player input and helping NPCs find their way to the next objective without getting lost or stuck.

Unfortunately, this patch is probably too little too late as most people have likely given up or passed on the game. Plus, it still doesn’t fix major problems like players not having their progress saved or just making the game actually good.

Anyone still playing Aliens: Colonial Marines or planning to pick the game up sometime? Hit the jump to read the full patch list.

General
Addressed an issue that could sometimes cause co-op player revival to not work under certain circumstances.
Addressed issues with players not spawning into a level properly.
Fixed a marine player invincibility exploit.
Resolved several instances where players could walk or fall outside of maps.
Fixed an issue that could cause localized text to sometimes display incorrectly.
Addressed an issue where weapon ammunition was not always highlighted properly.
Addressed some issues where multiplayer / co-op clients could see interactive objects displayed in a different state.
Fixed a bug affecting voiceovers with the Firing Range bonus content.
Addressed an issue where Ripley’s Flamethrower (bonus content) would sometimes fire continuously without player input.
Addressed a rare issue that could cause Achievements to not unlock properly.
General user interface improvements.
Miscellaneous bug fixes.
Campaign
Addressed some issues that could cause improper warping for co-op players.
Various tweaks to address instances where NPC characters would not always properly navigate to objectives.
Added safeguards to prevent players from using a weapon in the weapons-suppressed portion of “One Bullet.”
Modified Bella and Reid’s behavior in “No Hope in Hadley’s” to prevent them from spawning at the wrong point.
Versus
Fixed issues that could clients to report inaccurate results and statistics.
Addressed instances where a map would appear to “pop in” when loading into a new match.
Addressed an issue that was could cause stutter when opening the multiplayer scoreboard.
Switching profiles while in a lobby now returns players to the title screen immediately.
Multiplayer teams should now correctly auto-balance between rounds.
New Xeno appearance customization added.