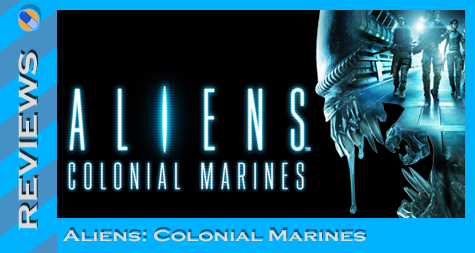 Also available on PS3 and PC

Please note that the following review is for the pre-patch version of Aliens: Colonial Marines. Since those who are still not online will be saddled with the version they originally purchased no matter what, I feel it’s important to be honest about the game that was initially shipped. For a brief addendum discussing my feelings on the post-patch experience, check out the end of the review.

Since its premature reveal, the legacy of Aliens: Colonial Marines has been one of boastful promises. Finally, we were going to have an Aliens shooter that truly lived up to the atmosphere and nerve-jangling tension of its well-loved source material. Finally, we were going to see Sega back on the top, wielding a formidable shooter with a real potential for longevity. Finally, we’d get our hands on a nearly forgotten title that’s been fading in and out of existence for years. Finally, the plot of Aliens 3 would be justified.

Perhaps that’s why the final product hurts so badly. 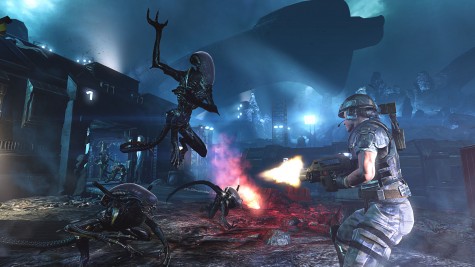 It doesn’t take long for the seams on Aliens: Colonial Marines’ threadbare xenomorph costume to show. In fact those seams don’t just show, they rip all the way open to reveal a tangled ball of unfinished mechanics, lazy plotting, and grotesque cosmetic blemishes underneath—all laid bare in a matter of minutes. From the very first stage in the campaign, even before the myriad graphical glitches bored their way into my unwanting eyes, Aliens: Colonial Marines greeted me with an intangible, hollow blandness from almost every department.

A lot of this spiritless, uncharismatic feel can be blamed on the complete lack of narrative set-up. After a couple brief, aesthetically and materially vapid debriefing cutscenes–during which you are introduced to a handful of characters you will never interact with again–Colonial Marines sends you on your merry way, failing to offer any reason as to why you should give a damn about anyone or anything coming later on down the line. Solid plotting and character development certainly aren’t essential, but considering how hard Colonial Marines tries to force several dramatic moments in the latter half of the campaign, the developers could have at least tried to earn some interest for their paper-thin characters. Cliched grizzled commanders and repetitive “ooh-rah to ashes” one liners just don’t cut it. 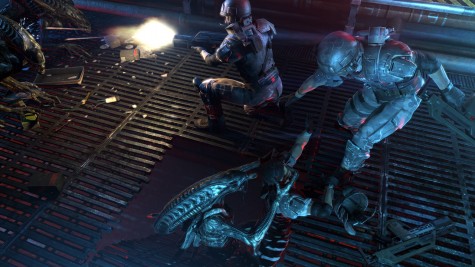 This isn’t to say there aren’t big inciting events in the game’s opening, because there certainly are. Within the first few minutes of the game you’ll see your first chest burster, come across a whole crew of mutilated corpses, and nearly be sucked out into space. The problem is the game rushes by these and many more events without any real flair, presenting them in terrible in-game animations and dialogue. Even worse, the character models acting them out are some of the worst I’ve seen in a very long time, with faces that display literally zero emotion or variation. This makes rare “dramatic” scenes look laughable and wooden, with terrified, dying characters looking stone-faced and disinterested, even at the most pivotal of moments.

After those first inciting scenes of underwhelming action, the real tragedy that is Aliens: Colonial Marines unfurls like a bleak, sadistic comedy of errors. From the moment you fire your first shot, this campaign is a non-stop parade of ubiquitous, frustrating glitches and half-baked concepts that would be almost impressive in their pervasiveness if they weren’t so egregiously infuriating.

Most prevalent in the shoddy online co-op, this game’s glitches are easily its most pathetic and damning trait. Xenomorphs regularly get caught on scenery, get hung by their own tails, wedge themselves into solid walls, freeze in mid-lunge, disappear in the middle of being fired at, run directly at walls, and twitch uncontrollably. Characters flicker in and out of view after they’ve already been killed, float around in mid air, and carry around invisible guns. Every one of these awful bugs is further marred by constant—and I mean constant—screen-tearing. These inexcusable visual and mechanical flaws are the first and potentially most defining nails in the Colonial Marines coffin, as they deflate any sense of tension or suspense offered by even the most effective environments and scenarios in the game. 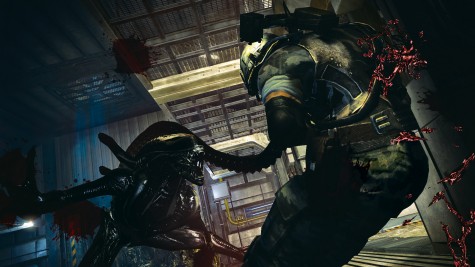 That’s a real shame too, as there is a small handful of genuinely promising moments with real, palpable tension driving them. They are definitely few and far between, but when they do show up it’s a refreshing burst of fresh air that suggests that Colonial Marines may not be completely devoid of ideas. The very best of these moments comes about halfway through the game, when you first encounter a new Xeno type called the Boiler. Like a T-Rex in Jurassic Park, these baddies sense you via movement, and unless you tread carefully, they’ll gallop up to you and explode. While some may find such creatures frustratingly touchy, I found their environment and set-up to be pleasantly eerie. As I said before, the glitches threatened to destroy this tension, but along with a handful of other thrilling set pieces (like one involving a massive thrashing Queen alien behind glass), these scenes offered some minor respite from the game’s constant frustrations.

But even beyond these glitches, the most tension-killing aspect of this game is probably its brain-dead A.I. In Colonial Marines the Xenomorphs don’t hunt you so much as they run at you kamikaze-style. They of course climb walls and surround you from all angles, but since taking them out basically entails loading them full of bullets as they bombard you from across a room, they end up being more irritating than genuinely intimidating or formidable.

Their attacks are also absurdly powerful and unfairly quick, so cheap, behind-the-back surprise attacks that result in quick and unwarranted deaths are a regular occurrence. As the campaign progresses, these kills become more and more frustrating, as the game’s antiquated, unforgiving health/armor layout makes recovering from these absurdly speedy attacks nearly impossible. 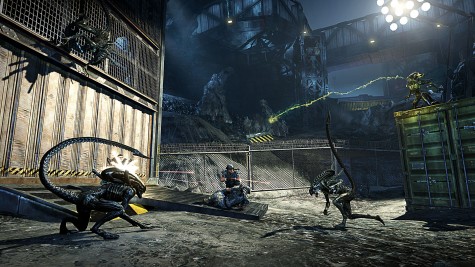 But when human soldiers are added to the mix, this already frustrating experience becomes nigh-unplayable. That’s because the gun-toting Weyland-Yutani soldiers force you to make liberal use of cover, trading the run-and-gun melee combat of xenomorph confrontations for a careful stop-and-pop shootout. Later in the game, these contrasting enemy types are mixed together, ostensibly to create massive, frenetic battles. This just makes both melee and long-range combat strategies simultaneously mandatory and useless, as you can’t take cover from enemy fire because the xenomorphs will storm and kill you from behind your barricade, but you cant step out in the open to keep the waves of bullet-sapping xenos at bay because you’ll be mowed down by a hail of gunfire.

This frustrating gunplay isn’t helped by Colonial Marines’ underwhelming and unrewarding weapons system either. While I like the way your weapon upgrades and experience level apply to your general profile in every mode you play, the weapons are so uninspired, indistinct and underpowered that I often forgot that these upgrades even existed. In fact, most of these weapons were so lacking in distinct characteristics and empowering feedback that I felt almost no impetus to experiment with most of the weapons in my overcrowded arsenal. Even the beloved flamethrower or Power Loader, franchise-defining weapons that any Aliens fan would kill to use, are cumbersome and, well, boring to use. 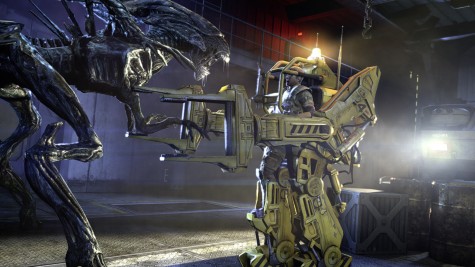 But even if the shoddily constructed campaign lacks several layers of polish, the game could still save quite a bit of face if the online experience could hold up its end of the bargain. To a minor extent, the Versus modes manage to pull it off. While none of these have much to offer that is particularly original or fresh, they pretty much all represent solid, Xeno-flavored versions of well-defined FPS modes. While lacking the strategic possibilities promised by the game’s marketing campaign, human vs. alien battles are still fast-paced and visceral, especially in some of the more sprawling, labyrinthine maps.

Controlling xenomorphs is often a bit of a chore though, as climbing on walls, lunging at enemies and using melee attacks all feel loose and tenuous at best. While I’m a big fan of all the new xeno designs created for this game, the only one I found myself attracted to in multiplayer was the Spitter alien, as its acid-spewing attack is easily the least cumbersome to utilize. Little gameplay tweaks like the ability to briefly take on the body of an explosive Boiler alien help to further spice up the alien side of things, while the actual excitement and tension of navigating shady hallways in search of xenomorph foes makes the human side far more satisfying than anything found in the campaign. 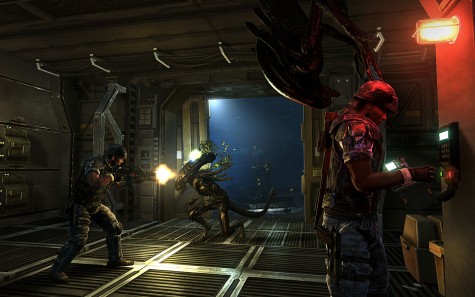 The best online mode is probably the much-touted “Escape” mode, a four-on-four Left 4 Dead-esque mode that challenges a team of marines to move from point to point while different special xeno types try to pick them off before they can make it. While I think this abbreviated version of L4D‘s bread and butter is a bit too simplified and speedy, it’s easily the only aspect of Colonial Marines that comes close to realizing the game’s real promise. While the strategy of dragging a teammate away from his cohorts doesn’t really work, and a lot of the aforementioned loose alien mechanics makes things feel loose and cheap in the same way Aliens Vs. Predator did a few years back, I still find myself wanting to return to this fast-paced mode that rectifies the campaign’s glaringly moronic A.I. problems. 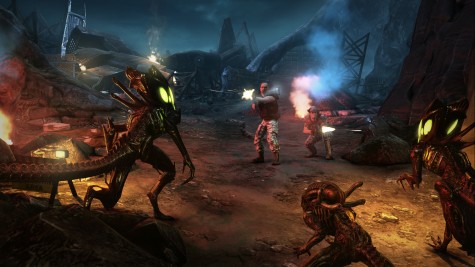 The problem with these versus modes is there just isn’t nearly enough there to prop up the rotten, unfinished structure of the rest of the game. With a clean, efficient net code and trustworthy, tried-and-tested gameplay modes, they’re certainly some of the better elements of the game, but nearly every one of them has been done elsewhere, using more substance, variation, and inspiration than anything found here. You’re sure to find some fun in these modes, but there just isn’t enough to substantiate more than a few sessions of play.

No matter how much you love or despise the Aliens franchise, Colonial Marines is bound to be a disappointment. A handful of clever fan-pleasing references to Bishop and the Space Jockey can’t gloss over the truth about this unfinished, bug-mangled mess of a game. Even though I’ve gone on for far too long already, I haven’t even gotten to touch on the repetitively drab environments, the useless scanner implimentation, the poorly laid out tutorial, the brainless Weyland-Yutani soldiers, the hand-holding co-op mode that doesn’t allow you to stray more than 10 meters away from your team, the game breaking glitches that send you flying into a black abyss, or the hair-pullingly frustrating final stages. The crippling problems with Aliens: Colonial Marines go far beyond those of an unfinished game. These flaws rest at the very core of Colonial Marines’ mechanics, and no amount of time was going to save that. 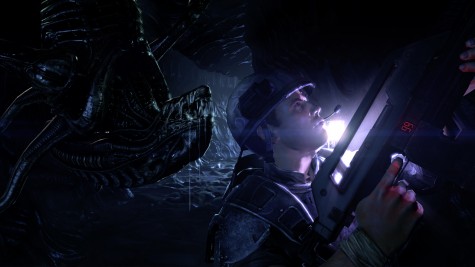 Post-Patch Addendum – It’s important to note that Sega’s recent patch has managed to polish out a fair amount of the visual problems and game-breaking glitches found in Aliens: Colonial Marines. Just about all of the major bugs, including xenomorphs that freeze in mid-air or “dance” in place, have completely disappeared. While the aliens still occasionally move with a glitchy, twitchy speed, they actually feel like enemies instead of irritating and lifeless cardboard cut-outs. However, even with those visual quirks taken out, the core of this game is still plagued by garbage A.I., ugly visuals, pervasive screen tearing, and an awfully constructed story. This patch has made Aliens: Colonial Marines playable, but that doesn’t mean it’s good. 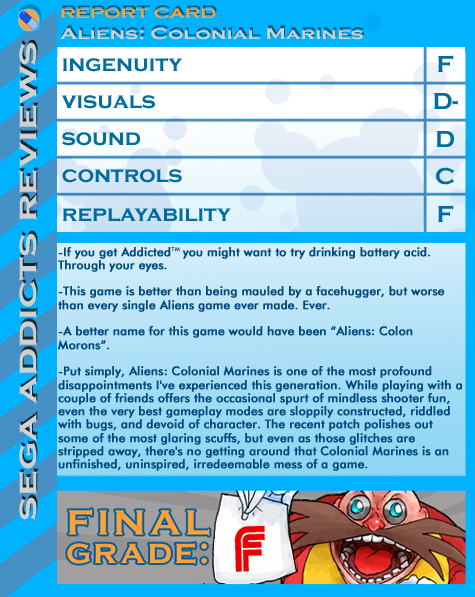 Rise of Nightmares gets a new trailer!