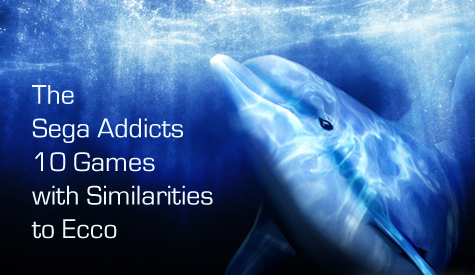 It’s been a long time since we last saw an Ecco game but with creator Ed Annunziata’s recently launched Kickstarter, it appears that there’s a chance we may finally see a spiritual successor to the unique franchise in his game The Big Blue. While it’s unfortunate that the Ecco series has seemed to disappear over the last decade, there have been games released with obvious similarities and potential inspirations from the game. Not only did Ecco break the mold with its realistic aquatic theme but it also showed us a very unique style of game where just playing around with the fluid controls and exploring the beautiful environment were as important as trying to “beat” the game.

We’ve created a list of 10 games we feel have noticeable similarities to the Ecco franchise. Hit the jump to read on! 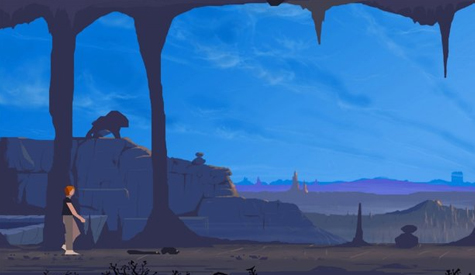 Michael Westgarth: Remember that moment your dolphin friends get sucked up into the sky? Remember that eerie music that plays? Ecco is a game that generates a great amount of tension and atmosphere by continuously throwing you into situations you don’t quite know how to deal with. The feeling of constant uncertainty Ecco gives us, the player, is also one of Another World’s greatest traits. Another World literally starts with the main character teleporting into a pool of water and instantly being attacked by alien tentacles.

The feeling of disorientation is of course amplified by placing players in very unfamiliar environments. Another World, as the title suggests, puts you on a distant world in another dimension with no hope of getting back and every new screen brings wondrous yet deadly, alien threats along with it. Similarly, Ecco is set in the unexplored and also very alien expanses of ocean that cover our world which are filled with all types of weird and wonderful creatures. Eventually the game Ecco on an unexpected quest through time and space to defeat the aliens who’ve captured his buddies. 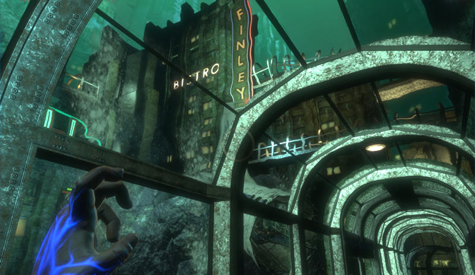 Michael Westgarth: No, I’m not just doing the “they’re both underwater!” The copious amounts of water in both games is by no means Bioshock and Ecco’s greatest similarity.

When I first played Ecco the Dolphin the last thing I was expecting was to see my aquatic friends being sucked up into a portal by a race of aliens that periodically harvest our planet of all life forms for food. While I expected to see the broken underwater utopia Rapture when starting my Bioshock journey, I wasn’t expecting it to be quite so unsettling.

It’s this creepiness that defines both games for me and makes them so uncomfortable enjoyable. as strange as it may sound, stalking Splicers through Rapture’s dark and damp hallways very much reminded me of time spent cautiously guiding Ecco through treacherous underwater caves. Both games give me the feeling that I’m woefully underpowered and both games make me feel just a little nervous every time I turn them on. And in that respect, Ecco and Bioshock are very much the same. 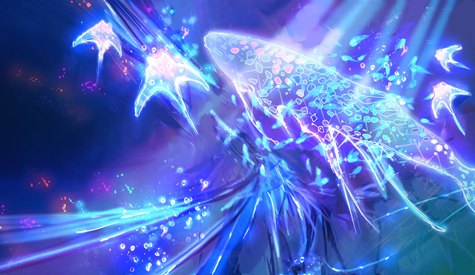 Scott Morrison: Child of Eden is a game devoted entirely to style and artistic direction; two aspects that can also be used to describe Ecco the Dolphin. Both games have captivating color schemes, and what’s interesting is the fact that Ecco’s world is completely realistic while Eden’s is totally imaginary. These ideas in mind, I find it amazing that one can be a spectator for both games and find them to be just as entertaining as the player controlling them. Child of Eden’s gameplay and aesthetic can be very soothing despite its sometimes-chaotic gameplay, which is seen also in Ecco’s tranquil world. Even during intense moments in Ecco, the atmosphere of the game still remains as calm as the water you continue swimming through. Both of these games follow a vibrant theme that few games can replicate without being overwhelming, but do so with a style that makes them a joy to experience. 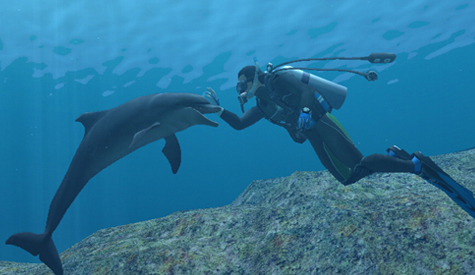 Josh Newey: Ecco the Dolphin may not be the most slavishly accurate underwater game on the market, but few titles in this narrow genre manage to deliver the same level of calming peace and wondrous aquatic exploration. Even as the unforgiving difficulty and cryptic layout held me back, the lovely ocean landscapes kept me interested in pushing forward. The Wii’s Endless Ocean: Blue World takes that notion and spreads it out, offering rich, surprisingly deep, and impressively accurate underwater landscapes for your perusal. Instead of presenting generic tasks for you to carry out in your journey, this game instead opts for something much more simple and open-ended, encouraging you to explore every nook and cranny of its serene and mesmerizing environments. While many found this directionless gameplay a bit banal upon its initial release, a few hours with Endless Ocean can be one hell of a stress reliever. 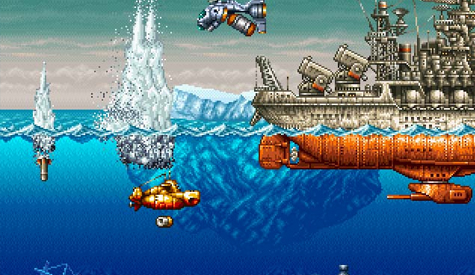 Mike Kyzivat: I know what you are thinking, “How can a game about blowing up stuff and killing thousands of enemies have anything to do with a cute little Dolphin swimming around kissing other fishies?” Well, if you’d just give me a second to explain I will. Sheesh, people sometimes…

While the themes of Ecco the Dolphin and In the Hunt are very different indeed, their controls and some of the backgrounds are not. First things first, both games have an underwater setting, albeit one that looks like a war-zone and the other that looks like one of those hippie posters you hang on your wall. Another similarity is their controls. If you really look at it Ecco the Dolphin’s controls, they are a lot like a side scrolling shooter as you can move up and down left and right. Of course, you’re not doing much shooting (unless you count his Echo location). Ecco can also move in and out of the water. Granted, the sub from In the Hunt isn’t going to be doing back flips out of the water but in a similar fashion it does go to the surface (even if it is to blow planes out of the sky).

Probably the biggest similarity is the fact that in parts of both games you cannot get to the surface and travel through caves and underwater tunnels. An event which happens a lot in Ecco and a few times in In the Hunt. So, the next time you are blowing away evil forces in a combat sub, think of cute little dolphins frolicking in the surf. And the next time you play as a dolphin swimming through blue waters, think of buildings crumbling, explosions, and underwater mines. 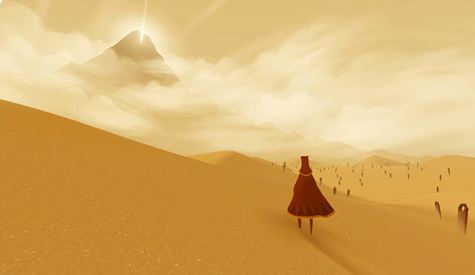 Josh Newey: When I look back at my first experiences with the Ecco franchise, I remember being taken aback by the game’s eerily mystical yet alluringly pleasant tone. By that point my brain was addled with snarky mascots and loud colors, so a game as mysterious and subtle as Ecco was more than just refreshing–it was fascinating. These days, I find myself just as enthralled by That Game Company’s Journey: a subtle, willfully enigmatic, and beautifully flowing experience of a game that’s far more interested in inspiring wonder and emotion than adrenaline-pumping empowerment. Like Ecco, Journey expertly teases the player with little bits and pieces of backstory, imbuing an unanswerable intrigue that keeps us motivated to push on to find more. Mix that with mysterious, open environments and a consistently satisfying sense of flow, and you’ve got a concoction whose roots are firmly set in the fertile soils that Ecco laid down generations ago. 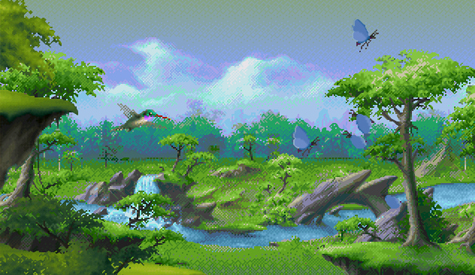 Alex Riggen: Developed by the same team as Ecco, Kolibri is one of the few reasons to track down a 32x system. It’s similarities to the developer’s Ecco franchise are pretty obvious right away as the game is very much a hummingbird version of what Ecco was to dolphins. If you take a horizontal shooter, give the play more freedom of movement by allowed the screen to scroll not only to the right but up and down as well, add a slower more relaxing pace, realistic natural environments and enemies, and finally add in a soundtrack that complements the new age-y visuals, you have Kolibri. Like, Ecco it’s a very unique, nature inspired gaming experience, and it’s rather unfortunate the game came out on such a doomed platform. If this had been a Genesis or upgraded to the Saturn, it’s quite possible that Kolibri would have a cult following in the same way Ecco does. 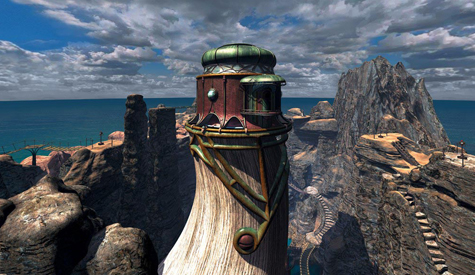 Scott Morrison: Ecco the Dolphin on Sega Genesis gave you little direction, and in turn expected you to figure things out based on your surroundings. To me, I feel no other game “utilized,” this idea more than Myst.

Myst gave you all of the tools to deal with the situations and puzzles at hand, but told you very little about the situation, or how to use the tools given. Much like Myst, Ecco gave you everything you needed and even though it did spell things out from time to time, it was relatively easy to get distracted by your surroundings and completely forget what your objective was. Intriguing worlds encompassed both games, to the point that I still have not finished either one due to the fact that I would get so side-tracked to the point of getting bored with my original objective. This is not necessarily a bad thing at all, because it shows just how captivating the worlds are in each game. The only other thing left to compare is whether or not Ecco could also be beaten in less than 11 minutes. Any takers? 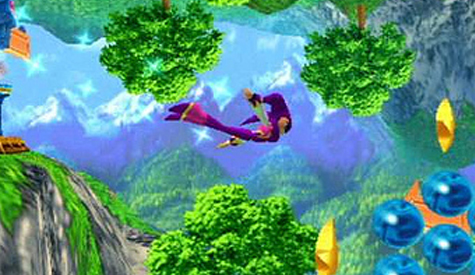 Mike Kyzivat: Both NiGHTS and Ecco have a very whimsical feel to them and there are parts in NiGHTS where you are moving around under water, but what really makes them long lost cousins is their controls and their emphasis on performing tricks.  Like Ecco’s controls, NiGHTS has a very floaty control scheme, almost as if you are playing underwater and just like Ecco you can move in the same directions up, down, left, and right.  The tricks and flips are the thing in NiGHTS that reminds me most of Ecco the Dolphin.  In NiGHTS, you can do a 360 spin by moving the controller in that direction, or you can perform various spins, poses, and tricks by pressing a button while flying, which is very similar to Ecco where you can jump out of the water and do various flips and spins as well.  So, whether you want to do stunts with a star faced Dolphin or a jester from your dreams, Sega has got you covered. 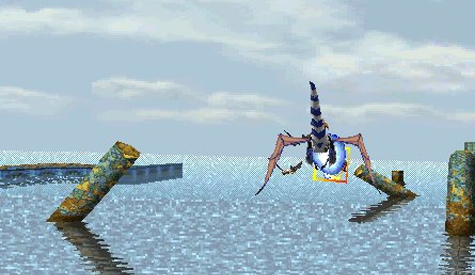 Tom Kyzivat: To be honest, I never played a lot of Ecco the Dolphin, but I do like games where you play as an animal.  And the cool thing about Ecco was that he was a realistic animal, not some Sonic knockoff with gloves and sneaks who raises an eyebrow in a brazen display of ‘tude.  So, while the dragoon you control in Panzer Dragoon is not necessarily realistic, it is presented in a relatively realistic way.  And the fact that (although on rails) you can fly the dragoon around with wild abandon through immersive, pretty nature backgrounds only helped me associate the games with each other.  But if I’m being honest with myself, I’d also mention that controlling a freakin’ dragon is a helluva lot cooler than a dolphin.  Good news for nerds, bad news for hippies.  Sorry, hippies.  Y’know what?  I’m not sorry.  Get a haircut.

The Sega Addicts Speak!: Saturn Games We'd Like to See in HD

The Sega Addicts Top 10 Games with Similarities to Panzer Dragoon