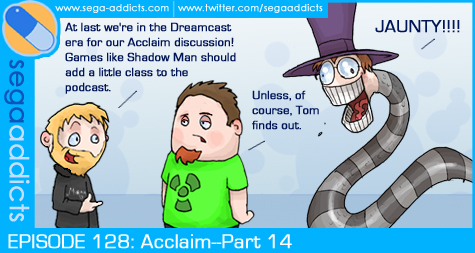 On this week’s podcast, Tom makes his grand return and brings free chocolates for everyone! Unfortunately, they’ve been in his pocket since his trip back from Utah so they’re all a giant melted mess filled with chucks of dryer lint, change and old receipts. We all politely declined.

It didn’t hurt his feelings though as he was in high spirits as we went on to talk about Sega and some Acclaim goodness for nearly an hour! We even finally made it to Shadow Man on the Sega Dreamcast, but don’t worry listener, as we still have a couple Acclaim on Sega episodes to go.

Have a look at Iris Angel, a cancelled Dreamcast strategy game

After House Episode 31: Bayonetta in Playboy is not the main topic