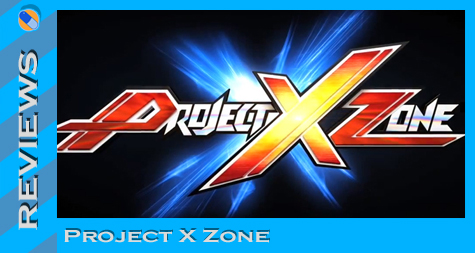 The combined forces of Namco Bandai, Capcom, and Sega in one game sounds like the perfect recipe for an incredible adventure no matter how you slice it, right? Throwing those three companies together with their roster of video game characters could amount to any possibility of gameplay.

Namco Bandai decided to throw these ingredients together into a tactical RPG and sprinkle in a little 2D-fighting to create Project X Zone. Does it work? Will our heroes emerge victorious? Can Bruce Willis really fight zombies with his bare hands? Will the Servbots bring enough lunch trays to the battle? Will I stop asking pointless questions and review this game? Hitting that jump button is the only way to find out!

I will admit that when I first heard of the existence of this game, I never thought I would actually get to play it without importing the game or a Japanese 3DS, but fan demand was high enough and here I am writing about my experience. The opening scene of this game also makes me wonder how many petitions were initiated for a crossover anime based on this game, because it was pretty entertaining. Fandom in tow, I jumped into Project X Zone without any expectations, since a tactical RPG would not have been my first choice for a crossover game. However, their decision to use the TRPG genre was what piqued my interest in the first place. 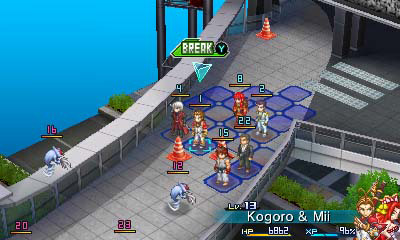 When beginning Project X Zone, you are treated to a tutorial involving 2 characters whom I immediately did not recognize, but happily found out they were created specifically for this game after reading their biographies in the “Crosspedia,” section. The first familiar Sega faces in the game are Akira and Pai from Virtua Fighter, who are soon accompanied by Jin and Xiaoyu from Tekken. To round out the 3 franchises, Ryu and Ken of Street Fighter fame show up, and this colorful crew begins their journey through dimensions and mystery.

The main portion of the game takes place on a grid-based battleground, where your characters move a set number of spaces like in any tactical RPG. The levels take place anywhere from the worlds of Ghosts & Goblins to Dead Rising, to even Gain Ground. When moving, however, you actually are controlling a team of characters composed of your main duo, and sometimes an additional, “Solo,” character. Each team can also call in another nearby team for “Support,” if you choose to fight close enough to them on the grid when approaching enemies.

The battle system itself is done a bit differently than most TRPGs, as it has the aesthetic of a 2D fighter similar to Street Fighter, minus any free movement. Both you and your enemy are stationary, and you have a set amount of moves depicted on the bottom of the screen below your team, with your Solo character initiated with the “L” button and the Support team mapped to the “R” button.

Each attack, outside of the default of simply pressing the “A” button, involves the “A” button and 3DS slide stick. Each move throws an enemy to a different height, and can be combined with your Solo character and/or Support team to acquire “Cross” attacks. So in essence, you can have up to five people fighting on-screen against a single enemy. When these combo attacks happen, it is reminiscent of the frenetic atmosphere in Marvel Vs. Capcom 2, which I welcomed with open arms. 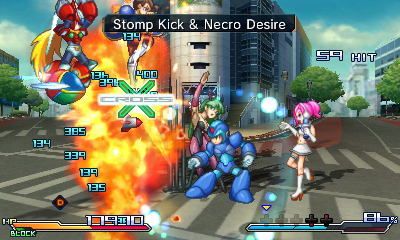 With every hit, your Experience bar grows, and once it hits 100% you can perform a special move with your team duo. The artwork during each battle looks great with very detailed sprites for every fighter, but really looks its best during the special attacks when it breaks into anime-type caricatures with sprites performing moves in the background. I found myself impressed with the appearance of every special move, whether or not I was familiar the characters or their source material.

The plot is rather insane, but simple enough for the purpose of a crossover game: different dimensions, worlds, and time periods are mixing together and the enemies of all those worlds want to rule them or destroy them. But in a game with a character roster this intense, are you really worried about the story? I wasn’t. However the most entertaining portions of the story are those moments when you have characters from different games conversing with each other and dropping references to their own adventures. Even better, most cut-scenes end with Frank West snapping pictures of all the women. “Fan-tastic!” 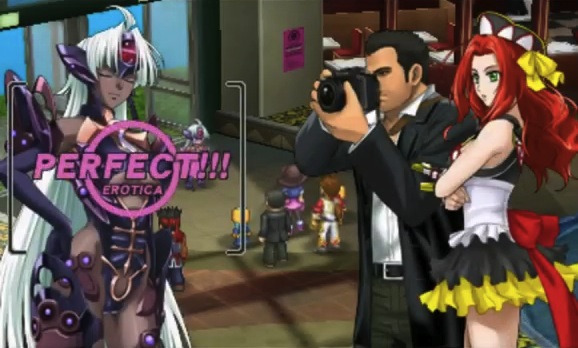 When starting out, most of my time with Project X Zone was spent saying, “Oh my gosh is that seriously him?! That’s awesome!” or the occasional, “What the heck game is she from? And how can those move like that?” Still the best moment, because it was the most unexpected, was when I boarded a ship in the middle of the ocean with a team composed of Street Fighters, Virtua Fighters, and Dark Stalkers to then run into Chris and Jill from Resident Evil as they are killing zombies with the help of Bruno Delinger–also known as Bruce Willis–from Die Hard Arcade and Dynamite Cop. Yes, Bruce Willis is essentially in this game. 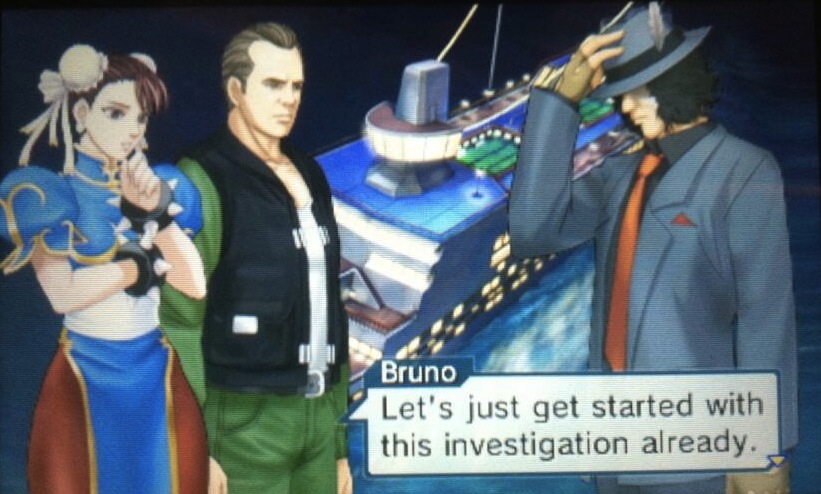 Project X Zone is a good tactical RPG for gamers unfamiliar with the genre, as it brings you in rather gradually, but keeps things fresh with the fighting sequences….At least, that’s what I thought initially. The procedure of each level is thus: enter map giddily once realizing what game it is from, talk to villain and/or meet some new heroes, move teams around to fight grunts, mini-boss appears, fight mini-boss, plot extends by realizing once again you have no idea what world you entered, exit map.

Each map takes about 45 minutes to an hour to complete, depending on how much strategy you follow or how much you button-mash during fights. It wasn’t until Chapter 16 that the game tried something different by having me hunt down goblins before they escaped the level, followed by the next level where I had to plant some explosives while rescuing a teammate before my turns expired.

Let me say that again: Chapter 16 was when the game did something different. In a game composed of characters ranging from Mega Man X and Tales of Vesperia to Zombie Revenge and God Eater, you don’t exactly have different character classes or magic spells. The game’s variety relies entirely on fan service and goofy dialogue between characters, which would be fine if the game were half the length that it is. I will come clean and say that I am not a fan of Tactical RPGs in general, but I feel that the majority of the people who grab this game will base their purchase entirely on whether or not their favorite character is in it – not because they are looking for an in-depth TRPG. 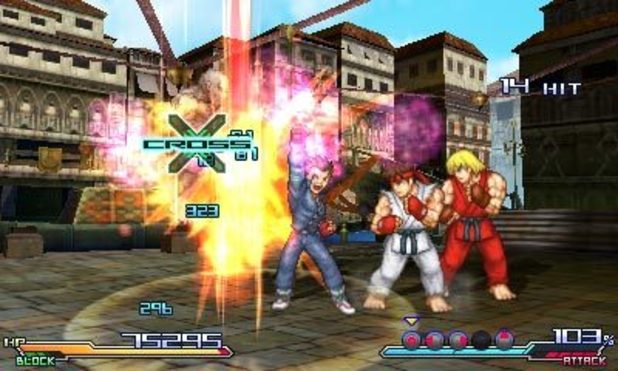 To be completely honest, I feel like this game is alienating a large portion of the fanbase that it’s trying to target. As a Sega and Capcom fan myself (I have nothing against Namco, I just don’t know their games as well), I’m not a big RPG or TRPG player, but do enjoy the occasional RPG. This game could have appealed to a much larger audience had it chosen a different genre such as 2D fighting, beat-em-up, 3D brawler, or even a regular RPG. Look at Smash Bros, or Sonic & Sega All-Star Racing for instance. Anyone can jump in and play those. The fact that most of the characters in this game come from action/adventure games and then pits those characters into a slower genre feels almost awkward.

Don’t get me wrong, this game looks and plays great, but when I’m over 25 hours into the game and finally see Capcom’s most recognizable blue bomber, then I feel like I’ve been playing a bit longer than I should have to reach what I found to only be the midway point in the story. I understand TRPGs are long and in-depth, but they also have character classes, varying mission objectives, and a plot that doesn’t recycle itself as often as episodes of Dragonball Z. 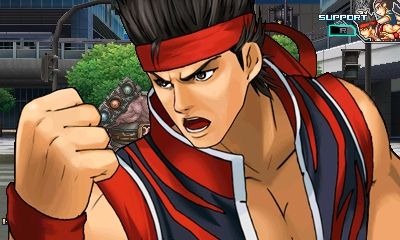 Part of me feels that if the battle sequences were actually 2D fights with fighting controls, this game would have felt a lot fresher. I understand the production time would have doubled, and there would be little chance for any balance, but the fights feel rather one-sided when you have 5 people on-screen anyway.

As a fan of the majority of this game’s cast, I would have preferred to see these characters get thrown together in just a 2D fighting game rather than a balanced tactical RPG. Then again, wrestling matches have always been more entertaining to me than watching a game of chess. Maybe I’m not the person this game was targeted towards, but the cover and every single trailer definitely said otherwise. 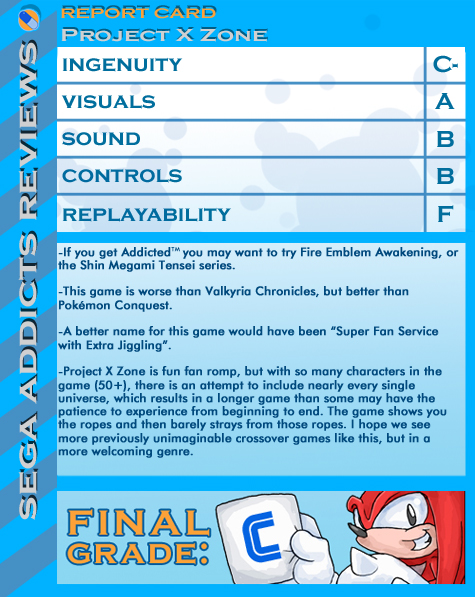