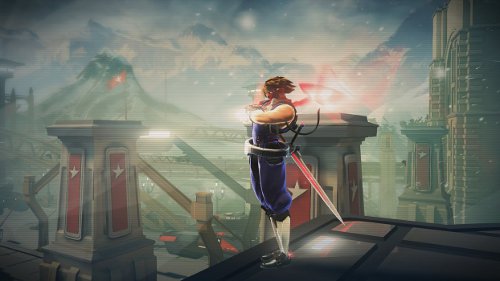 Strider is one of the most beloved games on the Sega Genesis, and looking back it’s easy to see why. It truly was quite unlike anything on the system and it really stands out as a retro classic. It’s just a shame the franchise never took off as only one sequel was ever made… and that was in the PS1 era!

So as you can tell it’s been a while since we’ve seen this franchise, which is why the recent reveal of a new Strider game shocked and delighted in equal measures! But is this really a good thing? Well to find out this week I asked the writers of this very site the following:

What are your memories of Strider, and what are your opinions of this new game being made by Double Helix?

What were our fabled answers? Hit the jump to find out!

Mike Kyzivat:
Strider is one of Capcoms best, weirdest, and most creative arcade games they have ever made. I fondly remember the original arcade, and the nearly arcade perfect Genesis version.

I remember video game magazines at the time saying that Strider didn’t do very well in the arcades. Well I don’t know what arcade they were hanging out at but where I went (the Aladdins Castle in St. Charles Mall IL), there was always at least one guy hogging the machine all day. It was so frustrating because the game looked so cool, so fun to play, and yet, was just out of my reach. But there were rare occasions when no one was playing it, so I would immediately capitalize on it.

The game was an amazing mix of side scrolling, climbing, and bat shit craziness. It was the first game I know of where the playable character not only jumps, but does a sweet cartwheel when he does. You start off in a Russian level with all kinds of communist imagery, slicing and sliding though the terrain. Then all of a sudden you get trapped in a room with a giant sphere that has it’s own gravity; so every time you jump toward it you start orbiting it while it moves around. It was so cool!! Then you fight a Dolf Lundgren look-a-like that spouts fire, and to top off the first level you take on a centipede carrying a hammer and sickle. The centipede climbs all over the level and you have to ride and cling to it’s long body so you can make your way to the head and slash it with your sword. That’s the kinda gravity defying cool crap you get to do all throughout the game. It’s always giving you new and interesting ways of fighting enemies and climbing through a level that it never feels like: “I’ve done this before”.

And the Genesis version is nearly identical to the arcade version. How awesome is that!? Just about the only bad thing about the home version is that horrid cover art…ugh *shiver*…what is with that hair?

I’ve seen the new Strider game from Double Helix, and it looks pretty promising. Very much like Metroid, Symphony of the night or more recently Shadow Complex, where you are only limited in where you can go by your abilities. The one thing Double Helix has to worry about is keeping the fighting and platforming new and different like the arcade did. Because if I’m going to be traversing through this big samey looking complex, I better not have the samey combat all throughout the game as well. 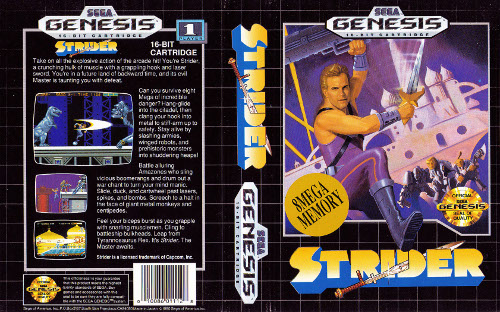 As a huge fan of action games in general, I’m happy to finally see Strider return. The original game was one of the better Sega Genesis exclusives and the sequel was pretty good as well. I’m actually surprised it took Capcom so long to announce the new entry in the series. But maybe it’s for the best that they took their time with this sequel.

I know many people don’t trust the developer on this one, but since Double Helix Games was apparently completely reformed to work on the new Killer Instinct, I’m willing to stay optimistic. I think we should at least give them a chance.

While a new Strider developed by Platinum Games would be my wet dream, I’m just happy to at least see a new game exist. Besides, judging by that gameplay reveal trailer it looks quite good. 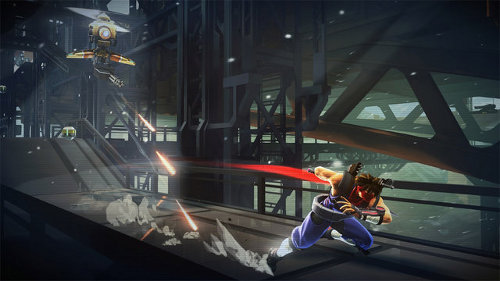 Stevie Grant:
Honestly it surprises me as much as anyone that it took so long for us to get another Strider. With all these retro remakes and reboots it’s taken a good while when you look back on it. I mean think about it, Rocket Knight got a modern HD sequel before Strider, which is often considered one of the best of it’s generation!

But not everything goes as planned and I’m sure there’s some reason it’s taken us a considerably long time to see another instalment in this franchise. Although I am concerned by Double Helix’s involvement. Although when saying this they haven’t really made their own game, so it’s tough to judge them when all they’ve done before are sequels in much more popular franchises. I guess the quality here depends on just how much the team liked the original, and going by it’s cult fan-base, I like those odds. 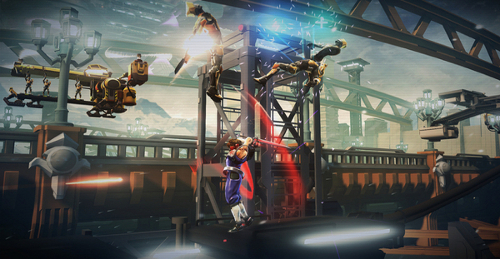 But what about you? Are you concerned by this or are you just happy to see another Strider game full stop? Let me know in the comments and we’ll get back to you when we speak once again next week!