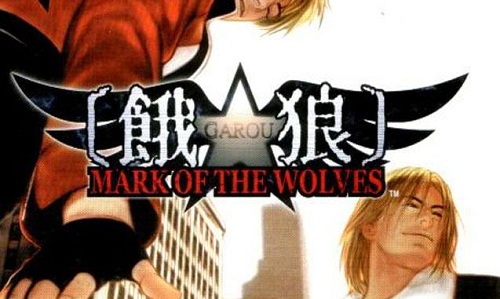 Or Fatal Fury – The Mark of the Wolves, depending on your region, although distancing itself from Fatal Fury does seem understandable with only one returning fighter from the original cast. Originally a 1999 Neo Geo arcade title, it was eventually ported to both Dreamcast, PS2 and XBLA. As for which is the best, I couldn’t really comment, but I know which one is the biggest proponent of 2D fighting games for me at a time where I was still routinely enjoying Tekken 3. A dark time for sure.

So what makes Garou special? Initially, very little. In fact it replaces the multi-lane system from earlier games, your power up bar no longer depletes if you wait too long to use it and the special moves are familiar Capcom style QCF(x2) inputs. In fact with four attack buttons it could be considered a little too simplistic, but there in lies the true quality of Garou. People often tout the phrase ‘Easy to pick up and play, but tough to master’, and I wouldn’t exactly say that’s true of Garou. It’s easy to get a handle on the character’s and their varied fighting styles, from the Geese Howard/Terry Bogard mix of Rock Howard to infuriating speed and projectile proficiency of Hokutomaru. However, the pace of the game is quite unlike anything else.

For one, the Just Defend system similar to the parry from SF3 or Melty Blood allows you to not only defend against all damage from an attack, but heal as well. Not only this, but it’s actually mapped to the same action as block, just with stricter timing. Alternative fighting games either map the parry to a foward-block, giving up the turtling safety found in Garou or an entirely different button as Melty Blood embraces. The power up bar as well builds up and retains over each round of a match as a two-charge bar, allowing the player to use either one or both charges to power a special attack. The major point to this is that they are incredibly punishing. If you meet a two-charge attack head on then it will almost universally halve your energy bar. The parry system may sound easy to abuse, but regular combo attacks can also be brutally damaging, meaning the price for getting hit is a constant threat. What you have then isn’t so much a simple fighting game as a pure one. The regular attacks do enough to make you feel each blow was worth connecting, and that the special attacks are really just that. Special.

The game also introduces the TOP system where before a fight you allocate 1/3rd of your energy bar to fuelling a powered-up state. When your energy stays within that 1/3rd, your fighter is stronger, heals, and has access to a powerful new at-will attack, with no cost to the user. This doesn’t seem too complicated, until you realise that your placement is also reliant on your opponents placement. Do you try to combat his starting TOP with yours? Or do you choose to try and rob him of his first 1/3rd so that when you’re injured into your TOP state, he has to try and take the brunt of it without his own TOP left to fall back on? Not to mention the TOP attacks also have the opportunity of staggering an opponent who’s blocking, which makes them incredibly tempting in terms of pressuring opponents, but a missed TOP attack leaves the fighter incredibly open to a swift punishment, which could completely ruin the advantage. Even worse, if they have their charge bar filled, it could be that one mistake that entirely loses that player’s life. 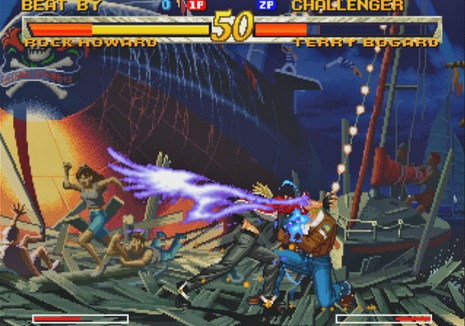 In short, I adore the fighting style of this game. The pace is unrelenting, and the simplified control scheme allows for a much more engrossing and varied fighting experience. What really sells this though is the overall incredible aesthetic of the game, beautifully recreated by the arcade friendly Dreamcast.  Not only is the sprite art as fluid and detailed as the arcade release, but the music has actually gone through some improvement. No actual rearrangements as you might expect from a re-release, but there’s a clear difference to stop you from going back to the original, although the overall accompaniment isn’t entirely memorable. The sound effects however help to bridge the disconnect between sprites, so 2D sprites really look and sound like they’re colliding head to head and fist to fist. There maybe much more accomplished soundtracks, for instance Big Bang Beat‘s dynamic BGM, especially for Ryouga and Devil Daigo, but few fighting games deliver such a tremendous sound scape for a battle, with even fewer attacks sounding quite as fierce as they do here such as with Rock Howard’s Deadly Rave Neo.

Ultimately, it’s a fantastic fighting game, and for one originally released in 1999 has aged exceptionally well at its core. The only part that suffers really is where fighting games have now expanded since. The offering is incredibly basic, which was fine at the time even for a console port, but now isn’t so easily glossed over, hence the criticism of KOFXII‘s vanilla release. Now a fighting game without a full story mode for characters, a challenge mode separate from survival mode, online play, unlockables and anything in-between is considered somewhat unusual, which probably isn’t an entirely justified attitude. Garou has undeniable charm, with horrendous storylines and unbelievable dialogue (Grant’s “Oh…gaaaaaaaaaaaaaaaaaaaaaaaaawd!” is an unforgettable line for any villain, never mind a final boss) but such appeal isn’t universal. Gamers now are privileged to experience fighting games which endeavour to create wonderful scenarios, branching stories and expanded universes, so I couldn’t fault Garou for not providing something that until now I wasn’t aware fighting games could really benefit from. If anything, it shows fighting games that if they want to release a straight arcade port without the modern day conveniences, they just have the make sure the main game is this damn good.

NiGHTS and Sonic HD it up in October