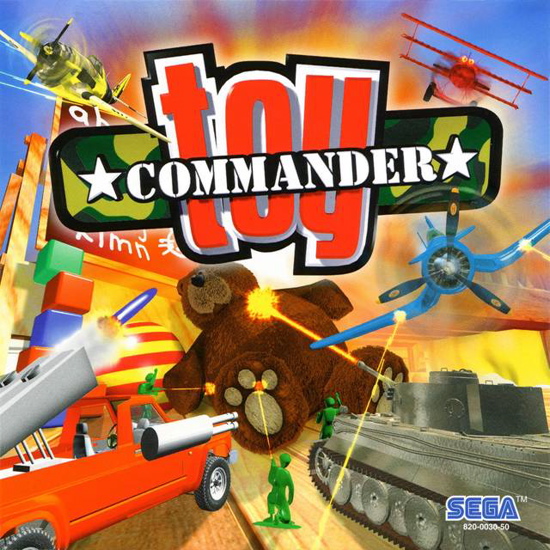 I’m a Goozex fiend. There, I said it.

It’s not difficult to accept or embarrassing to admit, especially now that the newly added retro trades have allowed me to snatch all those old Genesis and Dreamcast games that the plastic Ninja Turtles wallet of my youth couldn’t even begin to comprehend. I am always browsing the site, checking up on what forgotten gem has been willingly given up by some nostalgia-immune fool in return for some new, forgettable FPS whose shelf life is ticking away from the day it reaches the trader’s mailbox…

I recently decided to check the pricing and availability of one of my all-time favorite Dreamcast games, Toy Commander. Would it be hard to acquire these days? How many points would it go for now? I have my copy. It sits proudly in my library, wedged lovingly between Shenmue and The Typing of the Dead. But I had to know if it was getting the appreciation it deserved on the ol’ retro market.

What I found grabbed and wrenched at my gullet. A total of 22 copies, in various conditions, are waiting to be given away. People are apparently climbing over one another to give up one of the most unique, varied, and whimsical games in the Dreamcast library. What? Why? Luckily, I was able to calm myself before I up and declared “Shenanigans” and grabbed my broom. Toy Commander deserves better than this wholesale giveaway. And here’s why.

You fight Godzilla dressed as a bunny. 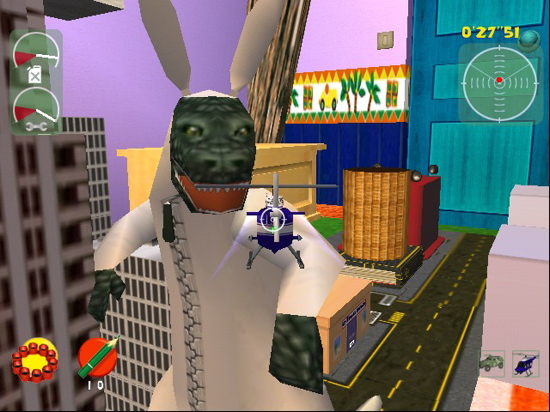 What… You want more?… Fine.

The “story” of Toy Commander is pretty plain, and should be instantly recognizable to anyone who grew up in love with his or her imagination… Or to anyone who’s seen Toy Story. The plot follows a boy by the name of Andy who becomes enamored with a new set of army toys. Andy’s old toys (consisting of, amongst others, a Pegasus rocking horse, some baby stacking rings, an old RC car and a monstrous Teddy Bear) become jealous and decide to revolt and destroy these playtime usurpers. You, as Andy, have to fight them off with your new toys. That’s basically what’s outlined in the manual. Yeah. Nothing new.

Mirroring the simplicity of the story and graphics, the mechanics of the game are deceptively easy to pick up. I say that because the story’s predictability is belied by the gameplay’s surprising depth and variety. Basically, you play as several different types of military vehicles, sent on wildly varying missions throughout separate rooms of Andy’s home. As the game continues, you unlock more and more of these missions, set increasingly larger sections of the house. By the end the experience is 50 stages wide.  This is a huge amount for a game that so rarely repeats itself.  Despite what you’d expect, that age-old experience of déjà vu gameplay is almost non-existent in a play-through of Toy Commander. 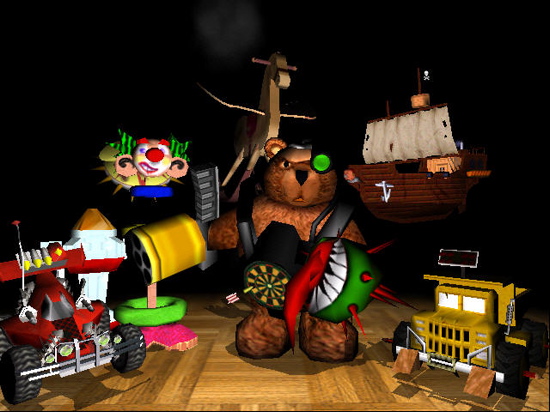 It’s hard not to crack a smile when you read each mission briefing. The tasks that come with some of these stages vary so much and get so ridiculous that you will find yourself fascinated by the game’s consistent capacity to give you something new. Some of the missions are what you’d expect from a military-based game (rescue the army men, protect the base), some of them are racing (um… win the race), and some of them are menial household tasks transformed into elaborate operations (using a plane to push eggs into boiling water, airlifting sugar cubes to a cup of coffee). While that simplicity can sound tedious, the sense of scope and constantly shifting gameplay keeps it interesting and really fun. Here are a few of my personal favorites from the first half of the game:

Insectophobia:
A great example of the game’s massive, multifaceted level design and        sense of humor. In the mission, a spider has your chopper captive in his        web. As a bulldozer, you must save the chopper and burn off the          webbing in an ashtray. From there you take control of the chopper and fly to the bathroom, down into the toilet, through the drainage system, and into the sewer. There, you’ll fight a giant, spitting cockroach. Once you have exterminated it, you can return to the surface to kill off the rest of the cockroach infestation. The sheer creativity of this level always has me grinning ear-to-ear.

Agent Green:
This level is one of my favorite “everyday task” missions in the game. A pair of stinky shoes threatens to kill off a toy farm. Using your tank, you must venture under the stairs and up a series of ramps to get to the deodorizer. All the while, wind-up mice are slamming into you and the deodorizer can to set you off course. While the constant bombardment by wind-up mice can be a little irritating, the humor and creativity of this mission is undeniable.

Chuck Amok:
Alternating between an armored car and a helicopter, you must save a plastic city from a wannabe Godzilla named Chuck. And he’s dressed in a bunny suit. If you need more explanation then I can’t help you.

Emergency 9-1-1:
A plastic city is burning down. You need to drive a truck down to an enemy fort in the bathroom. Once there, you’ll shoot down all enemy fire so that you can fly in as a helicopter to rescue the captive firemen. After your firemen are collected, you guide a water bomber down to the bathroom faucet. The water bomber fills up in the sink, then flies out to the city and douses the fire. Your firemen drive down in a fire truck and save the stuffed penguin. The variety within this level alone fantastic. 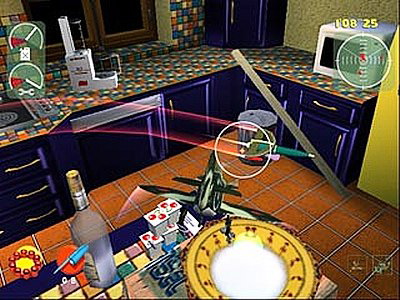 These levels showcase No Cliché’s complete and absolute commitment to the quirky mixture of warfare and goofy whimsy in this game. These tasks replicate that childhood submission to imagination and the elaborate scenarios that can be created with a few chunks of plastic and a couple hours. While playing some of these missions it’s hard to stifle the memories of building mini forts out of cereal boxes and video tape cases, inside of which your Jurassic Park and Bucky O’Hare figures would wage war.

That creative devotion to resourceful youth extends to the game’s artistic design as well. Enemies of all types hide out in toilet paper roll watchtowers in Lego castles, shooting you with colored pencil rockets. You climb up ramps made of biscotti boxes and CD cases, so you can fire back with your pencil sharpener rocket launcher and pink eraser bombs. It was this kind of unabashed devotion to simple, goofy fun that made me fall in love with the Dreamcast in the first place. 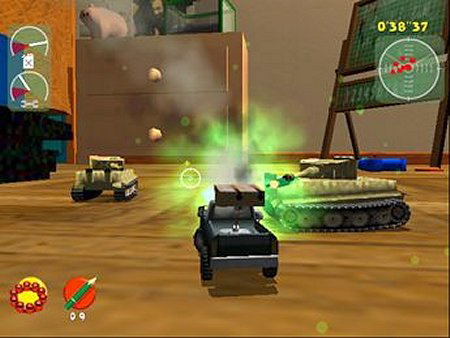 The controls of the game are admittedly the weakest point, especially by today’s standards.  It can get pretty frustrating trying to direct some of the game’s 30-some-odd vehicles, especially when so many levels come with time limits that you must beat in order to reach that room’s boss.  There are certain missions that will have you gingerly navigating extremely elevated, narrow roads in a truck that handles like a vending machine with wheels.  Luckily, the variety of the gameplay again comes to the rescue. You are never stuck in a particular plane or truck for too long, and while many of the vehicles handle identically, it’s nice to given a different toy to play with almost every other mission.

I cannot overstate the almost overwhelming size of the rooms you’ll be playing in.  Some of the best experiences in the game come just from exploring a freshly unlocked area, with new nooks and crannies that are perfectly tucked away, waiting for you to discover them.  This exploration never becomes tedious or overbearing, either.  There are enough secret paths, roads, and clever tricks (ramps that let you drive on walls!) to make a simple drive across a kitchen table into a perilous journey around falling peaches and exploding tuna cans.  There are often moments where you find yourself in one remote section of a room, on a ceiling rafter overlooking the bedroom, and it hits just how much you had to do to get there.  Don’t let the simple graphics and play mechanics trick you.  The real depth of the game comes with the size and surprisingly intricate structure of No Cliche’s level design.

To me, the multiplayer of Toy Commander is a true representative of what “sandbox gameplay” should have been back when the term was first being hyped. You are given free reign over one of the expansive rooms of the house. Each player is given a base in their own section of the stage, along with the toys and weapons you receive in the single player campaign. Have at it.

When I think back on how I used to play the game with my buddy back in high school, I realize just how fitting the word “sandbox” is for that kind of unstructured, open-ended battle. We both set up our camps and cornered off our respective areas of the rooms. We set up guidelines, rules, bartering systems, and even religion within our respective sectors of the kitchen, bedroom, or hallway. If either stole weapons from the other, or if religious statutes were disrespected from the other side, then war was declared. It became so elaborate and ongoing that we actually began to map out its mythology in a notebook. Yeah, very nerdy, I know, but our overblown, overwrought matches were just results of inspiration gleaned from the game’s relatable premise.

Toy Commander was, is and will always be a major player in my library of DC classics. It’s a wildly creative, colorful, surprisingly deep, and genuinely entertaining experience. Where it succeeds most, however, is its unparalleled sense of relatability. The game is essentially in the first person, putting you in Andy’s shoes, from whence you experience and play within his imagined playground. Just try playing the first few missions without being thrust back into your memories of backyard battles and anthropomorphized plastic.

If you’ve never experienced this game, I implore you, pick it up from Goozex. It is a representation of the best qualities that Dreamcast to offer – it’s creative, unique, colorful, humorous, and fun. If people on Goozex are so eager to lose this underappreciated gem for a mere 100 points, I would hope there are more people out there who’d be interested in giving it a try.  As they say in the techno-ey music of the game: This is your mission.