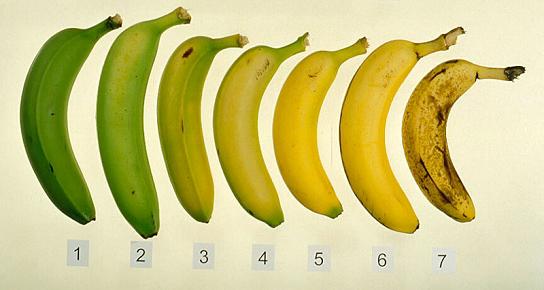 Number 3 could you please repeat the phrase "Give me your money"?

I like bananas; I like them a lot actually, that’s why I work for a site called Banana-addicts. But despite my love for and addiction to bananas, every so often I eat a banana that just doesn’t taste good. This is a painful moment that banana lovers everywhere end up going through at some point, because of that I refuse to let us suffer in silence any longer.

Today I’m doing a double feature: un-ripened bananas and rotten bananas. Hit the jump to learn about why you should avoid these bananas at all costs. 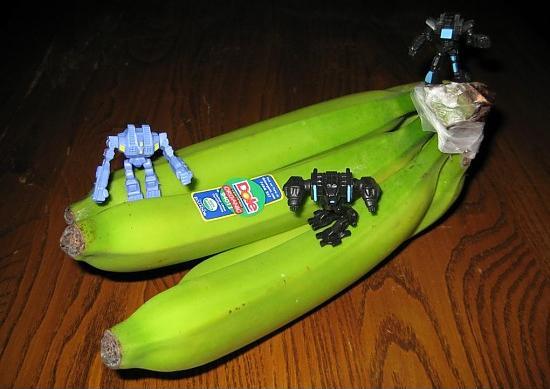 This banana is ours now.

We’ll start with un-ripened bananas. Seriously, what’s going on with those things? They aren’t even yellow yet! It’s like the farmers were growing bananas but their farm got foreclosed or something so they had to pick all the bananas and sell them right away before they were ready. I can’t eat this yet. You go to the store because you’re out of bananas, you buy these things, and you can’t even eat them. And then stores have the nerve to charge you full price for them. You’re paying full price for something that isn’t even done yet.

The controls on this banana suck too. You know, controls, how it peels, that’s what that is called, right? Well whatever, you can’t open those damn things. You pull one way on the stem and it cracks a little bit, so you pull the other way and it cracks on the other side. It’s still not open, but there are now 2 holes in it and the top of your banana is all mushy. What a pain in the ass. Don’t even try opening these bananas with their stem, just get a knife or scissors and cut off the top part. Once you finally get the banana open and you try to take a bite of it you’ll notice that it’s a lot harder than normal too. It’s almost crunchy. Like I said before, you really can’t eat bananas like this, it’s almost better to not even try. 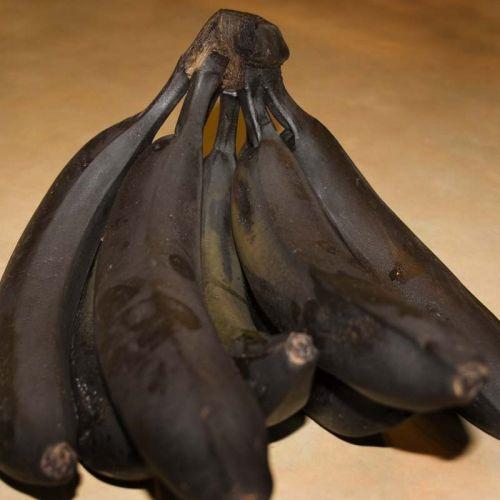 The whole bunch? Such a waste!

So what happens if you leave these bananas too long waiting for them to ripen? Well they become rotten bananas, our second Not-So Tasty banana. These bananas aren’t yellow either, but unlike un-ripened bananas, which are green, these ones are a really ugly brown. They don’t feel right either, they feel really mushy and soft, and if you wait long enough they get this weird oil stuff that develops on them. I thought that it might just be banana juice, but boy was I wrong, it tastes terrible! The banana itself has a really strong taste that isn’t as pleasing and delicious as a regular banana.

This banana controls pretty well, almost too well actually. The peel almost falls apart when you open it. That’s not really a bad thing, but it’s a definite sign that something is wrong with your banana. The only problem with the controls comes when you’re trying to eat the banana. The banana is usually so mushy that it’s almost a liquid so it’s really hard to keep it upright. Since the peel comes off so easily you pretty much have to balance a partially liquefied banana for the whole time you’re eating it. The taste isn’t too bad depending on how old the banana is. The general rule here is if the peel is more yellow than it is brown you can still eat it, but sometimes I find it’s ok to eat them as long as there’s any yellow at all on the peel. Usually they don’t start leaking the weird liquid until after that.

One good thing about this kind of banana is that you can cook with them even after they start leaking, so it’s not a complete waste. Older bananas are actually a lot better for cooking than properly ripe bananas, but if you really want to eat a banana now and you don’t want to wait an hour or so for banana bread you’re out of luck. Or you could take a chance and eat it, but chances are high that you’re going to get it all over yourself instead of in your mouth. HA!

Overall it’s hard to say which one of these bananas is worse. On the one hand you can actually eat rotten bananas, or at least cook them into something, but they make you really messy and take longer than you might want to cook. On the other hand you can’t eat un-ripened bananas until they ripen a little bit, but they will eventually turn into the bananas you want. Personally I’m a fan of banana bread and stuff like that, so I’d choose the rotten bananas over the un-ripened ones, but I’d still rather have a proper banana than anything else. If you can, avoid both of these bananas, unless you really want to cook or struggle to get something open.