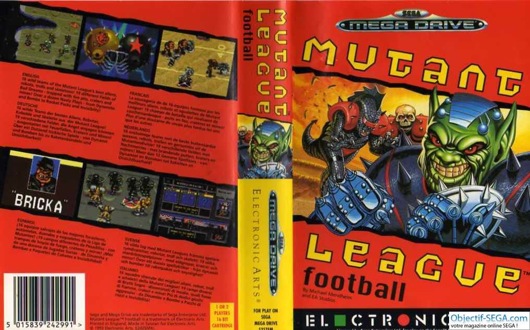 A few weeks ago, I wrote a piece for Freaky Fridays about Mutant League Football.  Andrew Galbraith also professed his love for it.  Since then, I’ve come back to the game again and again.  Not being a fan of sports games in general, I want to find out why this little gem keeps dragging me back for more.  So hit the jump for my Retro Review of Mutant League Football, developed and published by Electronic Arts.

With all the customizable options in today’s sport games, none has taken field choices to the level that Mutant League Football did.  Choosing a field isn’t just an aesthetic layer, but a potentially game changing decision.  Some arenas are filled with rocks that can be used as great blockades for running plays.  Others are teeming with bombs and explosive devices, just waiting for the right misstep so they can blow players into oblivion.  I’m glad to say the oddest one isn’t even set in space, where you can fall into a never-ending abyss.  No, the strangest field has purple rubber turf.  When you’re tackled, you bounce in high in the air with a satisfying stock boing that cartoon bounces are so well known for. 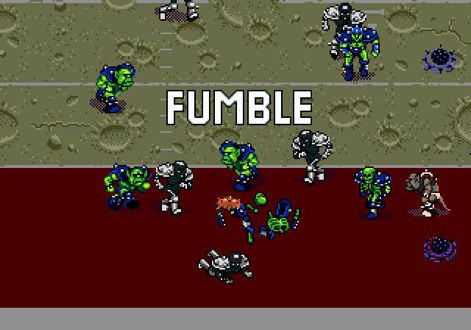 Play names are either easily understandable or fantastically hilarious.  Would you care to run right or blood and guts?  Are you more interested in Da Bomb or a QB sneak?  Navigating the playbook is a simple and intuitive.  There are running plays, throwing plays, special plays, etc.  Each play is laid out nicely, play routes being mapped to buttons for instant recognition.  When you choose a play, three are on screen so if your opponent is watching, they can’t be sure what you just chose.  Plus, picking a play is so fast; they won’t have extra time from having to decide what defense to run.  As in real football, defensive play calling is essential to victory.  If you call the sweep left correctly, their running back is going to be taken down instantly, losing a few yards in the process.  And everyone’s favorite play, Nasty Audible C, can always be chosen at any time.  That ref better play it fair if he doesn’t wanna get split into a few pieces. 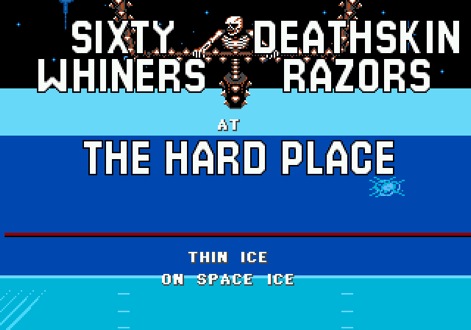 The passing game can be devastating, but unfortunately mostly for the offensive side.  When your quarterback is in the pocket, three screens appear at the top of the screen, each showing a different receiver.  If you didn’t memorize the play when you picked it (as you should) you may be lost to where each receiver is.  The problem comes when you throw the ball.  As soon as your quarterback releases it, you take control of the receiver who is most likely off screen.  Any small movements will end with your player out of position.  More often than not, a pass ends in an interception.  Most of the time interceptions can be run back for a touchdown because the offensive line is tangled up with the defensive line.  I stick with the running game and it serves me just fine thank you.

If you’re just looking for an easy, fun time, do not turn reserves on.  If you want to sweat, panic, and fully strategize how best to use your players and which plays will keep your guys alive, then, by all means, use reserves.  With reserves, you have a limited number of players that can be used in certain positions.  Each death takes away a player so you’ll have to frequently swap if you want to sustain a full, semi-healthy roster.  After some mismanagement and cranking the death rate all the way to annihilation, I was left with no running backs and one receiver.  When that receiver was creamed into a few bloody chunks, the game was automatically forfeited due to lack of anyone being able to play.  The causal hilarity of hitting someone into a landmine becomes tactical thinking.  You’ll start to position your offense away from the edges of floating arenas and start weaving in-between lava craters as a way to shake off and potentially destroy defensive backs.  Having the reserve mode be an option is smart way to allow players to decide on play style on a game-to-game basis.  Tournament mode is where grit filled players will test there steel and see how far they can get before being unable to continue.  Personally, I enjoy one game at a time and something about playing multiple games in a row against the computer seemed like a waste of time in this day and age of online interactions.  The only real reason to play single player mode now is to get some more of the hilarious flavor the game has to offer.

The kitsch factor of the names never wears thin.  When your coach’s pre-game advice is “If you can’t say something nice about someone, kill them,” you are in for a treat.  Even the names are cheesy and great.  Whether its Coach McWhimple of the Sixty Whinners, the referee I.C. Nothing, or, my personal favorite, the Slaycity Slayers, you will be grinning from ear to ear throughout each game.  Spew McPuke of the Terminator Trolz just sacked Grim McSlam of the Midway Monsters.  I knew they should have run it with Bones Jackson.  Any combination of any name is hilarious and one of the reasons choosing different teams can be so rewarding.  But the main difference to play the field (WAKKA WAKKA) is for the variety of player types.

The diverse amount of players and their abilities makes each game a unique experience.  Trolls are strong but slow, robots fast but weak, Super-Humans have great stamina, skeletons are quick and can take a hit, and aliens are hard to tackle.  This may sound simplistic and in a sense it is, but individual match-ups decide games.  If a troll guarding and alien against a pass, the alien will most likely score.  A robot will have a hard time tackling a skeleton, and super-humans will do well against all races, but do not have a high potential to excel in any one area.  Teams can be either a variety of all types or a single type, such as the all skeleton Deathskin Razor.  It’ll take quite a few games to decide which style of play you like, or you can just pick based off names. 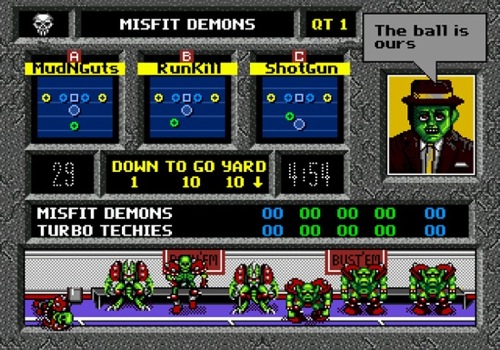 The sprites are cute not cuddly.  Monsterous spikes, scales, and bones cover every player.  Even the humans have eyes that glow with piercing light.  The fans when you score pop up and are a hilarious mix of rogues, beasts, and buxom babes (you have to admit, the 90’s new what was cool).  The inserts of coaches and players faces connect you a little closer to your teammates. Then the players die in such fun ways, like bleeding out, getting ripped apart, and turning into dust, that you can’t help but smile at their demise.  Slow down can occur because of all the action on the field, but nothing to serious or play ruining.

The music in the game rocks but is used so wisely that it elevates the action and heightens the game play.  The opening riff decimates your ears and readies you for the bloody battles ahead.  But when the actual games start, the music cuts out of for each play.  This shifts the focus to the groans, whistles and slams.  Some ponderous murmuring beat of is heard as you pick your offensive plays, and then rapped up by a tidy drum roll leading into the hike.  Music cues also highlight significant actions.  Keyboard clangs accompany explosions, a down tempo thud is softly slammed when you lose yards or are killed, and a shrill scale celebrates successful field goals.  The Sound design team has to be given much credit for my enjoyment of MLF because the sound and music kept me engaged throughout games, making my nice plays feel like triumphs and my insufficient ones seem like failure.

Mutant League Football may not be the pinnacle of football video games, but it does what games should do best; be fun!  Its entertaining nature hasn’t diminished over the years, and when you play MLF, your love for it will only appreciate in value in the games to come.

Mutant League Football scores a B+ with its humor, football game play calling, and unique style unable to be duplicated since. MLF only miss the extra point because of a frustrating passing game and sometimes boring single player experience.

(well, there is that hockey game too…)