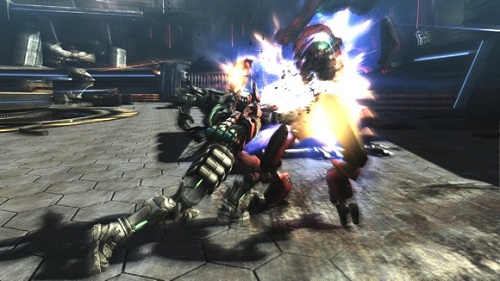 If you’re in the UK, or you do your ordering from our grim shores, you may have realised that only Amazon have the exclusive tri-weapon DLC pack for pre-orders. This effectively adds three entire weapons to the game and I don’t think there’s any other way of getting them. This pretty much means any other retailer is out of luck when it comes to Vanquish, as they’re simply the ones offering you the best value for your money. However, Play.com will be bundling both the 360/PS3 versions of Vanquish at pre-order with a copy of Platinum Games’ last smash hit Bayonetta, which even now is one of my favourite games of the year.

This is still a pretty tough sell, as unless a new way of getting those guns opens up this will be the only way of acquiring them, but I’m almost certain a double-pack of Bayonetta and Vanquish could be the greatest bundle of games short of The Orange Box. If there’s anyone who isn’t too interested in the extra weapons I’d strongly suggest trying to get one of those bonus Bayonettas. I don’t think anyone in the US has any interesting choices outside of Gamestop’s Tri-Weapon DLC, but just for fun; What would you choose if you could? Bayonetta or the DLC? Has the inferiority of the PS3 Bayonetta made your mind up already? or would you have gone for it even if it was just her voluptuous buttocks? Discuss.