I chose to play this today for two reasons. One; I’m still sick as a dog (So apologies if this is somewhat more meandering than usual). Two: Playing light gun games with a mouse is a nostalgic treat.

Virtua Cop of course originated in arcades, when anything made up of massive blocky polygons were considered ‘Virtua’. I used to play it as often as I could at a bowling alley close to where I lived as a child. This was so long ago in fact, that we either had to stack boxes on boxes for me to be able to point the gun at the screen or have my dad lift me up as I tried to shoot people.

I’m not sure how responsible that was as a parent, especially when part of the reason I loved to hit them was that people would burst in a bright colour based on who shot them whether it was the red gun or the blue gun. Yes, I said ‘red’, not ‘pink’. That’s the way parents trick you as a boy to play with a girl’s gun.

What’s kind of amazing is how much of the original set-up informed arcade games for decades to come. All the way up to Virtua Cop 3 or House of the Dead 4 I’m still firing my gun outside the window at every opportunity to always have a full clip. I still watch any window or door to watch out for an enemy ambush. I still shoot hostages in the face. While a lot of the original game doesn’t quite work as well as it should (It’s incredibly short, and killing enemies too fast can mean enemies will be trying to attack you before the camera has managed to find him yet), it laid down a formula that’d be aped for years to come. 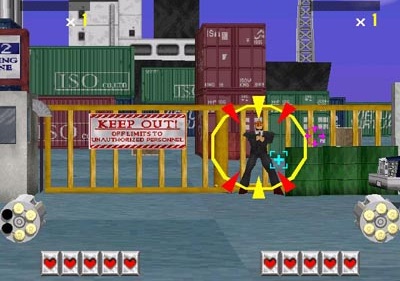 Collectively, I think we've shot this man more times than anyone else in gamedom. Poor sod.

Not everything would become a universal staple however. The collectible weapons hidden to be shot out of props would remain popular, but very few games outside of the Virtua Cop series (besides Ghost Squad) would allow you to play the levels of the game in any order you wished. This was fantastic for myself as a kid as I could try to play any of the levels I wanted to instead of having to go through each one and get entirely screwed by a particularly tough section.

As jut a game on its own though it’s still a really nice game to go back to. It’s obviously very simple in appearance these days, but I really like the bright blocky characters and extravagant hit flashes. The reticle is also incredibly simple to understand, identifying what your attack priorities ought to be and even now the rush of seeing exactly how little time you have to fire before they fire at you is still there.

Of course replicated on a mouse, it’s a little over powering, but it also allows for a lot more experimentation in taking out bad guys. Virtua Cop is over 15 years old now, but even so it has a really interesting scoring mechanic. Points are awarded for accuracy, and the game scores you differently depending on if you used three bullets to take someone out or scored a justice shot by blasting their weapon straight out of their hands. For reference, it only ever takes one bullet to kill an enemy, but you can get into a really fun rhythm with just the sounds of firing, hitting and reloading.

It was also nice to see again some of the bosses, who’re easily the worse part of the game. Kong, the first stage’s boss simply walks left to right on the top of a ship firing rockets down at you. The rockets however move so slowly that you would have no trouble at all taking them out of the air. What was really fun about this was that I’d knocked his life down to a slither and he surrendered, only for the threat reticle to appear as you pulled a gun out of his pocket. I had entirely forgotten that this happened, and for the first boss in one of the earliest 3D light gun games I can remember it’s actually pretty damn clever.

This is another one of those weird reviews where I don’t leave myself much to say. Virtua Cop is so damn iconic that pretty much everyone who ever went to an arcade in the 90’s (or a bad hotel/awesome bar in the 00’s) has played and enjoyed. It’s by no means something you should make a habit of replaying every so often because there is absolutely no variety in it, with none of the interesting bosses or rewards for saving hostages or stat tracking or bonus challenges that we’ve had since in both console and arcade versions alike. It’s just something that for fifteen minutes can make you feel like you’re seven years old again. It’s so bloody simple and unassuming that I can’t help but love it even in a weird mouse-controlled PC port. I wont ask you to play it again, just the next time you point a move controller or wii-mote towards your TV screen, maybe just spare a moment to think about how much fun it was to shoot mysterious polygonal men in shades.