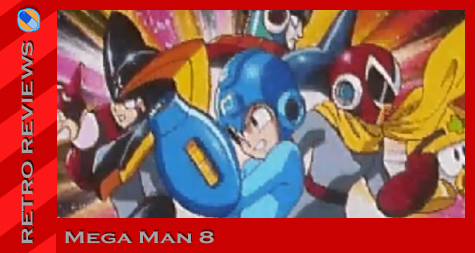 There are a lot of Sega-centric anniversaries colliding right now. The Sega CD is 15 years old. September and all its Dreamcasty glory just happened. A much less high-profile anniversary is upon us as well: The 15th Anniversary of Mega Man 8 for the Sega Saturn, aka “The game that saved Mega Man in North America”.

Okay, so technically that anniversary was several months ago and I am just now writing a review that I promised Josh I would write back when it was okay to still have your Christmas decorations up. All the same, in the spirit of anniversaries (Megaman is 25 this year, btw) and finishing what you start (don’t fire me, Josh), here is Megaman 8 for the Sega Saturn. 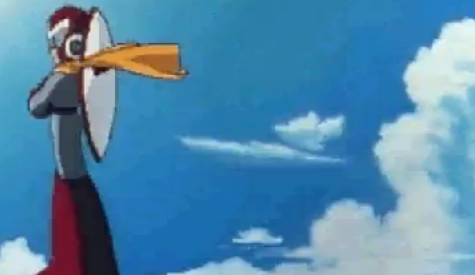 Sony of America did something pretty big back in the mid-1990s. They told their developers, both 1st and 3rd party, that 3D games were the thing of the future and that meant that the Playstation was only going to have 3D games. Pro Tip: Back in the day, polygon based games were called “3D.” The closest thing we had back in the day to stereoscopic whooziwhatsits was Nintendo’s Virtual Boy.

I know what you are thinking: Why in the hell would they do that? It was a different time, kids. The Playstation was built for polygons. The then-upcoming Ultra 64 had specs for handling polygons. Sprites and anything 2D was old hat. 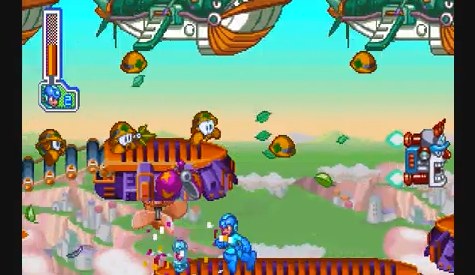 Sega, in a rare burst of Saturn era wisdom, made it clear that they were pro-2D. That probably had more to do with the way the Saturn was designed than anything else, but let’s give them some credit. Now, assuming you’re still reading, this brings us to Capcom and a little known franchise of theirs: Mega Man. Capcom, excited to ditch Nintendo for a few reasons, pitched Mega Man 8 to Sony of America. Sony of America took one look at that awesome, brightly colored 2D platformer and told Capcom to shove it. 2D was dead. Sega, on the other hand, rolled out the red carpet. This was the mid 90s, remember. Sega grabbing a series that had practically only been on Nintendo consoles was quite the feather in their gaming cap. 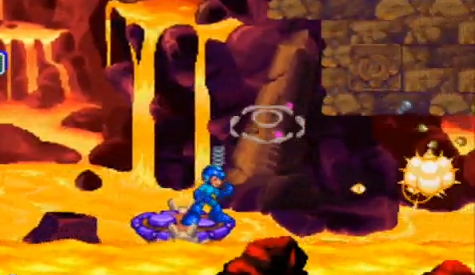 Sony of America eventually relented. The idea of letting a flagship series appear on their main competitor’s console (at the time these dealings were going on, the Nintendo 64 had just hit the market) was just too much. As a result, Mega Man maintained a presence on Sony consoles for the next decade. But forcing Sony to preserve the Blue Bomber was not the only thing that the Saturn did for Mega Man fans around the world. The Sega Saturn version of Mega Man 8 is the definitive version of the game. If you think you’ve played Mega Man 8 but have never held a 6 button controller in your greasy mitts, you are wrong.

It was more than just hubris that made Sony of America say ‘no’ to sprite based games. The Playstation literally CANNOT draw sprites. Look at the specs: The memory is not there. Almost every 2D game you played on the original Playstation was actually a polygon based game presented on one plane. Essentially, the Playstation would draw simple polygons and create “sprites” by taking 2D graphics and applying them as texture maps. If that sounds like a backwards way to do graphics, it is. Just look at Marvel Super Heroes vs Street Fighter for the Saturn and the Playstation. The Saturn is nearly arcade perfect, whereas the Playstation could not hold four characters and their moves in memory at the same time. 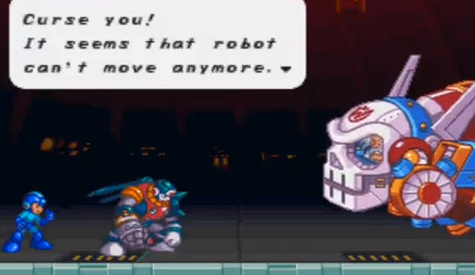 Spoiler Alert: Wily is in this game.

When it came time to develop Megaman 8, the Saturn version came out better: There are more enemies on screen at any given time and no slow down as the machine tries to crunch numbers. Additionally, there are two secret bosses in the Saturn version: Fan favorites Cutman (from Mega Man) and Woodman (from Mega Man 2). A battle with them includes a fluffy bit of conversation, a fun battle, some retro music, and a screw to add to your collection. On the Playstation? You just get the screw. Sadly, Mega Man 8 has been re-released and collected a few times on a few systems but in each instance it was the Playstation version of the game. Because of this, it’s a good bet that 90% of Mega Man fans have never played the definitive version of Mega Man 8. 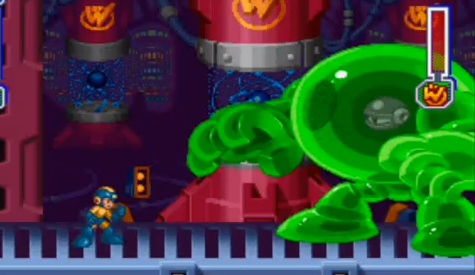 Beyond how awesome the Saturn was for Mega Man 8, Mega Man 8 for the Saturn was just plain awesome. Granted, the camp factor is high. If you need a laugh sometime, go to youtube and do a search for “Mega Man 8 voice acting”. Avoid drinking any beverages prior to watching as we here at Sega Addicts will not be held responsible for your choking to death. Yes, Dr. Light sounds like Elmer Fudd and Mega Man sounds like a seven year old girl with developmental issues. Maybe it’s nostalgia talking but there is something pure and fun about how 90s this game was in terms of the voice acting and the music. This game is the product of a time period where it was okay to make a game that did not take itself seriously. And maybe Capcom was paying their voice actors in sandwiches, I don’t know.

The gameplay is pure Mega Man. You run. You jump. You slide. You fight wacky robots and take their powers. Capcom added a few gimmicks and goodies here and there. For the first time ever, you can shoot your normal gun while a special weapon is selected. With the extra buttons on the Saturn controller, you can also scroll through your available powers without having to go into a menu, a nice treat from the Mega Man X series that (thankfully) jumped to the classic series in Mega Man 7 and stuck around for 8.

Your goal is to take this running and shooting into a series of levels where you spend your time killing small robots in anticipation of fighting a bigger robot. The power of the Sega Saturn meant that you spent your time doing this in brightly colored worlds full of depth. One of the joys of Mega Man 8 is the sheer amount of activity going on in the background. Clown Man (yes, that’s a thing) in particular resides in an extremely busy world where nothing on the screen seems to stop moving. 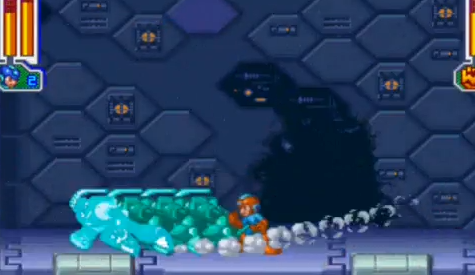 But what’s a Mega Man game without music? Sadly, Mega Man 8 kinda fails on this one. I have played through Mega Man 8 at least a dozen times and there is not a single song that I can hum off the top of my head. There is just something awkward about the music that makes it so that none of the songs is memorable. That’s not the say the music is BAD. Just not what fans wanted from a series that enjoyed some of the best video game music of all time in its earlier entries.

So take the good graphics, solid gameplay, total camp factor, and ‘meh’ music and what’s the final result? A pretty good Megaman game that has aged surprisingly well and is definitely worth your time. The phrase “They don’t make them like this anymore” is tossed out way too often but it’s applicable with Mega Man 8. Caught between the game design of the past and the disc based technology that was going to rule the future, Mega Man 8 got the best of both worlds with a dash of classic 90s era Capcom dubbing. Sadly, the superior Saturn version of the game is a little too hard to come by, but if you track down any of the many, many versions of this game based on the PSX code and find yourself liking this game a lot, shake the couch cushions and see if you can’t get the cash to put down on a Saturn copy. 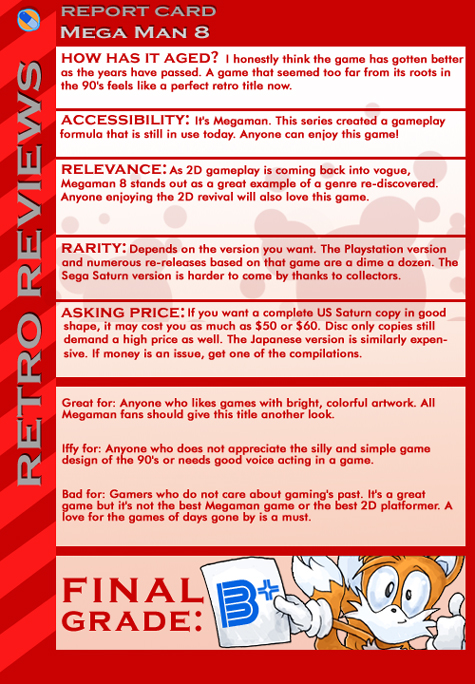