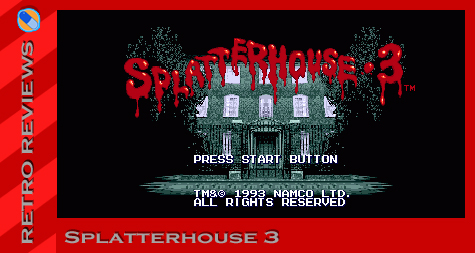 There is no better way to celebrate Halloween than with gory movies, a few pranks, rotting your teeth out with bowls of candy, and of course one of the most unnecessarily grotesque video games on the Sega Genesis: Splatterhouse 3. But does Splatterhouse 3 really live up to its name and its prequels? Will this intense battle be worth it to save your wife and son from “The Evil One?” Or is this just a Friday the 13th rip-off? Join me, fair reader, in a journey into a game with bloody violence rivaled only by that of Mortal Kombat’s fatalities.

Now available on: Xbox 360, PlayStation 3 (as an unlockable bonus in the more recent Splatterhouse release)

Reviewer Perspective: Old Timer – Someone who has played the game in the past, and is now returning again to see if the fire remains.

Splatterhouse 3’s story is simple. You play as Rick, a successful businessman who now owns a mansion with his family. Evil has suddenly taken over Rick’s mansion, captured his wife, Jennifer, and son, David, and it is up to you to help Rick in his mission to reunite his family and send evil back to the depths of Hell. To aid Rick in his battle, a mysterious mask (not to be confused with a common hockey goalie mask) has offered his assistance. Easy enough, right? Wrong. The Splatterhouse series has always prided itself on its intense difficulty and this game is no different. Fans will tell you, however, that the third installment is the easiest of the trilogy. I found myself cruising through some parts, but also having to repeat certain areas multiple times. But we’ll get to that later.

Blood now covers the walls of your once-lovely mansion. Every room smells of rotting corpses. Demons have infested your family, and you have nothing but your fists to stop them. Well, your firsts and maybe a hatchet, 2×4, cinder block, cleaver, and any other sharp object you may find lying around. Splatterhouse 3 does things a bit differently than some ’90s brawlers in a way that you really must master your limited set of moves and mobility to progress. The controls include three actions: punch, jump, and super form. This small set of options allows for exploration with combos ending with uppercuts and head butts. At first, it is easy to accidentally transform into your super form, (a buff, shirtless version of Rick) due to the fact that this option is assigned to the “A” button. Once you get used to the control scheme, you will soon be laying out punches and uppercuts to anyone in your way. The enemies sometimes have an unfair reach, which is where the tornado kick comes greatly in hand… or foot? To be completely honest, the tornado kick could determine whether or not you ever see the end credits of Splatterhouse 3, as it covers the 16-bit planes above and below you and provides brief invincibility. I would like to thank Mike Kyzivat for informing me of the correct button combo for the tornado kick, because it allowed me to finally progress in Splatterhouse 3 and indirectly complete this review.

Splatterhouse 3 is a grotesque game between enemies literally falling apart as you beat them, organs laying everywhere in general, and a nice coat of blood on just about everything else. Enemies will lose their faces, bleed pus, or lose body parts entirely as you dispose of them.  One enemy loses most of his face except for his bottom jaw and tongue, which then will stretch out to punch you in your own face. You can’t blame him for not being resourceful.

Newcomers to the brawler genre, and even veterans, may find Splatterhouse aggravatingly difficult at first. Enemies will frequently wait until the exact second you are beginning to recover from an attack to then attack you again, which happens often when surrounded. However, it is this level of difficulty that rewards one with great satisfaction after you clear a room of freaks out of the way. Enemies range from deformed clumps of organs and bulbous skinless humans, to floating sheets and vomiting “five-legged” dogs. The bosses are some of the more disturbing, especially a possessed teddy bear that still gives me nightmares or a two-legged worm who’s head explodes to emit nothing but maggots. The bosses can be some more imaginative creations, and also some of the easiest battles ironically. When you find that one open spot in the middle of their pattern, you are guaranteed victory by filling their “faces” with your fist. However, if you are unable to find that sweet spot then you may be forced to repeat entire levels for that 30-second boss fight.

Speaking of levels, Splatterhouse 3 has a different type of level setup compared to most brawlers. Taking place on different floors of a mansion, each time a door opens you are able to view a map on the Pause screen. You have little guidance other than a red “X” marking the boss room, and yellow doorways indicating warp doors or nearby weapons/items. For each level there is a timer, and when it reaches zero your wife or your child will submit to evil in some way, shape or form. This actually poses an interesting outcome, as the game has 4 different endings depending on who you rescue or don’t rescue. 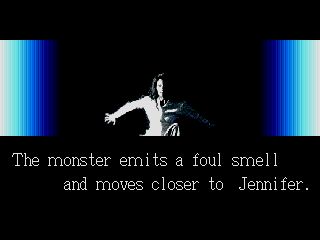 Splatterhouse 3 does an excellent job of squeezing the most out of a product, while being minimalist about it at the same time. The music does a good job of creating a rushed, but also deadly atmosphere during gameplay, with quick blips and 16-bit trills, while slowing down to a creepy murmur when it is time to decide which door to enter. The other side of minimalism takes part during the game’s cutscenes. A picture of Jennifer or David will show on the screen with nothing more than one or two sentences to describe the nightmare they are experiencing. This small visual aid helps the game in my opinion, as it allows the player’s imagination to run wild on what the monster or entire scene actually looks like. One of these pictures actually made itself known as an Internet meme sometime ago, and rightfully so. Though they are not the center of the game, the cutscenes and music do complete the disturbing package that is Splatterhouse 3.

Splatterhouse 3 lives up to its name more than any iteration of the series due to the fact that blood, organs, and absolutely anything else is literally splattered throughout the entire house composing the game. The game will not strike fear in anyone’s heart over the age of 8, but still has that charming horror feel that everyone enjoys around Halloween. The only thing preventing this game from a perfect score would be the steep unfair difficulty at times. That being said, Splatterhouse 3 belongs in anyone’s horror marathon or leisure game time for a nice gory way to celebrate Halloween. 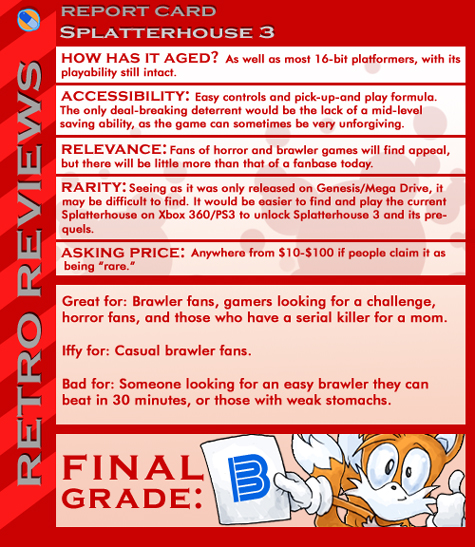