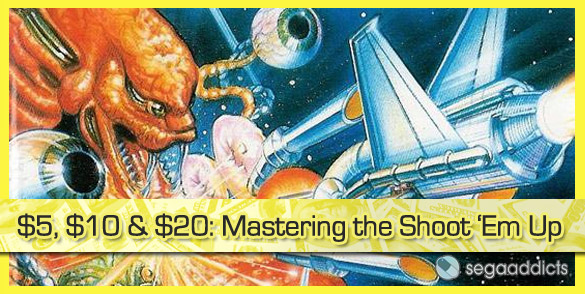 This month, I’ll be highlighting a set of scrolling shooters that appeared on the Sega Master System. The genre goes by many names: shoot ‘em ups, shmups, shootie doodads – but they all boil down to one thing, flying around and shooting a bunch of enemies who approach you in patterned waves.

So hit the jump to read about an early top down shooter for the system, an amazing arcade port and one of the first games to ever be called a cute ‘em up! 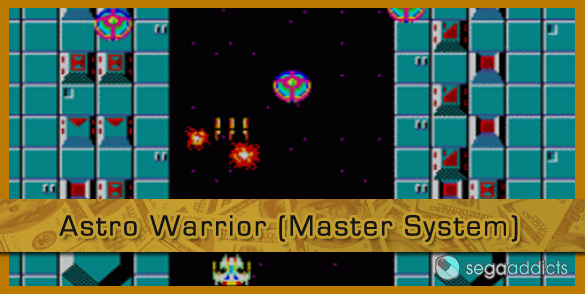 Astro Warrior is an early vertical shooter for the Sega Master System and it shows. While not a terrible game by any means, it is somewhat derivative. You take control of your typical videogame space ship and fly through space themed levels, shooting down enemies and collecting upgrades for your ship.

Now, being derivative isn’t necessarily a bad thing, and the above paragraph could describe a lot of great shooters. Astro Warriors best gimmick is the upgrading structure where you can end up with two extra ships that follow and shoot with you. Plus, the action and boss fights are quite good for a game from 1986.

The downsides are that the game doesn’t ever really stand out for itself, which is probably why it’s mostly forgotten today. The levels are generic black space with the occasional colored grids floating beneath you and there’s only three levels total, making this a very short game for skilled players. They do try and extend that short game length by making the game loop endlessly to build up your score, but that’s not really the most exciting way to spend hours with a game.

Should you buy it?: This is a very cheap game to get so if you’re at least a modest fan of the, it’s probably worth the price. Plus, while you can buy the game standalone, there is also a combo cartridge for the same price (and sometimes cheaper) that includes Hang-On. This version does remove the looping levels after you beat the game but that’s okay because you’ll quickly move onto Hang-On anyway. 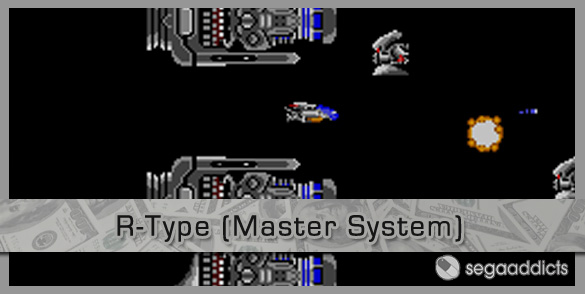 Off all the games featured in this article, R-Type is the most influential and iconic. It’s also the only series that is still somewhat active with R-Type Final released in 2004 and a couple releases in the R-Type Tactics series a few years ago on PSP.

So, what is R-Type and how is it on the Master System? Well, when initially released in the arcades in 1987, R-Type did a lot to separate itself from the usual sci-fi inspired shooters of its day. For one, gone was the mechanical, futuristic aesthetic of most typical shooters replaced with a bio-mechanical look that was obviously inspired by HR Giger’s iconic artwork.

Next, Irem changed things up and made the levels just as much of a threat as the enemies you meet throughout the games. Instead of worrying about not running into enemies and their projectiles, now you were navigating through cramped corridors with dead ends, multiple paths and more. The game definitely took multiple playthroughs just to figure out and memorize the best path to take.

Another key element of R-Type was the attack options and upgrade system. By just quickly tapping the attack button, you’d shoot a quick weak projectile, but you could also hold the button to charge up and release a much more powerful attack. Plus, there were many upgrades to collect, with the most iconic one being “The Force” which gave you a pod to manage that can help protect your ship or tag along and fire extra projectiles.

Should you buy it?: Yes. It’s not that expensive and you’ll be able to play one of the best games in the Master System’s library. It’s definitely not a walk in the park with the game requiring multiple playthroughs so you can learn and understand each level’s unique playstyle, but it’s worth it in the end to witness some amazing level designs and boss fights from the late 80’s. 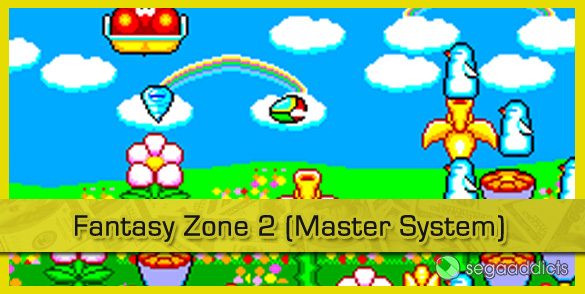 Sega fans should recognize Fantasy Zone and its main character, Opa-Opa, as the series pops up regularly with mentions and cameos in current Sega games, even though we haven’t seen an actual new Fantasy Zone game for nearly 20 years. The reason is obvious; the Fantasy Zone games are some of the brightest, cutest and most colorful games you’ll ever play, and Sega somehow made a spaceship with legs and wings one of the most adorable game characters of all-time.

The Fantasy Zone games change up the standard shooter formula by giving the player a little more freedom to move around in. Instead of scrolling levels, Fantasy Zone 1 & 2 let the player explore multi-area levels, tracking down large enemies and destroying them all to finally be taken to a boss before moving on to the next level. In addition, another unique element of the series is the ability to gather money and buy upgrades and items for Opa-Opa, which give the shooter an RPG quality that was rarely seen in the genre, especially in the 1980’s.

While the original Fantasy Zone first appeared in the arcades and was then ported to the Master System, Fantasy Zone 2 is unique as it was built from the ground up as an original Master System title. The game doesn’t stray too far from the original’s gameplay, although the visuals are improved slightly, but the new levels and bosses are more than enough to justify this sequel.

Should you buy it?: Of course, with the only stipulation being if you’re able and willing to spend $25 on the game. The Fantasy Zone series should be experienced by all Sega fans and Fantasy Zone 2 is the best it ever got on the Master System. There aren’t many games like it in the entire shooter genre, and whenever you hear the label “cute ‘em up” shouted out to describe a game, you can bet there’s some Fantasy Zone influence somewhere in there.

All I want for Christmas is the Dreamcast 2: Part 2