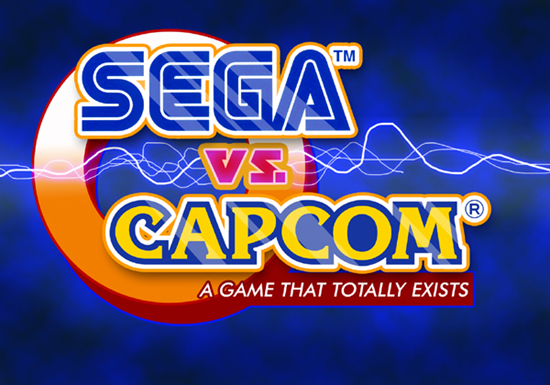 As a resident Sega Addict and avid 2D fighting game enthusiast, it’s been my ongoing desire and obsession that Sega and Capcom team up to create a “Sega vs. Capcom” fighting game, a la their famous “Capcom vs…” franchise.

Naysayers will say nay, because that’s what naysayers say. They’ll say that 2D fighting games are toast. They’ll say that’s a dumb idea because everybody only wants God of War knockoffs nowadays. They’ll say Tom Kyzivat is stupid and that he smells like musty furniture. Well, little known to all those naysayers, we here at Sega Addicts happen to have our own time machine. Yeah. It’s kind of a big deal. So, I thought I would use said time machine to travel into the future to see if my dream would ever become a reality.

So, what did I find upon timing myself (that’s what we call it) into the nifty future? I found Sega vs. Capcom, SUCKA! Are you naysayers still saying nay? Well, listen to these reviews I clipped from magazines of the future (or, as they’re called, “space-o-zines”):

“Sega vs. Capcom has single-handedly brought back 2D fighters, in a big space way!”

And how ‘bout this one?

“Sega vs. Capcom is everything that Tom Kyzivat had hoped it would be!”

“Sega vs. Capcom is definitely a game that exists, here in the future!”

“Tom Kyzivat is awesome and handsome and awesome.”

Well, c’mon, guys, that’s more opinion than news, but I appreciate the gesture. Um, anyway, to further prove to those sayers of nay that this game totally super double exists, I decided to bring the game back with me.

Now, keep in mind, video games in the future, or “technological recreational space diversions”, as they’re known, are not produced in a suitable format to garner playability in any medium we have today. Long story short: we would need a nuclear reactor to play it. So, since I couldn’t bring back the game itself, I smuggled the instruction manual! Ergo, in an ongoing feature, I will scan in the playable Sega character pages to give you a taste of the majesty that is Sega vs. Capcom!

Now, you might say, “Tom, aren’t you just drawing these characters yourself as a blatant means of feeding your unhealthy obsession with this hopeless idea?” Well, to that I would say… um… look at the pretty picture! Go look! Look at it! 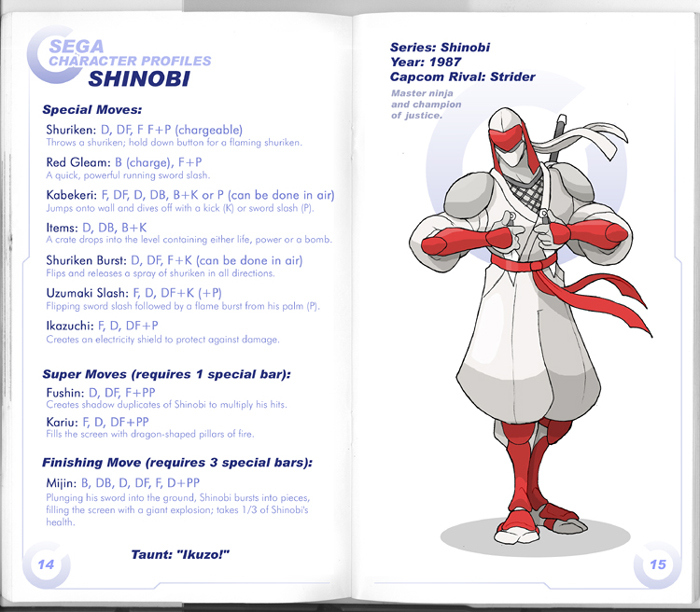 The first character in our feature, Shinobi, is a man who needs no introduction. So I’m not giving you one.