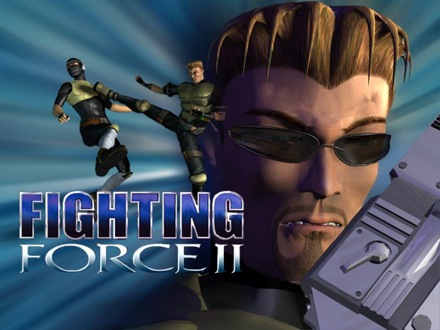 I can’t say I’ve gotten very far in Fighting Force 2 developed by Core Design and published by Eidos, but it’s not really my fault.  If they wanted me to play the game to completion, they should have made it fun.

Story: Cloning exists but is illegal.  An evil corporation is suspected of cloning.  Mercenary Hawk Mason is the only man who can stop them.  Thrilling story.  The real headline here is the main character’s name: Hawk Mason.  You have to admire the sheer balls it takes to name your main character Hawk Mason, especially when it’s totally serious and sincere.

Weapon use is spotty at best.  You’ll pick up a weapon, sort of aim at an enemy and unload a few rounds in their general direction.  Zooming into first person for precision shooting work well, but it is pretty clunky and rather slow.  The variety of weapons may convince you that you’re doing unique things throughout, but its all shadows and fog.  Whether it’s grenades, pistol, or min-gun, you’re just blowing stuff up.  You can holster your weapon to go back to hand-to-hand combat or use melee weapons like an axe or crowbar, which is equally unreliable in harming foes.  Sliding is hilarious because your hulking hero glides across the ground like a baseball player stealing second.  But just imagine if Tomb Raider was harder to control in every aspect.  That pretty much sums up Fighting Force 2. 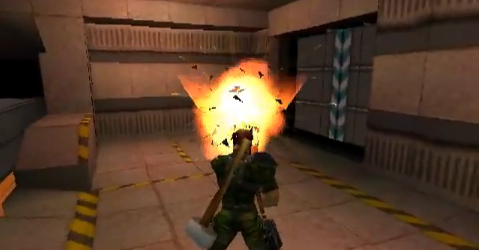 The few environments I saw blended into each other like how sugar disappears into coffee.  You’ll be wandering through many grey warehouses.  You know the level design is boring when an office space is a breath of fresh air.  Most objects in the game are destructible.  Punching pop machines until they exploded was my main source of amusement, unfortunately.  Another fun note; pop cans fly out of the pop machines when you hit them.  It’s the details that really count.

Enemies are rather scarce throughout the game.  You’ll end up looking for them as something to do rather than being scared of them or trying to avoid them.   Standard goons mix with goblin goons, their artificial intelligence added together amounting to a box a Nabisco Cheese Its (yum).  Some of the boss fights are seemingly fun because they look so different from other enemies, but they are mostly beaten up in the same way; punches, kicks, guns, and exploding barrels.  Can I just write repetition after every paragraph? It will save me so much time.  I did like one monstrous boss because it had a second, useless head, much like a stillborn twin being absorbed by a healthier wombmate.  But guess how you beat it? Barrels.  And guess what color it was? Grey.  Not even a hideous monster can break the monochrome monopoly. 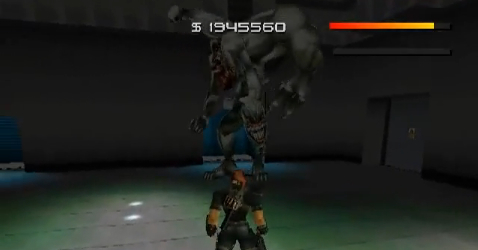 This game is dreadful Please don’t make me play this game anymore.  Please.  I’m being more genuine than when Jack tells Miles he loves his fiancée after getting caught banging an overweight waitress in the ass in Sideways.  And he was pretty damn genuine.  If I post a picture of me begging on my knees will you forgive me for this short article? 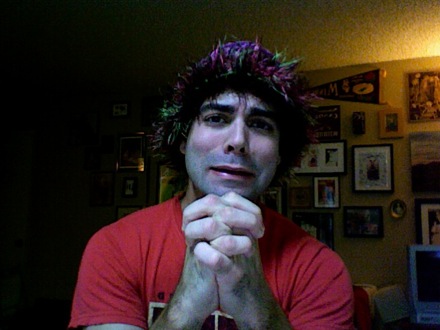 I didn’t warn you about the hat my Grandma made me.  I’m assuming all is forgiven because of that.

Rumor: More Dreamcast and Sega Saturn re-releases on their way