Since its release in 1999 for the Sega Dreamcast, the original Hydro Thunder and I have spent a lot of time together. There’s something about the Dreamcast and its huge library of multiplayer games that makes it my go to system whenever friends or family come around. Hydro Thunder is often the first game I reach for when the occasion arises.  Not only is it a game that’s fairly easy for anyone to play, but it also provides an exciting and intense experience that only the dying breed of arcade racers can provide. When I heard that Microsoft Game Studios was producing a sequel for XBLA, I was instantly excited. I felt a little skepticism due to a new developer being in charge of the series (unfortunately, Midway is no longer with us), but watching the trailers and viewing the screenshots always settled my stomach.

Now, after many years of waiting, Hydro Thunder Hurricane will be released this week on XBLA for 1200 MS Point. I can confidently say that no fan should be disappointed. The game is Hydro Thunder as we remember it. 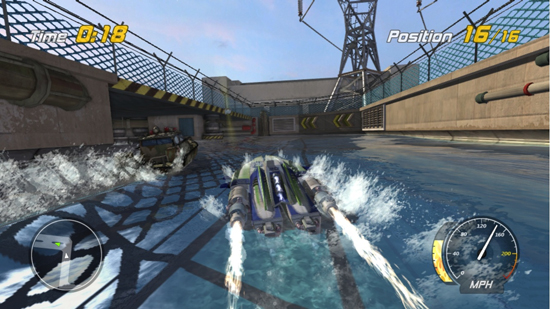 In the gameplay department, Hydro Thunder Hurricane stays incredibly true to the original formula. You race a speedboat through detailed and awe-inspiring environments while grabbing boost power-ups and avoid hitting the plethora of obstacles in your way. It’s not a technical racer by any means, with skilled players able to play entire races without letting off the gas and holding the boost button the majority of the time. The excitement often comes from learning the tracks and their many shortcuts while constantly avoiding everything in your path.

A welcome addition to the gameplay is the ability to modify the tracks by grabbing little power-ups that look like a switch. These switches do a variety of things, for example, raising up a new ramp that allows racers to get to a secret area, opening or closing a gate, or even creating more waves for the racers behind you. All the tracks already have a variety of secret areas and shortcuts and the switch power-ups add even more to their replayability.

In fact, while we’re on the subject of the tracks, Vector Unit has done a remarkable job of recreating what made the original game so endearing. The game has a total of eight tracks, and while some are better than others, they all have a unique look and impressive events that happen throughout the race. You’ll see creatures swimming around underneath the water that occasionally jump out and splash you and giant gods that tower above the boats and attack. There’s even a moment that I won’t spoil in the Area 51 track that managed to put a smile on my face. Some of the challenge of the game is in just keeping your eyes on the track in front of you rather than letting them explore what’s going on elsewhere. 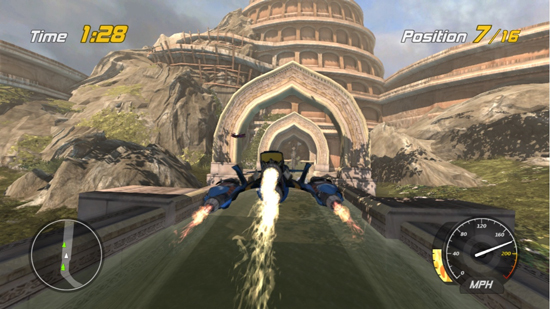 Vector Unit has also given players a lot more to do than in the previous title. The single player experience involves races, ring challenges, gauntlets, and championships. Ring challenges involve racing alone on a track while navigating your boat through a series of rings while gauntlets are the opposite and have explosive barrels placed around the track that need to be avoided. Championships are a set of 3-4 rounds that include a mixture of the three previous modes, and you compete for points against computer opponents. Although none of the modes are near as fun as the races, they add a little variety for those looking for something else. The ring challenges in particular can almost serve as a guide for the tracks, as they’ll often take you through unknown shortcuts and secrets that could end up helping you during races.

When you start the game you’ll only have a small percentage of the tracks, boats, and modes available to you. Further items are unlocked by increasing your “credits” in the game. Similar to Sonic & Sega All-Stars Racing, where just playing the game gains you points, Hurricane allows you to gain credits by playing any mode you want. The only requirement is you place in the top 3 positions. It doesn’t matter if you’re playing a single player race or challenge or an online or offline multiplayer game, as long as you’re 1st, 2nd, or 3rd, those credits are yours. You can choose to just play the first track over and over again to gain your credits if you want, although, I don’t recommend it. It’s not too tedious a process either as all the tracks and boats can be easily unlocked in a matter of hours. 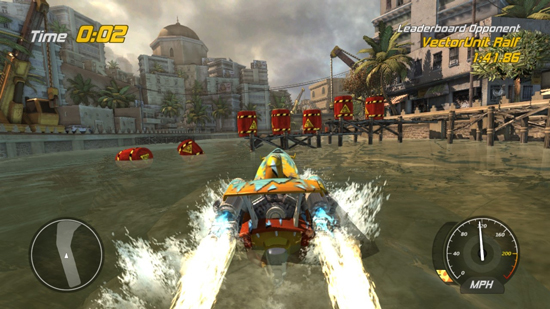 Hydro Thunder Hurricane does so much right that the few flaws it has are incredibly minimal and hardly detract from the game. The most notable one is the occasional lack of signposting during certain track areas. It doesn’t happen often, but when playing a track for the first couple times or in split screen mode you can occasionally get lost trying to figure out where to go. There’s often just so much going on in the environments that the flow of the course is not always clear.

Also, everything in the game can be unlocked fairly quickly and left me wanting more. This is an XBLA game, and thus I find it hard to really complain when you’re paying a fraction of what a retail release would cost, but the 8 tracks included can all be played through in about 30 minutes. They’re all so good too that you wonder what other ideas Vector Unit could have put to use.

Hydro Thunder Hurricane is an amazing HD follow up to the 1999 original. Fans familiar with the series will feel right at home and newcomers will find it easy to pick up and instantly start playing. The game looks gorgeous on the 360 and other modern additions like online play and impressive water physics help bring the Hydro Thunder series into the current generation. If you have any interest in arcade racers at all, I recommend you check this game out.

Hydro Thunder Hurricane gets an A.