It seems like reviewers are spending the whole first paragraph of their Ivy the Kiwi? review talking about Yuji Naka. The man is a legend, but seeing as you’re on our site I’ll just assume you know who he is. That being said, his new game Ivy the Kiwi? is fantastic.

A little bird named Ivy is lost in the jungle all alone. After learning she may be a kiwi bird and that kiwis are great runners, Ivy takes off into the wild unknown to find her lost mother. Ivy never stops running so it’s up to you as the jungle or some elemental spirit god or something to help her. Like Pac Man 2 or Kirby: Canvas Curse, you don’t actually control Ivy but simply guide her as a third party. Using the stylus, the player draws vines in Ivy’s path to build bridges and toss or fling her toward the goal. Along her way, she picks up 10 hidden feathers in each level that she believes to be her mother’s.

Once you have the basic mechanics down, the game doesn’t evolve much. After my first sit down with the title, I thought it would get old pretty quickly but then I looked at the clock and realized I’d been playing for three hours. The challenging level designs keep the gameplay fresh for all 100 levels. I found most of it to be pretty easy but sometimes the level map will load and make you say, “What the HELL?” With such a cute aesthetic, Ivy the Kiwi? gets deceptively difficult, like when your 3-year-old sister punches you in the junk. But even the most frustrating levels didn’t take more than a few tries. 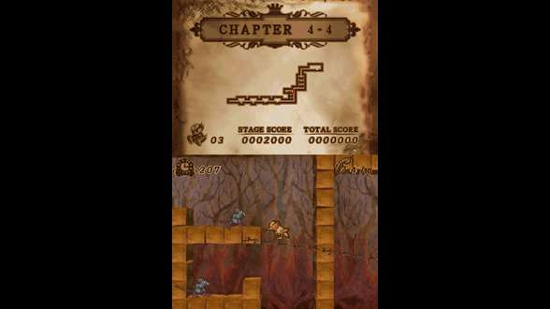 The stylus controls feel natural and precise but you will find yourself drawing lines in the wrong places or accidentally grabbing onto others as Ivy barrels onward and forces the screen to move. The vines can be a little buggy too. Pretty frequently I’d have Ivy flying through the vines when squished between two of them.

The heartwarming storybook plot is reflected with the games adorable, cartoon-y presentation. It actually works as a great motivator. If you flick the stylus wrong and send this tiny, helpless little bird careening into a bed of spikes, you feel AWFUL. It’s a really strong method of keeping you focused. The graphics perfectly emulates a classic fairytale picture book but the environments could be more colorful. A lot of the green and brown earth tones can blend the foreground with the background and confuse the player, especially on the DS’s small screen. 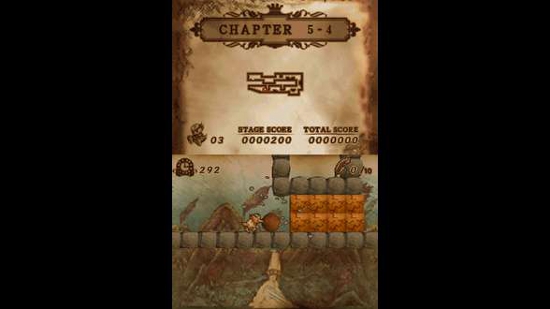 While the main campaign’s 50 levels move by very quickly, there is a lot of replay value. Completing the main game unlocks a bonus campaign with as many missions as the regular playthrough. 100%-ers will want to go back to collect all the feathers strewn about in each level and the multiplayer mode will make sure you keep Ivy’s cartridge with you when around friends.

Ivy the Kiwi?’s pedigree combined with the unique aesthetic, fresh feeling gameplay and cheap price point make it a must buy for me. It’s a little difficult to find, being from such a small developer. I had to order my copy from Amazon after waiting nearly a week for Gamestop to get a copy. It’s only 20 bucks, though so run out and get it as quick as you can.

B+ Buy it! Unique graphics and gameplay, cheap price and infinitely replayable. 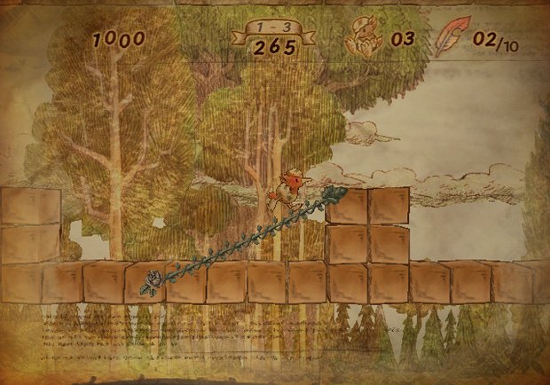 Ivy the Kiwi? is Prope at what they do best: take a simple gameplay mechanic, i.e. drawing vines to guide the main character, and build an incredibly polished game off of the idea. Games like Let’s Tap, Let’s Catch, and Just Half (iPhone) all have a similar appeal with Prope focusing on all aspects of the game (sound, visuals, and gameplay) to create something that ends up being far better than you expected.

Ivy the Kiwi? is no different and it may be my favorite Prope game so far.

The most misleading thing about Ivy the Kiwi? is it’s children’s storybook aesthetic. This game goes back to game design of yore where trial and error is the special of the day and you’ll be replaying some levels over and over again until you get the perfect run. Matt seems to have had an easier time than I did and that could be because he’s just better at videogames, the DS controls are a little more precise, or a combination of the two. For the most part the Wiimote works extremely well but there’s just no substitute for using the stylus to draw things. Would you rather write your name on a piece of paper in front of you or attach a pencil to a 10-foot pole and sign a paper across the room? 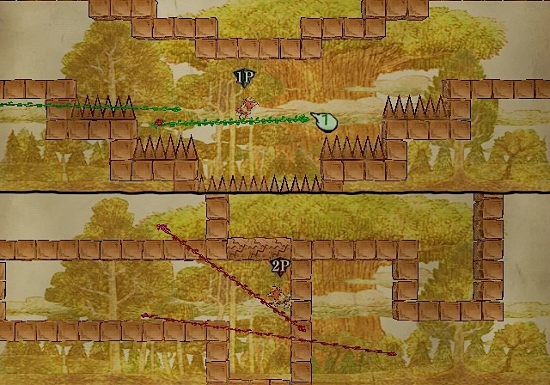 Speaking of the comparisons between the Wii version and DS, the Wii includes some multiplayer modes not found on the DS but the rest of the game is identical. The game does look incredibly gorgeous with its hand drawn aesthetic on a big TV screen but that doesn’t mean the DS isn’t quite the looker either. There are WiiWare and DSiWare versions of the game as well but they only include half of the levels and no bonus modes so I highly recommend just shelling out the extra cash for the physical copies if you’re interested. They’re pretty cheap to begin with so it’s not going to break the bank.

Although the music and art direction of Ivy the Kiwi? is impressive its the gameplay that keeps you engaged. As you progress through the levels you’ll notice that guiding Ivy becomes extremely natural as you create paths, bounce, and launch her through the many challenges. There’s something very tactile about the way everything feels and even though the DS might have a more precise control system, the large motions you’ll be making with the Wiimote cannot be replicated on the DS. 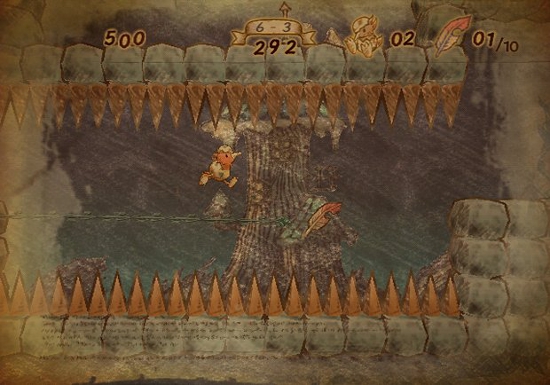 As good as Ivy the Kiwi? looks and plays I was a little disappointed by the variety of challenges and enemies you encounter. About halfway through the game you’ll have seen everything the game has to offer and it basically just ramps up the difficulty from there. With only a few enemies types and the same basic blocks making up the main level design the game can start to look a little monotonous. Yes, the storybook look is great but when the background art is the only thing that really changes from level to level it starts to wear thin.

Overall, Ivy the Kiwi? is a great example of motion control gaming done right. Where many developers just convert a button press to a certain waggle with the Wiimote, Prope has made a game that can only be done on the Wii or DS. At it’s budget price Ivy the Kiwi? packs in a lot of gameplay and I recommend it to anyone interested in seeing what the creator of Sonic the Hedgehog is up to these days. I have a feeling Prope is only just getting started and we’ll be seeing some amazing stuff from them in the future.