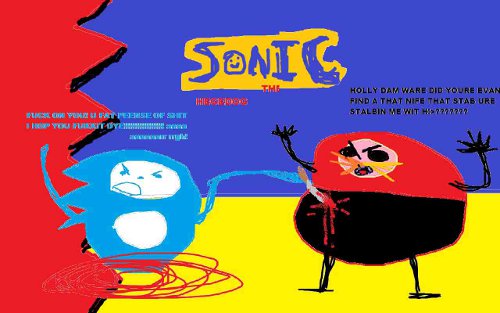 I can’t think of anything to fill up the intro with this week (like all weeks) so I’ll just let you get into it. Hit the jump to find out what we’ve been playing, because you’re obviously so interested.

Stevie Grant- Writer of Top 10 Worst and Reviews of Games I Haven’t Played:
Well Epic Mickey came out here on Friday so i’ve been playing that. I really like it. Obviously you’ll get more out of it if you’re an animation buff but I definitely recommend it. The story is really good too. Other than that, not much. I stopped playing Zuma Blitz because I realized I’ll never succeed in my quest to be any good at it. Oh I also replayed a bit of Sonic Colours with a friend on challenge mode. Challenge mode btw is just the whole game but a game over means no continuing. I don’t see the point of it, personally.

Alex Barbatsis- Writer of Retro Reviews and Freaky Fridays:
I bought Donkey Kong Country Returns and have played exactly two levels. No comment yet. I also played eat a lot of food and party hop. I won.

Brett Hatfield- Community Manager and writer of Megadriving:
Since I took the PS3 to the beach with me, along with the HDTV, I mainly played a bit of everything important on it. Tekken 6 got a nice bit of play as I went on a screencapping raid. BlazBlue, as usual lately, got some as well. Finally got past the BULLSHIT mission on Chapter 6 of Resonance of Fate (the final boss of that mission is the dirt worst), so now I’m trying to level Leanne back up. Add in Madden, NCAA, and Smackdown 2010, and that about sums it up.

And now, allow me to sum up future weeks in advance: GRAN TURISMO 5.

Matthew Jay- Writer of 10 Things That Aren’t Sonic and Radvertisements:
Finally finished Ys: the Oath in Felghana for review and had some time for recreational gaming. And BOY have I been gaming. I’ve also been taking advantage of Black Friday sales. I picked up 999 and Professor Layton for DS. Expect a 999 review up at Xugo Gaming sometime soon. Gamestop had Fallout New Vegas on sale for 40 bucks and I’m 5 or 6 hours into that. Damn that’s a big game. I think they really missed an opportunity by not getting some kind of promotional tie in with the band Fallout Boy. Maybe for Fallout 4. Finished 999 and got the ‘axe’ ending. Finished Silent Hill 2 and got the ‘Leave’ ending. Goddamn multiple ending games.

For me this week isn’t about games that I’ve played, it’s about games that I have that I’m going to play sometime eventually. So one that’s been sitting around since like August is Condemned. I’m really interested by it and I hope the horror aspects of it are as good as people say they are. The next is Eternal Sonata, which has nothing to do with Sega, so I’ll be quick here. Basically I’m just really interested about the story of the game. Basically it takes place in the composer Frédéric Chopin’s dreams while he’s on his deathbed. Usually in narratives dreams are a cheap way out of having to flesh out a plausible story (SPOILERS: think Super Mario Bro’s 2), but I feel like there’s a good chance this game isn’t going to do that because of how explicit it’s being about the fact that it’s in a dream.

Finally, I bought a game so great that it deserves it’s own paragraph. A game so incredible that it will change the way we think about one of our favourite characters. A game that I’ve hyped up so much that now it can’t possibly live up to the expectations you have: SONIC THE HEDGEHOG (2006)! Obviously this is going to be for a future Not-So Classic Games article. I have big plans for it too, just you guys wait. But yeah, I haven’t actually played any games this week.

Andrew Galbraith writer of Contemporary Alternatives and Miscoded Confidence:
Having been sucked into World of Warcraft prior to the launch of Cataclysm next month in addition to having almost zero free time for the past four weeks has done wonders for my social life. Seriously — if I haven’t been working or attending to a slew of family events, I’ve been trying to clock an hour or so here or there in Azeroth, which even I’ll admit is disgustingly pathetic. Sadly, just about all other play has been on hold as the IT job continually gets in the way of actually writing anything, but as I say each week — that’ll hopefully change for the better really soon. Keep it real, addicts.

Alexander Sargeant- Writer of Retro Reviews:
Okay, I’m probably done being ill now. Jesus, it really wasn’t fun. Sadly no Sega games this week, although I am replaying Policenauts for a Retro Review which actually was released on the Saturn, but for pragmatic reasons I’ll be using the PSX version. Also tucking away at Valkyria Chronicles II, but then I will be doing that past christmas without a doubt. It’s looooooong.

Castlevania: Lords of Shadow was the major game this week. It’s bad, but also incredible, and then sometimes a chore, before finally being a fascinating mess. Such a -weird- game, and I’d love to contrast it with the simplicity of Vanquish and Splatterhouse sometime soon. It was great seeing classic Castlevania staples reimagined in serious detail, but they took out a lot of the original’s charm and replaced it with really generic bollocks. I don’t know why action adventure games have shimmying in them. I don’t shimmy in real life, and it’s not the same reason I don’t beat up monsters in real life. I could shimmy anytime I want. I don’t shimmy, because NO ONE HAS EVER ENJOYED DOING SO.

The story is also all over the place, but it does have an incredible set up for a sequel. I just hope it plays like an entirely different game. Castlevania, for instance.

I also replayed Bayonetta a little because I watched a cut-scene online and remembered just how incredible that game is in almost every way. Announce the damn sequel already!

Tom Kyzivat- Artist and Podcast Co-host:
I still didn’t have time to play anything this week, and what’s worse, I don’t have anything “clever” to say about it. Dang.

Alex Riggen- Editor in Chief and Podcast Host:
I have been playing Splatterhouse on the 360. I went into it expecting the worst and was pleasantly surprised that it does not suck. It’s also surprisingly faithful to the original series and doesn’t completely feel like a God of War ripoff with some franchises name pasted on it. It doesn’t do anything new in terms of gameplay but I think fans of the original games will be pleased. Except for the last level which is incredibly frustrating.

Kris Knigge- Reviewer and Podcast Co-host:
Much like Alex, I will be starting Splatterhouse this evening. I have reasonable hopes for it. I also played some Vampire Savior this week, since I’m really rusty.

Well that was grand! I liked the bit where Brett played Tekken. Surprising! Are you surprised by Brett playing a game he talks about every god-damn week? Well why don’t you tell me in the comments? In fact why don’t you surprise me by telling me what you’ve played? The best comment gets a prize! (Disclaimer: You will not get a prize)

Well that’s it for this week. I’m gonna go back to yelling at homeless people. See you next week for another instalment of this thing or whatever!