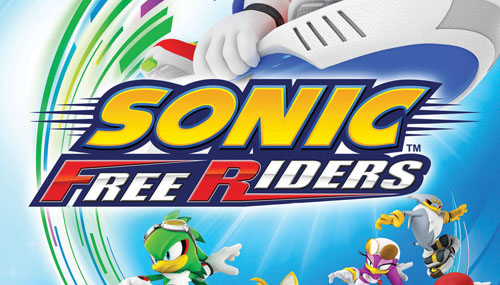 The Xbox 360 is officially five years old and with no sign of Microsoft’s successor to the console it’s apparent that this generation is going to be different. Usually at the five year mark we’re hearing rumors and announcements about what each of the hardware manufacturers have planned for the next generation. Games are announced for the consoles of the future and game development starts to slow down on the current systems. This does not seem to be the case for any of the big three manufacturers though and both the release of the Microsoft Kinect and the Playstation Move seem to reflect Microsoft and Sony’s plans for the future. Rather than develop and launch an entirely new console, they’re building upon the current generation possibly with plans to continue on for another five years before they’re next major release.

While the PlayStation Move is an attempt by Sony to follow in the Wii’s footsteps with improved technology, the Kinect is a slightly different beast. By mapping the player’s movements and skeleton, Microsoft has attempted to create a new way to play games without any form of controller at all. It’s certainly an impressive idea and the technology behind it is something you’d expect to see in science fiction films but if it’s truly a worthwhile to play games is something that will need to be proven. Developers can release as many mini game collections as they want but until there’s a “Halo” or “Gears of War” on the system it’s going to remain a niche console for families and casual gamers rather than something that’s truly desirable for everyone.

Sonic Free Riders is SEGA’s attempt to cash in on the excitement for Microsoft’s new hardware. At first, I was a little confused why SEGA would want to release a new game in the Sonic Riders franchise but it did eventually make sense. For a game that would need to rely entirely on player movement for control, the act of leaning to steer should work. It’s especially more realistic and intuitive than other Kinect racing games that have you air mimicking a steering wheel. If SEGA could get the control down right then Sonic Free Riders could become the best game in the series. Unfortunately, it’s not quite as intuitive as one would hope. 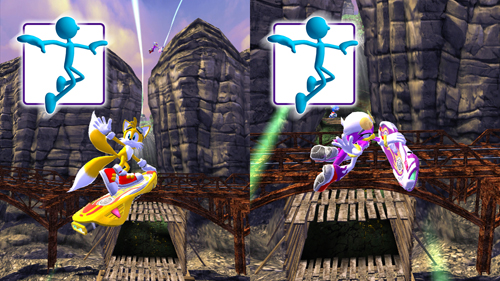 I will give Sonic Free Riders one bonus. I’ve never truly felt so exhausted after playing a game as I did after playing this for a couple hours. Screw Wii Fit. If you want to get a slight workout from playing videogames the Kinect is definitely the way to go. There’s a good chance the game won’t entirely recognize what you’re trying to do but I’ve never had to repeatedly jump in the air and spin around in any other game.

By the way, do not play this game with anyone in the room with you whom you respect or are trying to attract. Any amount of sex appeal or intelligence you appear to have will cease to exist the minute you are seen crouching and then proceeding to jump in the air and trying to do a 360. I’m just starting to be able to look myself in the mirror again. 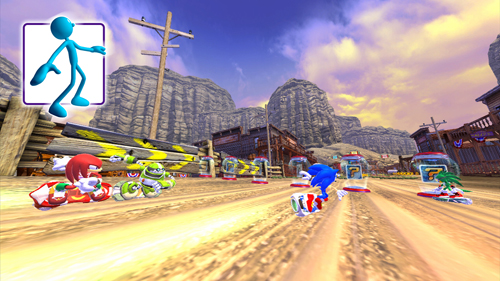 Graphically, Sonic Free Riders is a little bland. I suppose it’s the best looking game in the series, but when the last two games are on PS2 and Wii that isn’t very impressive. The models are sharp looking enough, but there’s a huge lack of detail or anything of interest in the majority of the levels and environments.

It doesn’t help that the majority of the tracks are uninspired and you’ll find yourself racing through the generic ice, fire, subway, etc. type levels. There are a couple moments of unique ideas but not enough to truly stand out. It’s saying something when I can’t think of one moment worth mentioning as I write this review. 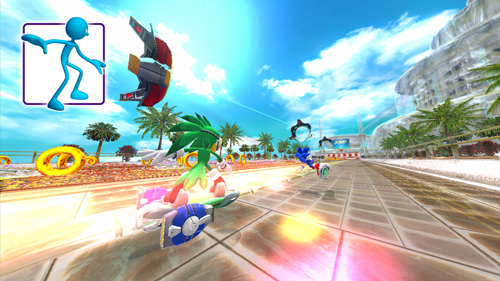 I could forgive the lack of creativity and visual flair if the game controlled well but getting your onscreen character to do what you’re doing can be rather difficult. You turn by leaning back and forth but knowing just how much to lean can be cumbersome and I never was able to get around some of the tighter corners without hitting random walls. Then there’s the act of jumping off of ramps which takes some getting used to. There’s an obvious delay to your action and the action on screen so you often actually have to jump before you get to the ramp so the timing syncs up. Eventually, you start to get used to the delay but it never feels as responsive as it should.

There’s also powerups you can obtain and each one has a different movement that correlates to using that powerup. Again it can be confusing what the game is wanting you to do sometimes and I’d find myself having to fake throw a football or roll a bowling ball several times before the input worked. This made powerups clumsy and awkward to use as it was hard to use them at the exact moment you wanted. 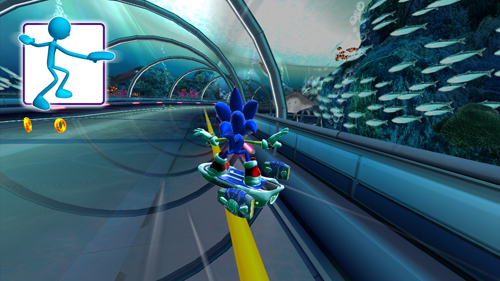 There were a few other control gimmicks like reaching out to grab rings and grinding that suffered from similar issues of not responding on time or not working entirely but they were small problems within the grand scheme of things. When you’re having problems just steering, the fact that you can’t grab rings is kind of a side note. I will say that the act of boosting by kicking your leg forward worked quite well and I rarely had problems of that not responding. So, if you looking for a good “leg kicking to propel yourself forward” simulator this would be the game to get.

It’s unfortunate that the control is so poor in Sonic Free Riders because overall the game has a lot of content and it really stands out from the other games on the market for Kinect right now. If this would have been a typical 360 game with controller support it would have been worth a look from fans of the earlier games but when compared to other kart racers like SEGA All-Stars Racing and Mario Kart it doesn’t really hold up. It’s a little too generic and uninspired to be worth the $60 price tag. 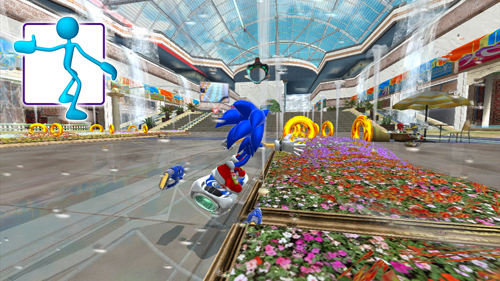 Overall, Sonic Free Riders is a game that has very little going for it. If the motion control would have worked it would be easy to look past the generic overall design of the game but it’s hard to recommend this to anyone but the extreme Sonic fan who’s looking for some Kinect action.

Sonic Free Riders gets a C-.

Genesis titles can now be played from your keychain

Sega will not be attending Gamescom 2010