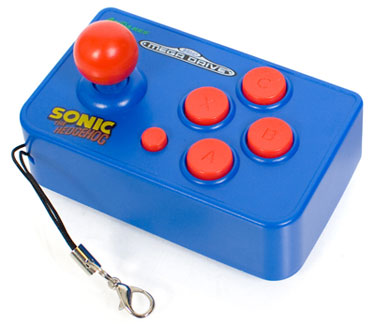 Sega Genesis games can be played on various consoles such as the Saturn, PSP, PS2, PS3, Xbox, Xbox 360, Gamecube, Wii, and PC. Now gamers can add their key chains to that list. The Sega Arcade Nano is a miniature keychain console that can plug into televisions.  There are currently two keychains available.  The Sonic Arcade Collection includes Sonic the Hedgehog, Sonic 2, Sonic Spinball, Sonic 3D Blast, and Alex Kidd in the Enchanted Castle. The Virtua Fighter 2 Collection consists of its namesake, Shinobi, Golden Axe, Golden Axe 3, and Alienstorm. The keychains are now available for pre-order from Firebox for £12.99.

I love the concept but am uncertain how it will feel to hold such a tiny controller.  Is the Sega Arcade Nano Keychain something you would consider or are you fully saturated with Genesis compilations?

Want some release dates for those Vintage Collections?

Poll Results: What is the best Alex Kidd game?