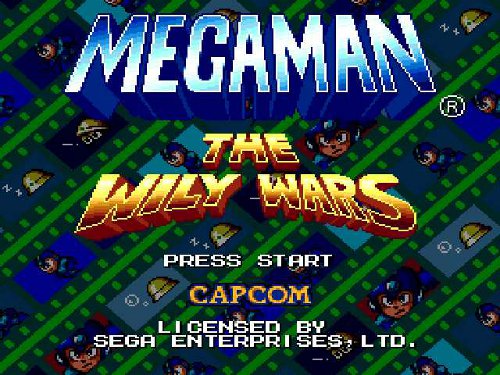 Hello and welcome to Boss Attack! That’s right this section is back with a vengeance to showcase the best, worst and weirdest bosses I can find from Sega’s classic gaming period. Today’s game is also the first in a multi-part feature, where I will talk about the bosses of each game featured on the Wily Wars compilation game.

And yes, this is just a round about excuse to talk about an NES game series on a Sega blog. Who cares? Not you! So hit the jump to read about the tantalizing and fearful bosses from the Mega Drive remake of Megaman 1!

First of all, since you can choose Megaman bosses in any order, I’m just going to talk about them in the order that I beat them in. Ready? OK let’s start with Bomb Man. Bomb Man looks like a sort of chicken robot in this remake. And honestly I don’t know why. In the NES game he just has a mohawk, but since Wily Wars all official art (and that cheesy Megaman fan film) has depicted him as a chicken robot laying bomb eggs. In the this remake I actually find him harder. That’s another weird thing about Wily Wars, some of the bosses are harder, while others are made substantially easier. Either way, all you have to do is shoot him while he parades around you. Easy. 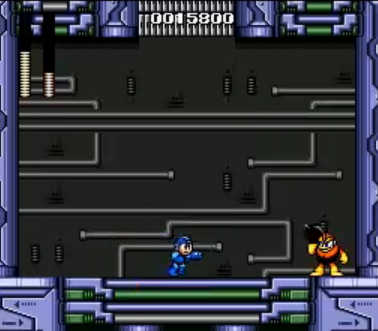 The next foe is Guts Man whose name I never really understood. What is ‘guts’ supposed to imply? That’s he’s brave? Personally I think ‘Construction Man’ or even ‘Derp Man’ would have worked better. Actually, ‘Derp Man’ actually works for this incarnation of him as he actually doesn’t move. Just throwing bombs at him for a couple of seconds and he’s dead. Pretty easy although I doubt I’d be saying that if I didn’t have the correct weapon to beat him with. And really how are you supposed to know? I guess, guessing is the way forward in these games. 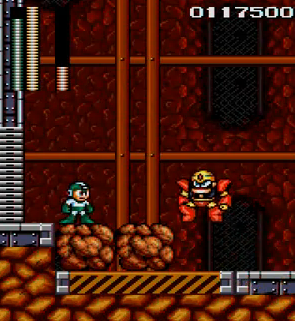 The next robot master up is Cut Man who has a giant pair of scissors on his head. Now that truly is a sad fate. Kind of reminds me of Edward Scissorhands but with giant scissors on his head. Now that would be a fucking awesome sequel. Cut Man himself is quite cute and it’s no surprise that he’s a man favourite. I mean who doesn’t like fighting spandex wearing robots with sharp instruments grafted to their head? 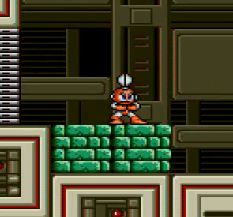 Enough about the sad, twisted fate of Cut Man though as now it’s time to talk about my favourite robot master from this game. Elec Man. Elec Man set the standard for electricity focused robot masters in this franchise and that’s understandable because he looks awesome. Wearing a mask almost representative of a super villain, he just looks fun and cool. It doesn’t hurt that the weapon you get from him is also the best in the entire game. His music is also the best in the whole game. Even in the Wily Wars in which the music is uncomfortably different, his theme always sounds great. 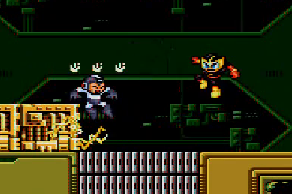 Our next boss is Kenny from South Park. Well he is, but he wears blue instead and throws ice at you. Ice Man is definitely one of the weirdest robot masters in Megaman history as he doesn’t even look like a robot. More of an Inuit. Not much to say sadly. You defeat him with Elec Man’s weapon and move on.

And now we come to our last robot master of this game. Fire Man, who boasts a giant chimney head and the power of flame. He’s also one of the hardest bosses in this game to beat without his weapon. His stage is a great representation of him and he’s also a favourite of mine. Nothing much to say about Fire Man though so I’ll move onto the robots and contraptions that reside in Wilys castle. 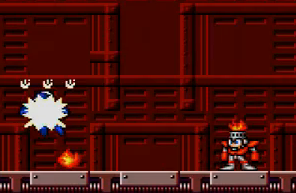 And so we make our way to Wily castle. And probably the most famous non-robot master in Megaman history. The dreaded yellow devil. I fucking hate this guy, I can’t even beat him in the NES version without cheating, he was however toned down for The Wily Wars which gave me great pleasure. I can finally beat the fucker. Over highlights of Wilys castle include a clone of yourself and a weird computer stuck in a bubble. Yeah it’s kind of odd. The clone fight is cool though, if a little messy and frantic. 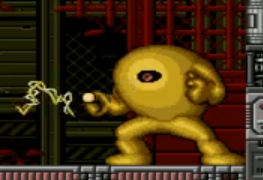 And here we are at the final boss. Well not before you fight all the robot masters again. This would become a staple of the Megaman games, but at least you can blast through em with their respective weaknesses. After that you get Wilys machine. Another staple that appears again in all the following sequels. He’s kind of a bitch in this game though. I noticed that his attacks were fairly easier to dodge in this Mega Drive port. So you eventually beat him and save the day! glad that evil Dr. Wily is sorted out and we’ll never hear from him again ever. 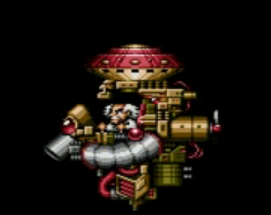 Except that we do hear from him again! And next week we’ll be taking a look at possibly his best and most creative robot masters so far. So join me again then fellow Sega Addicts as we will explore part 2 of The Wily Wars: Megaman 2!