Hello and welcome to the finale of this mini-series, where I take a look at every single boss in Megaman: The Wily Wars. Yes it has been an exhausting journey, filled with danger and frustration but we have finally made it to the final section. That’s right once you have beaten the main three remakes you unlock a completely new set of levels with all new bosses!

So hit the jump and we’ll take a final look at the bosses of Megaman: The Wily Wars. The finishing line is so close I can taste it.

So these new sets of levels are essentially a whole new game of Megaman called Wily Tower. However it is very short, but you do get to select any weapon from the first three games to use before a stage which is the best thing ever. Seriously when I found this out I couldn’t wait to equip Metal Blade and a few other favourites to fuck shit up. The only problem with this though is that each weapon is more effective at killing one of the new bosses than the rest, so you might have to do stages a couple of times so you can figure out the right one. But enough babbling, let’s start with the first boss I selected, Mega Water S.

Yeah these bosses have lame names. Whatever. So Mega Water S is a water based robot who throws harpoons at you. He runs around on a big floating platform occasionally throwing stuff at you if you dare come up to his level. He is quite easy though since I just stood at the side of the room below the platform throwing bombs and Ice man’s weapon at him. So just be careful standing at the side and you’re fine. He looks kind of stupid though. Don’t know why but he just seems like the kind of robot that would be a moron. As far as difficulty goes he is pretty standard though. Too bad this doesn’t last as the other new robot masters are considerably harder. Don’t believe me? Well then let’s talk about Hyper Storm H. 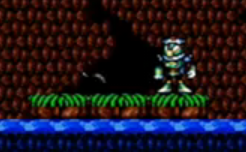 Hyper Storm H is actually a giant pig. Seriously he looks like something that would come out of the Megaman X series. His animation is also really good. His sprites look like something out of another game completely. He is also massive and has two health bars. Yeah he is the only robot in classic Megaman history to have two health bars. His attacks however are less intimidating than he is on his own. He just stands at one side of the room and tries to suck you up. Sometimes he’ll jump around and make enemies fall down on you but that’s very rare. Just use Crash man’s bombs and you’re all good. He’s actually kind of easy! So remind me why I said he was hard again? Maybe I was just thinking of the next one who is a complete dick. What’s that ones stupid name? Buster Rod G of course!

An interesting fact about these bosses is that they are supposed to be based off the old Chinese fable Journey to the West. That technically makes this boss the protagonist of that story, the monkey king. Well he is a monkey I guess so that fits. So Buster Rod G has a giant pole (I don’t know the correct term for this weapon cause I is stupid) that can reach nearly across the whole screen. He can also deflect your bullets which can be very annoying. The only way to really get him is to wait until he jumps over you, and use Gemini man’s weapon on you. That or you just keep using bombs on him and hope it works (it will). So after that intense fight what happens? He runs away with one point of health left. For a robot based on the legend of a monkey king he sure is a wimp.

So there you have it! You have defeated Wily’s new stupidly named robots and get to conquer the area’s which this mode is named after. That’s right it’s time to scale Wily’s tower and all the bosses that reside in it.

The first boss here is a fire based robot who is of course defeated by the ice weapon acquired in the first game. What makes this fight really fun though is that you have two poles you can use to bounce up to him. You’ll need these to get to this weak spot when he stops flying around the stage. He’s also a different type of Megaman boss as you have to use the stage to beat him, as well as figuring out which weapon works best. So yeah, this boss is a treat. The next boss however is not. 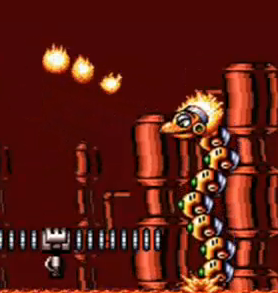 Yeah this boss is just a giant bouncy ball. He sometimes opens up and reveals his face but for the most part he is just a bouncy ball. Real imaginative. In terms of attack he sometimes grows spikes and fires Gemini man’s laser at you. You can defeat him easily with Elec man’s weapon though, so fortunately you need not spend lots of time with this irritating robot.

This next boss however is the funest (is ‘funest’ a word? Derp.) boss in Megaman history. It’s our friend from earlier who ran away but this time the fight plays completely differently. This battles takes place on a series of falling platforms where you are constantly trying to get to a higher platform, while fighting him. You can end the fight pretty quickly with Hard man’s weapon though. Funny since it’s the same character you would have thought he’d be weak to the same things. Either way it’s a really fun fight and makes up for that really lame bouncing ball boss. Oh and he dies this time. Hooray for that! 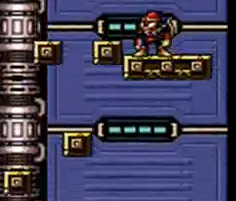 So here we are. This is the end. The final boss of The Wily Wars. Is it an epic end to a wonderful (well I guess that’s debatable) series? Lucky for you, it is. Wily is in a giant robot made of three smaller boss fights.  That’s the lower body, the upper body and finally Wily’s saucer. The lower body walks towards you while blocks ascend from the ground. You just jump on these and use Elec man’s weapon and you’re good. Oh he also fire missiles at you making this super hard, the cretin. 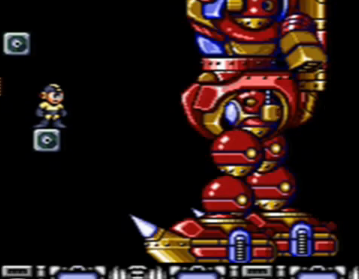 The lower body is slightly easier as he at least doesn’t fire stuff at you. He instead has fists with a platform at the top and spikes at the bottom. You have to jump on the tops of his hands and then keep firing directly in his face. Using Crash bombs will make this boss toast if you manage to get onto the fists. After that it’s finally time to face Wily in his flying saucer. Well the robots head is still connected to it, but I guess it counts as it looks like that thing you see Wily fly around in, always. He, in this part is actually quite easy. He just drops bombs at you slowly, but if you still have enough of Elec man’s weapon you can completely make him your bitch. Either way it’s finished. And as you chase Wily though the credits you get a roll call of the past robot masters from all of The Wily Wars. A fitting end. 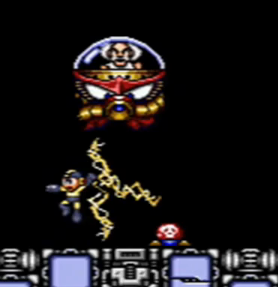 So that was Wily tower. It had some lame bosses, weird names and some super fun fights. A perfect cast of bosses to end this Mega Drive remake. And that was also the end of this mini-series! We’ve covered all the bosses of this game and now it’s time for you to play this great game and decide for yourself who is the best. I hope you enjoyed it and I’ll see you soon for something less Megaman-y. God knows I’ve written about this game too much over the last weeks. But in the end, it was all worth to kick Wily’s arse. Even though we’ve seen him in every classic Megaman game since. Will he ever learn? No. No he will not.

Things that are: Megaman in Sonic Generations