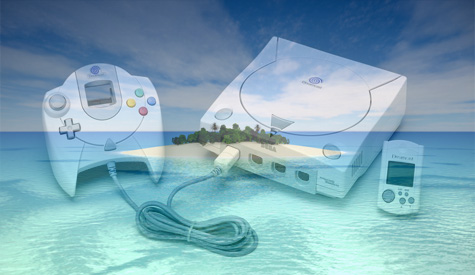 It’s time for another Sega Addicts Speak! How exciting!

This week’s question: You’re stranded on a desert island with electricity and a TV because some desert islands have that. You rub a coconut and a genie that looks like a giant talking hot dog oozes out. He says that he can give you a Dreamcast and three games of your choice to play for the many years you are stranded on this island. What games do you pick?

John Doherty: Well my first game is an easy choice. One of my favorite games ever Chu Chu Rocket would be an easy pick. Not only do I love this game to death, but it has a ton of replay value as well. My next choice would have to be Phantasy Star Online. Another amazing game with a ton of replay ability. However I would also need to ask the Genie to host a server for it with a lot of people, that way I could get the full experience. My third and final game would probably be Ikaruga. I suck at this game and have always wanted to get better. Having a ton of time on an island would give me the opportunity to improve my skills.

Sven Wohl: House of the Dead 2 would be the first game I would take with me to the Island. Because frustration needs some kind of outlet, right? Next would be Phantasy Star Online, because it’s replayable and awesome! Last game… Soul Calibur! I think that is the one game I played the most so far on my Dreamcast, so that’s a definite pick! I would not pick Skies of Arcadia simply because that game is too hard for me as it seems, since I tried to beat the game three times now and wasn’t able to…

Alexander Sargeant: Phantasy Star Online is the obvious choice and there’s no way I couldn’t include it. Such a great game, and I’d love a chance to play it again with modern-day Sega fans. I’m sure we could rig up some kind of private server between our various desert islands somehow. The genie seems to like the Dreamcast too so he’d probably be cool with it.

The other two are much trickier. I definitely need a fighting game in there, and so clearly that has to be Garou. There are so many fighters on the Dreamcast that it’s just ridiculous to try and choose between them all, but Garou is the only one I don’t need anything beyond a simple 1 vs 1 option to enjoy. It’s a game that makes me love fighting people. Lastly I should pick Ikaruga.because it’s a fantastic game and given an infinite amount of free-time I would like to think that maybe, just maybe.. I might actually get good at it.

Alex Riggen: I’d have to go with Shenmue for my first choice. I would hope the sense of a living world and NPC’s who actually go about their daily lives would make me feel less lonely. Plus, there’s quite a bit to do in the game besides just the main quest. I would make it my goal to go in every single building at least once and pick up and set down every object I could find.

Next, I would bring Phantasy Star Online. Having a loot based RPG with random elements would be extremely important as it would take quite awhile to become too repetitive. Plus, I believe I have close to 100 hours on my main character before my save file got corrupted and I felt I’d barely even got that deep into the game.

Last, I’d have to bring NBA2K1. I still occasional go back and play a few seasons of a franchise and still enjoy every minute of it. I don’t consider myself to be much of sports fan and still only play the 2K games when I do. There’s just something addictive and perfect about the gameplay. I can also spend hours in the character creator and make some imaginary friends while I’m on the desert island.

Josh Newey: This is no easy question to answer. That’s probably why I put the thing off all week. Only three games for my single favorite system, nay, THING, of all time? Good lord. I’ve deleted and rewritten this entire thing three times over now. Let’s see if I can get it right this time.

First off, I’d have to go with something with a limitless amount of replay value. That game might have to be Power Stone 2. There are few games on the Dreamcast that bring me more fond, fuzzy memories. I much prefer the more focused one-on-one battles of the first game, but I can’t ignore just how the insane weapons, environments and characters of the sequel just drive the replayability of this game through the roof.

After that, I’d probably go for Jet Grind Radio. I absolutely adore the series, and while I’m sure the music would eventually start to grate on my nerves, the style and relentlessly upbeat attitude of the game is essential to keeping my sanity intact while the crabs are nipping at my toes and the slow starvation is spurring violent hallucinations. Cel shaded graphics are sure to steer those visions into a positive direction.

I’m really going to be aching for some form of expansive, sweeping adventure on this island, so I will probably go with Skies of Arcadia for my last game. I am ashamed to admit that I have never played more than ten minutes of this apparently classic Dreamcast title. I imagine that endless hours on a deserted island may finally afford me that opportunity. It absolutely kills me that Shenmue is not included here, but the mere fact that I’ve played through the game twice over just makes me wonder if an eternity spent with it would eventually burn me out on one of my top three favorite games of all time. Oh well.

Tom Kyzivat: That’s a tough one, but I’d have to say Power Stone 2, not only because it’s the best game ever, but because it’s the best game ever. Marvel vs Capcom 2 would be a solid choice, because life wouldn’t be fun if you couldn’t get extremely pissed off now and again (only assuming the genie would be willing to play with me, because that game’s not all that fun with only one player). Lastly… I guess I’ll say Sonic Adventure 2, because I already have two fighting games, and a 3D platformer with lots of room to replay levels and dick aound with Chaos woul be a good idea if I was stranded for the rest of my life. Also, I would want Pumpkin Hill’s phat beats to keep me company.