So, if you’ve been a long time fan of the site, then you know my feelings on Daytona USA. In fact, my very first article for this site was a little editorial and retrospective on the entire series. It is honestly one of my favorite racers and arcade games of all time, really only trailing behind Gran Turismo and Ridge Racer.

So when I saw the not-so-subtle reveal trailer for the game a couple weeks ago, I was ecstatic at finally getting the opportunity to play it again, and potentially getting a great home port, after being stuck with mediocre ones for years. Was it worth the wait? Find out after the jump. 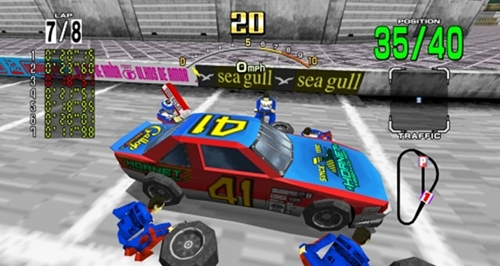 Now, starting with the graphics. If you’re expecting this to look as good as Gran Turismo or even as good as Sega Rally, then I think you’re gonna be sorely disappointed. The models are pretty much the same as the original arcade versions, but textures have been updated and look better than ever, and it easily looks better than the Dreamcast port of the game from 2001.

Sound-wise, everything’s the same as you should know and love. You get the choice of arranged or arcade music, as well as the option to use custom soundtracks if for some reason hearing “ROLLLLLLLIIIIIIIING STAAAAAAAAAAART” all the time starts to get grating. It all sounds fine, but most of the time the radio chatter gets drowned out by the music and car sounds, which to be honest can be a little distracting in a weird way sometimes. 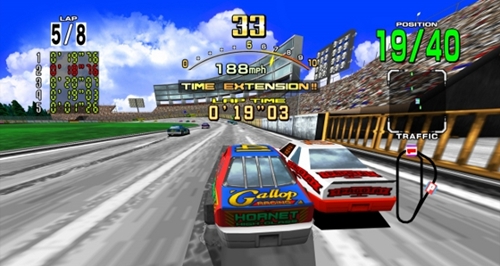 As far as the gameplay goes, this is EASILY the best this game has ever been on a home console, putting the Saturn and Dreamcast ports to shame. While it’s not absolutely arcade perfect, at least with a controller (as I don’t own a wheel, I couldn’t tell you how that feels.), it still feels close enough to make me happy.

The amount of additional modes is pretty fantastic too, especially compared to Sega Rally Arcade. Karaoke Mode is good for practicing both your driving line and memorizing the lyrics to the music, neither of which should be too hard. Survival mode is incredibly fun, putting a new twist to the checkpoint system and making sure the “TIME EXTENSION!!!” sound clip will haunt your dreams. And of course there’s the old standbys like Time Attack and Challenge modes. 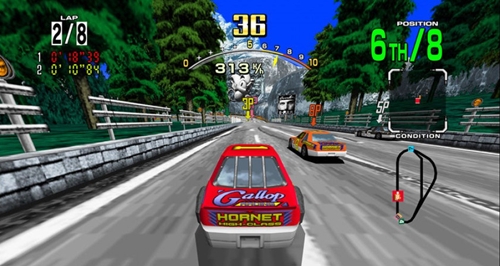 All of this is great, but the one major issue I have with this game is that it’s all done too quickly. Within 12 hours I had all the trophies unlocked, times and scores uploaded on each scoreboard, and half of the challenges done. In that sense, you might get the sense of not feeling you got your money’s worth.

But all in all, Daytona USA is an absolute joy, as it should be. It’s almost kinda sad to say that when it comes to stock car racing games released in 2011, the best one, by miles, is one that’s nearly 20 years old. It’s the best you’re gonna get on a home console when it comes to this game, as well. If you’re a fan of the series, or a racing fan in general, you honestly have no excuse, other than lack of funds, not to pick this up.

Check out this infographic on Sega's arcade racing history