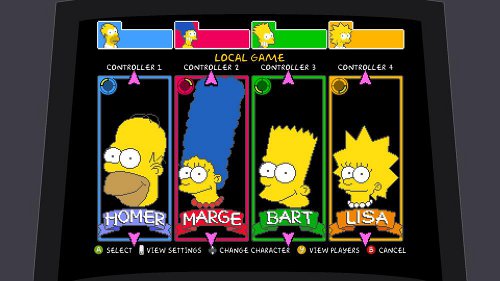 It’s hard to doubt that the beat ’em up genre is at least important to the retro scene and early videogame history as a whole. And while the genre has stopped being relevant it has in many ways made a come back into the download market in the last few years. With this come back we have seen a lot of retro revivals and inspirations including many early 90’s cartoon property arcade games such as the X Men and The Simpsons.

The Simpsons Arcade Game was a game that I thought would never be released to home consoles. As a kid I used to play it regularly on one faithful holiday. Ever since that I have had fond memories of The Simpsons Arcade Game but never thought to see or play it ever again. Step in BackBone Entertainment, an experienced company whose resume contains many Sega classics and retro brawler ports. But does this game still hold up, and should you actually care? Hit the jump to read the full review.

I’ll start this off by stating that The Simpsons Arcade Game is a weird game. Even for The Simpsons it manages to be weird with off kilter imagery and dated references to very early Simpsons iconography. This is part of why this game is a trip in every sense of the word. The old references provide an odd sense of nostalgia but are served up with a bizarre twisted logic. You get to the Moe’s tavern stage via a grave yard for example, and Krusty the Clown makes his appearance as a giant boss balloon that takes up 90% of the screen. And when it’s not making references to episodes lost in recent memory it’s throwing in new references and boss characters that I’ve never even seen before. Somehow all these weird references and dated character designs help the game in a modern context. It’s set in an old Simpsons world but with weird visuals that give off a familiarised yet unconventional feel. It’s pretty awesome to say the least. The gameplay itself is your standard beat em up fare with a few tweaks. You can punch and use your characters specific weapon to your advantage to charge your way through hoards of mindless goons. However what set this game apart at the time was the team up system in which two players could join and perform powerful attacks which help a lot in the more crowded stages. This is a fun additional feature, but it’s really not that important. However were you really looking for innovation from a 20 year old game port? 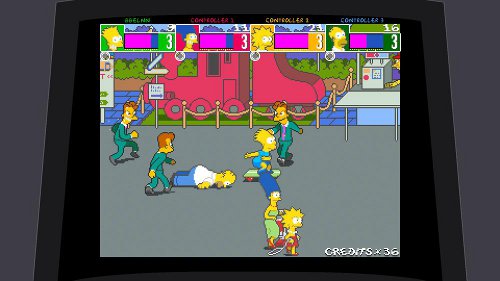 The only new thing about this game is the online which works perfectly fine. Even when the action got pretty hectic everything managed to flow nicely and I didn’t notice any slowdown if there was any. I can not say this for my co-op partners however as they seemed to experience massive glitches when online. Although I personally didn’t see or feel any of these I thought it was worth mentioning in case your internet wasn’t the fastest.

Backbone as always comes through with some neat extras as you can unlock various artwork and song pieces with each character you complete the game with. My only real problem with this is that unless you really dig the game it’s hard to play through the same stages 4 times for only mildly interesting content. To be frankly honest there isn’t really much I can say. It’s a top notch port of a classic arcade game with no real problems. The price point is high though so you might want to wait until it goes on sale if you have no nostalgia for classic beat em ups or are looking for something more substantial with your MS points. However if you were a fan of this game way back it’s hard to stay away from a well executed nostalgia trip. It might be a ‘for fans only’ deal, but if you are up for it, you’re in for a weird and fun (if very short) little ride.

For being a well executed port of a somewhat dated, but fun game: The Simpsons Arcade Game gets a B-