Ahhh, the Game Gear. It’s hard to believe it’s been almost fifteen years since Sega pulled its support for this polarizing little (ok, massive) handheld. While many gamers still glean a sick pleasure out of criticizing the system for its ludicrous, vampire-like battery sucking and its debatable dearth of quality games, some of us still insist it is a memorable and underappreciated chapter in the early days of handheld gaming.

Now, for the first time in well over a decade, Sega has released three of the most discussed Game Gear games on Nintendo’s 3DS. While the 90s children in the crowd stifle their outrage at such blasphemy, the rest of us are getting the chance to once again play these forgotten bits of handheld history, deciding for ourselves whether or not the system is worth remembering at all.

So, does Sonic: Triple Trouble deserve to be held up as single-handed proof that the Game Gear is more than a mere reactionary thrust of the sword at Nintendo’s Game Boy? Does Shinobi hold its own when compared to its more modern counterparts? Is Dragon Crystal an involving RPG that just deserves a few more modern players? Or should the Game Gear just remain a fond memory and nothing more?

Read on as Scott Morrison, Flake, and I tackle the first batch of 3DS Game Gear releases. 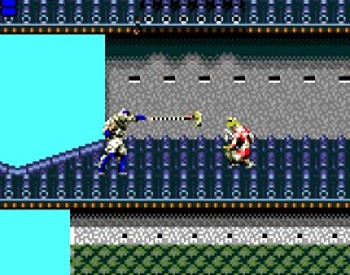 After playing The G.G. Shinobi, I have realized that this is the Game Gear’s version of Mega Man. How ever you take this observation of course depends on your view of Mega Man, so let me clarify. Shinobi is like the original series of Mega Man: difficult, but rewarding, incorporating strategy to get you through what may seem like a straightforward game using different abilities you unlock after completing a level.

The story is simple: your ninja comrades have been captured, and you must rescue them and use your reassembled team to defeat the big bad villain of Neo City… because Neo Tokyo was already overthrown by someone else. Each Shinobi ninja has a unique ability, ranging from deflecting arrows and ceiling crawling to a grappling hook or a double jump. Each ninja also has a special ability, which is powered by an item pick-up. The special abilities mainly kill all enemies on screen, but some also affect the area around you whether by destroying certain obstacles or bringing light to a dark room. 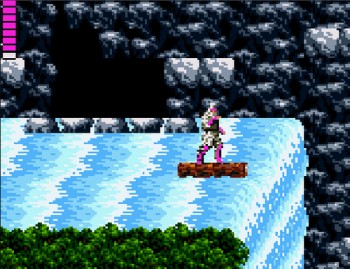 The levels in Shinobi include a forest, a busy highway, a harbor, and a waterfall area, all of which are well designed. At the end of a level, you must defeat your brainwashed comrade to then earn their help and abilities. Each ninja’s unique ability can be used to clear certain chasms, or reach certain items with ease. Known for its level of difficulty as a series, G.G. Shinobi holds true to this trend. Progressing through most levels require some memorization even to the point of knowing the location of off-screen enemies so as to hit them as the screen shifts. A good bit of G.G. Shinobi is also built on trial and error, but the triumph pays off when you acquire the help from your fellow ninja.

The “restore point” prevented me from turning my 3DS into a shuriken many times as there were many levels I had to repeat from the same save point, most notably in the randomized maze that composed the entire final level. Attempting Shinobi on the “dot by dot” screen setting was almost unplayable due to the small amount of pixels used on the original Game Gear screen compared to the 3DS. Even though I did enjoy the Game Gear system boarder surrounding the tiny game play, in order to progress comfortably I had to stretch the screen display to encompass the entire top screen. I for one did not know of the ninja special abilities until I read the digital instruction manual accompanying this 3DS download title. This makes me wonder how many people will give up with this game quickly if they ignore the instruction manual. Virtual manual aside though, no one needs instructions to know how to fight a helicopter on the highway. Any ninja can do that.

Shinobi is an excellent side-scrolling plat-former, however the difficulty level will definitely turn many away. Replay value can be found in playing through the different stages in different orders while utilizing the different Shinobi’s abilities. The anticlimactic ending does not warrant a maze of death traps, but it is still somewhat satisfying when you see your ninja hero exit silently in the night. For $3.99, Shinobi is worth a try, and is a decent handheld game with quick “pick-up-and-play” levels that are good for a quick ninja fix. 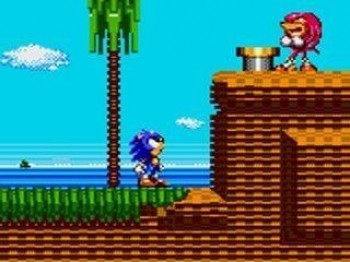 It’s no surprise that the Game Gear Sonics have been requested from the moment Sega first announced that they’d be bringing games from their dead handheld to the 3DS. Because the wholly original Triple Trouble and Sonic Chaos stood in the shadow of their big brothers, it seems obvious that the developers were allowed to toy around with the standards of Sonic’s gameplay a lot more than Sonic Team. Developer Aspect threw in a bevy of new ideas and design choices, adding a refreshing twist to Sonic’s normally rigid formula. Triple Trouble can be credited for the bulk of these ideas.

These changes aren’t exactly subtle either. Sonic can now can ball up and attack after bouncing off of a spring, a welcome change from his usual vulnerability. Most of Triple Trouble’s bosses are giant robotic animals, replacing the usual Robotnik repetition. There are entertaining new powerups like rocket shoes for Sonic, accelerated flight for Tails, rideable springs for both characters, and drill ships in underwater stages. Even little touches like the ability to skip across water really make Triple Trouble feel like something completely new, even though the basic gameplay still remains considerably solid and recognizable at its core.

Perhaps the most noticeable game-changing alteration is Sonic’s new-found ability to hold onto some of his rings after being hit. While this was balanced out by the fact that only one or two rings can be regained after impact, this modification does have a significant effect on how lackadaisically I navigate some of the game’s notoriously spike-filled worlds. It makes some of the more difficult stages a bit more bearable, and certainly helps to lessen the sting of some of the game’s cheaper moments. 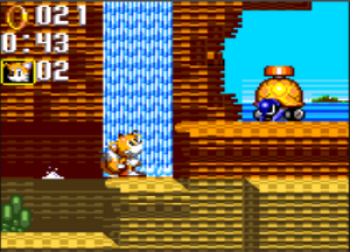 Triple Trouble’s level design is a bit of a mixed bag, especially towards the end of the game. The first couple stages (namely the bafflingly titled Meta Juglira Zone) offer quite a bit of fast, cleverly designed, fluid fun, even with the small handful of unpredictable pits and jarring stop-and-go moments that have always held 2D Sonic back at least a little bit. The last couple zones, however, get a bit confusing and labyrinthine in design, and are littered with an abnormal amount of unfair traps and spikes that lead to death after unfair death. These issues are further exacerbated by the dated Game Gear’s technical limitations, like breakaway floors that don’t offer any visual hints to identify them as something to avoid, or a boss that doesn’t provide the appropriate feedback to your attacks, leaving you confused as to whether or not you’re even doing the right thing.

Really, Triple Trouble is a game that any Sonic fan needs to play at least once. This goes especially for anyone convinced that Sonic has no ideas left buried in his spiky blue fur. Triple Trouble offers a load of inspired and interesting ideas, as well as a handful of solidly designed and thoroughly enjoyable stages. It’s just too bad that the best of these ideas don’t cover a handful of particularly bad ones, namely the confusing and frustrating level design found in the game’s twilight moments. If you can overlook the Game Gear’s dated hardware and a couple of frustrating stages, you’re bound to get some real fun out of this handheld chapter in Sonic’s life. 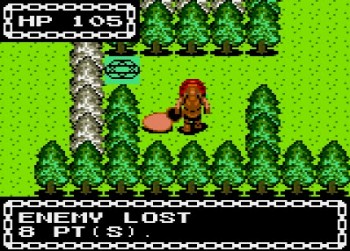 First of all, I applaud Sega for having the guts to re-release this game in its first wave of Game Gear games for Nintendo’s 3DS shop. Sonic and Shinobi, although warmly received, were almost too predictable. Dragon Crystal making the cut threw me for a loop and made me run for Wikipedia. Dragon Crystal is that rare game that reminds you of about four or five other games. Within seconds of playing I was reminded of Dragon Quest, Crystalis, Ys Chapters I&II, “Rogue Likes”, and the Legend of Zelda. What a star studded roster, right? The problem with this is that while Dragon Crystal does a little bit of what each of these games does, it does not do anything as well as any of those legendary titles.

To elaborate: Dragon Crystal uses the walk and ram style gameplay that Ys pioneered, a mechanic that I personally love. However, since you are constantly trying to walk into random parts of walls in hopes that you find a secret passageway, the “walk and ram” aspect of the game gets in the way of your progress. You always have to choose to do one or the other; attempting both means you will do a sloppy job of exploring the maze and get your ass kicked in the process. Complicating that is that the game mixes the “walk and ram” with something akin to turn based combat. Not only are your options for interacting with the game severely limited, the execution is horribly awkward and clunky. 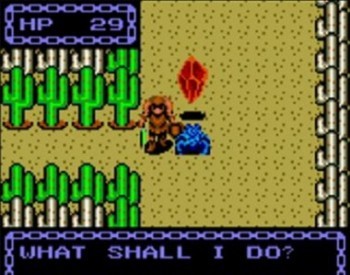 In appearance, the game definitely channels Crystalis or Zelda but the semblance is shallow at best. Procedurally generated levels are a really cool thing (See: Rogue Like) but there is a reason why they were the domain of PC gaming for so long. A game needs to have some serious resources to keep the visuals varied and interesting. Dragon Crystal does not offer a lot of variety between levels and this can get very frustrating, especially if you put the 3DS down for a minute and forget where you were trying to go.