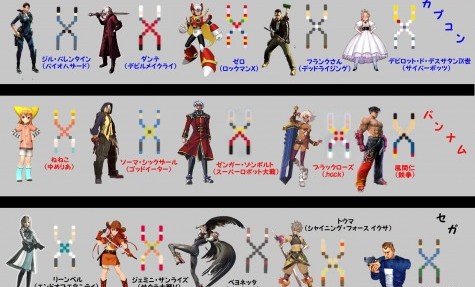 It appears that one of the most intriguingly veiled teases of the year may be revealed soon. Namco Bandai has trademarked two new properties, Project X Zone and All Star Battle. While either one of these could be the fruit of the company’s hyped collaboration with Sega and Capcom, the former title fit’s the teaser site’s URL.

Neither title really clears much fog, but All Star Battle sounds like a mash-up fighting game, and I am ABSOLUTELY ok that. Whatever the case, this news is a little less aggravating and vague than a pitri dish filled with a handful of chromosomes.

Speaking of that pitri dish tease, the intriguing image you see above has been circling around gaming forums, and if you ask me it’s pretty convincing. It attaches characters from all three companies to each chromosome, suggesting that the 3DS game in question may very well be a mash-up fighter. Considering that Capcom is involved that’s hardly difficult to comprehend.

What about you guys? Anybody have any idea what Project X Zone or All Star Battle could be? Will Tom Kyzivat finally have his wish of a Sega Vs. Capcom (Vs. Namco Bandai) brawler?

Persona 4: The Golden getting an anime adaptation