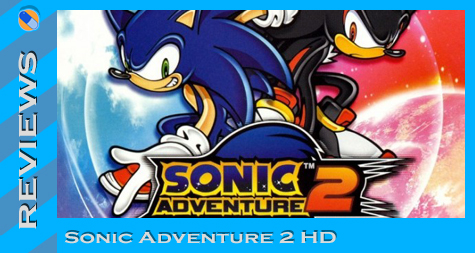 Love it or hate it, Sonic Adventure 2 is the latest of Sega’s Dreamcast titles to get an HD release. At the time of its original release back in 2001, Sonic Team sought to bring Dreamcast owners a game that surpassed Sonic Adventure and in many respects they had succeeded. Sonic Adventure 2 was generally a faster paced game, with a more modern soundtrack and improved graphics which better utilised the Dreamcast’s capabilities. Unfortunately the game suffered from a major control and camera issues which have tarnished the game’s reputation ever since.

Did Sega live and learn from their 11 year old mistakes? Have they done enough to fix Sonic Adventure 2‘s issues, while successfully bringing the game to HD? Have they managed to make a classic out of what was once a rough diamond? Hit the jump to find out! 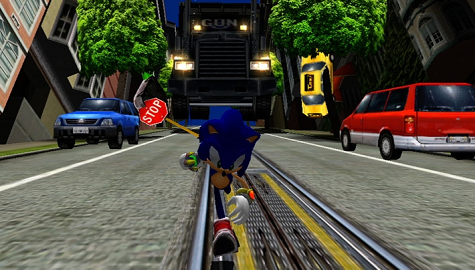 ‘Sonic Adventure 2 HD’ is the most accurate description of what this game offers graphically or otherwise. Sega has essentially taken the Dreamcast game, cranked the resolution up and slapped on a widescreen aspect ratio. The colour and vibrancy of the original version is back in full force, and without a jagged edge to be seen the increased resolution certainly goes some way to help the game look more presentable on a HD telly, but unfortunately this is as far as this ‘remaster’ goes.

The aforementioned vibrancy only highlights the outdated Dreamcast textures and backgrounds which have been brought across without modification. Other easily remedied graphical issues such as pop-in and short draw distances give the impression that Sonic Adventure 2 offers nothing more than than very precise Dreamcast emulation. 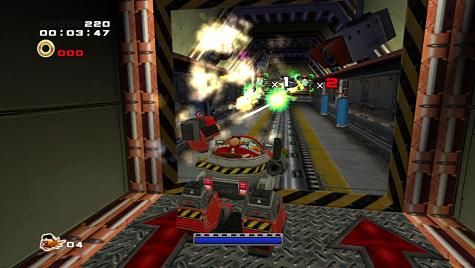 For a game with an abundance of cutscenes, Sega, for whatever reason, have not widened the aspect ratio for half of them. The fact that some of the cut scenes are in widescreen show that there was no technical limitation in doing the same for all of the cut scenes. This occurs in no discernible patten, and when combined with the problems mentioned above, this so called HD ‘remaster’ really starts to reek of laziness.

At times the game gives the distinct impression that the port is not only rushed, but actually unfinished. Following the completion of one stage I was inexplicably taken to what must have been a test level. After some research I found that this same test level was accessible in the Game Cube version of the game, but only using a physical cheat device. Regardless, the only way for me to exit was to exit via the menu. No damage done, but the experience was confusing for me, and should be embarrassing for Sega.

The gameplay itself is split into three distinct modes. Sonic and Shadow’s levels are fast paced, adrenaline pumping races to the finish. Tails and Dr. Eggman, donning robotic walkers, take the speed down a few notches in linear platforming levels with a focus on maximising scores through locking onto as many enemies as possible before firing.

Most of the total time spent with Sonic Adventure 2 will be spent with Knuckles’s and Rouge’s treasure hunting levels where three hidden objects must be found within increasingly bigger levels with nothing more than a few clues and a proximity based detector. Sometimes racking up 10 minute plus completion times, these sections are generally quite a bore, and only have you longing for another one of the exciting, yet short Sonic or Shadow stages.

The first few hours of blasting through urban areas, military bases and Egyptian pyramids with Sonic and Shadow are definitely a blast. Tail’s and Eggman’s shooty robot madness help to add some variety and even the first few treasure hunting levels are bearable. However, even with three gameplay modes, the lack of variety within the levels themselves combined with the unavoidable camera and control issues, which will be discussed later, will have most newcomers wondering what all the fuss was about.

The Chao Garden returns as the world’s most advanced ‘tamagotchi’ system which works in exactly the same way as it did in previous versions. Chao stats can be increased with Chao drives and animals found within levels, and can then be raced against each other. This is all well and good, but the lack of any sort of online interaction, be that full-blown Chao trading, or simple online racing, would have vastly increased the longevity of the game, with the inability to transfer Chao to and from the HD release of Sonic Adventure being a disappointment. 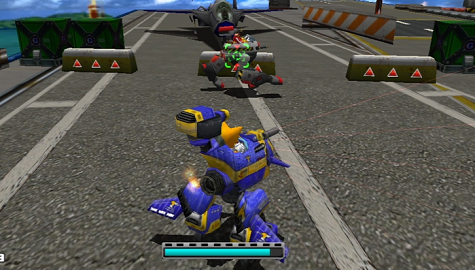 Sonic Adventure 2‘s soundtrack is back in full force and sounds just as great as it always did. The levels for each individual character have their own musical style and while the majority of these tunes are pretty timeless, this review simply would not be complete without calling Sega out on their 11 year old decision to back Knuckles’s levels, the longest levels in the game, with repetitive and simply annoying rap music.

Sonic Adventure 2 does also suffer from some genuine sound issues. In most cases the game is too loud for its own good. For example, in cut scenes and during gameplay, the music often drowns out the voice acting, with the voices that can be heard being scratchy. Some of the individual sounds themselves are also crackly, and I some cases, extremely piercing.

Although I don’t suffer from such audio issues with other games, I checked my speakers against the GameCube version and found that it too suffers from the quiet voices, but not the piecing and distorted sounds.

Again, it’s a pity Sega didn’t clean up the sounds and voices, or at least remix the various sound levels. Even an option for the player to change the individual sound levels for music, effects and voices would have been appreciated. 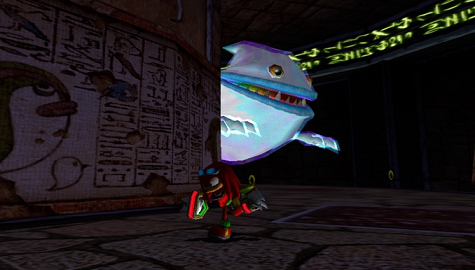 Those happy to accept that they’re paying for an mostly unmodified port of the original Dreamcast game may be comforted to know that the controls have also remained completely untouched. Newcomers, however, will undoubtedly experience control and camera related frustration at some point or another as unresponsive jumping, slippery footwork, finicky rail hopping and uncontrollable homing attacks drain the lives away.

Such control issues are amplified ten-fold by an unwieldy camera which in most scenarios is locked into position, focusing on the direction the character will be moving in. The problems occurs when any sort of back tracking or minor exploration is needed. Moving characters towards the camera will cause it to flip back on itself, move either directly above or below the character, or clip through objects and buildings, obscuring the action.

Ambitious players can attempt to wrestle with the camera using the right stick, although only horizontally. Vertical movement of the camera would have offered great benefit to the treasure hunting levels, as well as in the Chao Garden. But again, Sega missed a great opportunity to alleviate what is one of the game’s most notorious flaws. 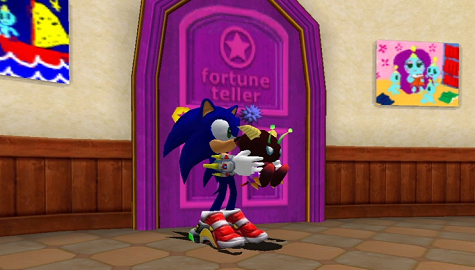 Priced at 240MSP, the DLC will add the content that was originally released with Sonic Adventure 2 Battle for the Nintendo GameCube, namely Chao Karate, some additional two-player characters and skins, and a bunch of two-player levels. Online multiplayer is not available.

The fact that Sega are asking 800MSP for an extremely basic HD release of Sonic Adventure 2 with no additional features, aside from an online leaderboard, is disappointing in and of itself. However their audacity in asking an for an additional 240MSP for features cut straight out of the ‘Battle’ version of the game is genuinely infuriating. The DLC does not include any newly developed content whatsoever, and comes across as a tacky attempt by Sega to squeeze as much money out of their fans as possible. 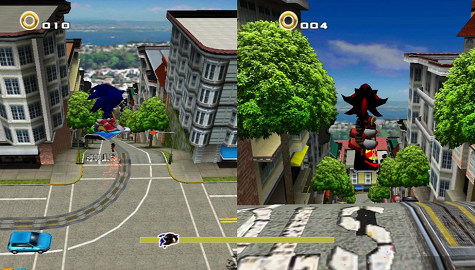 And where is the download exclusive content from the original Dreamcast version? The Christmas and Halloween themed character skins? Where’s the Opa Opa kart and the extra high-speed trial tracks? Well, considering the large list of missed opportunities generated during this review, in my opinion, Sega simply couldn’t be bothered to include it.

The ‘standard’ version of the game offers a large amount of replayability in the form of the Chao Garden and extra ‘missions’, where levels are played with different objectives e.g. are collect 100 rings, find a hidden Chao, time attack mode and more. Provided you are able to put up with Sonic Adventure 2‘s control and camera issues, the game offers hours of further gameplay long after the main story mode is complete.

In all honesty, I could have written 95% of this review without picking up the controller as, aside from the HD resolution and what is mostly a widescreen aspect ratio, Sonic Adventure 2 HD is a like-for-like copy of the Dreamcast game. While there’s nothing empirically wrong with that, for a 800MSP title in competition with other enticing new releases, one would hope Sega would have at least tried to add some extra bang for their customers’ buck. 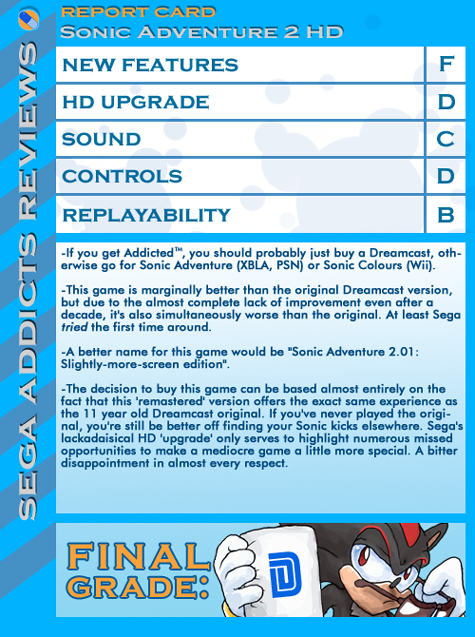