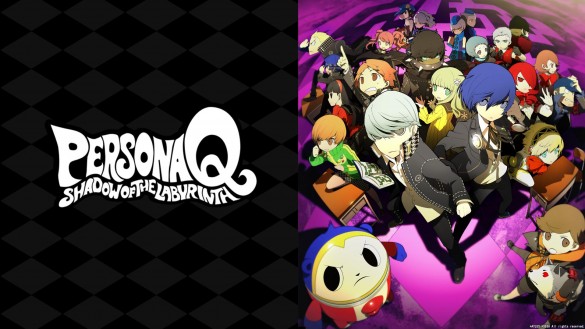 Say what you will about Atlus as a company, but no one can deny their ability to effectively ride a profitable gravy train. With the explosion in popularity enjoyed by Persona 3 and 4, we’ve seen spin-off after spin-off, with at least one more on the way and all of them being successful in one way or another.  I don’t know about anyone else, but I hope Dancing All Night can satisfy my desire for a good new rhythm game.  For now, though, I have a fairly engrossing and lengthy RPG to hold me over.

As a quick side note, my knowledge of the Etrian series is nonexistent, as I’ve never so much as played a demo for any of the Etrian games, so I will be talking about gameplay aspects and giving my take on the game solely as a fan of the Persona series. 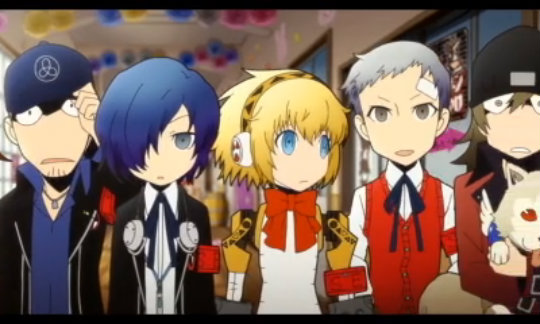 Everyone’s favorite brotagonists are back in Persona Q, a quaint crossover that features the highly-anticipated team up between the cast of Personas 3 and 4 in another dungeon-crawling, subconscious-probing adventure.  The general premise of the story could, in some ways, be considered the results of a decent PG/PG-13 fanfiction involving both sets of characters: a bit contrived and really just an excuse to bring all of the characters together, but still exploring the realm of the psyche in a fairly interesting way as Persona tends to do.

If you’re a fan of the Persona series like me, you’ll be pleased to find that many identifying features from the latest installments are quite intact in Persona Q. With the exception of the new characters Zen and Rei, all of the characters should be very familiar, and the music’s general style is similar enough to make any Persona fan smile and nod along in classic Shoji Meguro style. Most importantly, though, players can enjoy more of the same kind of playful chatter between the characters that they’ve grown to expect.  The art style may be vastly different, but the essence of the characters is still proudly on display. 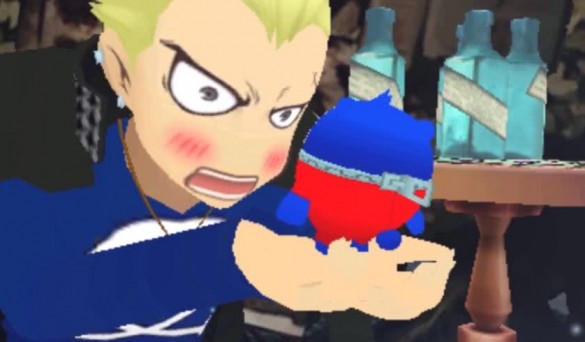 Upon entering the realm of gameplay is when players begin to experience vast differences from what they may be used to with the Persona series.  For instance, exploring the dungeons is done in a stiff, first-person grid format as opposed to being free-roaming.  In addition to this, a vast majority of battles fought in Persona Q are random battles, while in Persona 4 a player could see the enemies on the map beforehand and get the jump on them via skill rather than luck.  The dungeons themselves are designed in the same general way as Persona 4’s in that they are essentially reflections of the characters’ minds, although the correlation is not made plainly obvious until players make progress in the story.

Combat in Persona Q is menu-based and with a lot of very familiar-looking skills and abilities, but players who enjoyed the battle animations in Persona 3 or 4 will be disappointed to find that they’re almost completely absent.  Also different is the need to configure a battle formation for a 5-character party and the splitting of physical damage into three types: cut, stab and bash damage.  Each character does a certain type of physical damage and is better in the either the front row or the back row, so players are free to pick and choose who to form their ultimate party with. Those who played Persona 1 and 2 might be used to the separation of physical attack types, but being unable to place their characters in a custom formation may knock them for a loop.  Meanwhile, players of Persona 3 or 4 that enjoy leaving their teammates to their own devices in combat will be disappointed as that option is no longer available, but the Rush option is still intact. 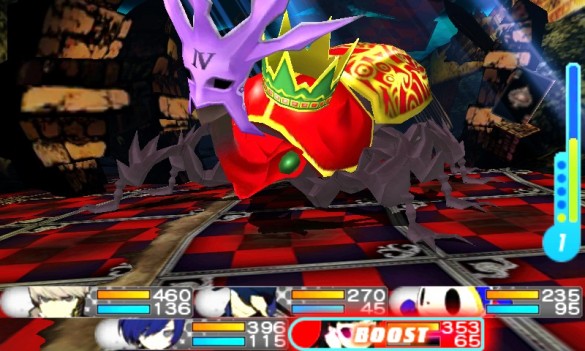 Another feature that would be new to Persona fans is the Boost status, which is obtained by either scoring a critical hit on an enemy or striking with one of their weaknesses.  If you do not take damage before your next turn, you will not only have priority during the attack order for the upcoming turn, but the skill you choose to use will have no cost, meaning that your strongest physical attack will cost 0 HP, and your strongest or most useful spell will cost 0 SP.  Naturally, this feature is incredibly useful in both laying the smack down on powerful enemies and conserving HP and SP to make each dungeon dive more productive.

The equipping and use of personas in Persona Q is also vastly different than fans of the Persona series may be used to.  Instead of being able to carry 10 different personas into combat with them, the Persona 3 and 4 protagonists are only allowed to carry 2, just like every other character.  The power of the Wild Card is still present, but the rules are different- while each character has their main persona, including the protagonists from Persona 3 and 4, they are also allowed one additional sub-persona that can be changed and substituted.  Each sub-persona offers a multitude of benefits, including skills that the character in question may not be able to learn normally as well as an HP and SP boost upon equipping them. However, while each character is allowed to change their sub-persona, they are not able to do so in combat, so be sure to prepare your winning persona combinations before getting into a fight.

Despite all the differences in the battle system and general set-up that might catch Persona fans off guard, the game still isn’t difficult by any means. The addition of sub-personas makes it easy to make all of your favorite characters work at the very least decently well together as a team, as you’re able to mix and match skill sets to partially customize your characters. If you’re having trouble getting the personas you want or need, not to worry- there are a couple of different ways to obtain powerful personas that don’t require much if any effort. Besides the power fan-favorite personas available as paid DLC such as Magatsu Izanagi, Kaguya, and Thanatos, you can obtain other custom-made personas via Streetpass or by scanning QR codes.  Want a particular skill for your favorite character that can’t normally learn it?  No problem!  Instead of having to take the time to fuse a persona that has that skill, you can simply extract certain skills from certain personas and teach it the character of your choice. If that weren’t enough, combining boosting your party’s critical hit rate with low-cost, multi-hit attack skills make it really easy to obtain Boost status, which in turn lets you utterly dominate your enemies using powerful but incredibly expensive attack skills such as Megidolaon for free or nearly-impenetrable defense skills such as Lunar Blessing, which nullifies one attack against each character in your party for three turns.  This coupled with the fact that most bosses can have their strength, magic, or agility bound and are susceptible to status effects (including the final boss and even the secret boss) has the potential to make most of the game a breeze.

For all of its potential shortcomings, one very positive thing that can be said of Persona Q is that it has no shortage of fun content to explore.  On its own, the first playthrough of the story sans side quests seems to take most players about 60 hours, which is already fairly lengthy.  If you do any grinding or partake in the veritable smorgasbord of side quests, it’s fairly easy to double that number in your first playthrough alone.  Some side quests are highly beneficial, such as fighting Elizabeth to obtain items needed for special Persona fusions, while some are simply bonuses.  Subsequent playthroughs take significantly less time, with your party status, Persona compendium, equipment, and money carrying over into New Game Plus, which is great when experiencing everything in the game requires three playthroughs. 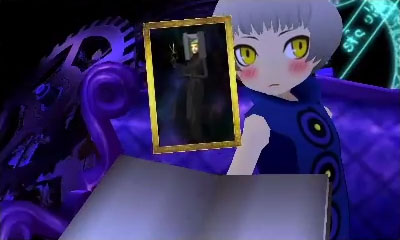 All in all, although Persona Q will certainly keep dedicated players occupied for a long time to come and is fun for the most part, the game itself is not very deep once you dig past the fan service.  If you ever wanted to know how the cast of Personas 3 and 4 would get along together, the game delivers in an enjoyable and memorable way.  If you wanted a deep combat system or was interested in playing it solely for the Etrian elements, however, you would definitely be better served searching elsewhere. To put my feelings on the game in terms that a Persona 3 fan would understand: on a scale from Mitsuru to Yukari, I rate it a Junpei. It’s honestly a bit stupid sometimes and can get annoying or tedious to deal with, but all in all it’s fairly good company.

Atlus has a new logo