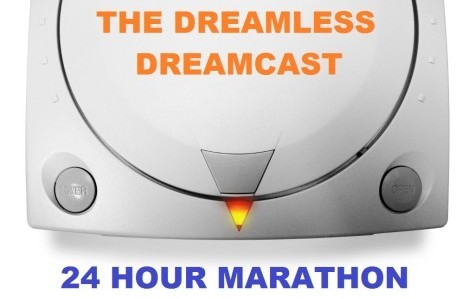 Wait a minute… didn’t that happen almost one month ago? It sure did! But that gap has given us enough time to reflect and maybe even review some of the footage from the insane 24-hours spent with our best buddy console: The Sega Dreamcast. I can’t believe this is my third go at the marathon, but let’s hear what everyone else had to say first.

As a quick reminder, everyone joined forces from across the entire United States to make this possible, but it was more thanks to all of you beautiful people for funding Nick’s trip to Philadelphia… and then to Pittsburgh! I want to give a big thanks to Nick for dealing with all our jokes around that, and also to Tom for power-manning his trip across the state, Brett for being a great co-pilot thru 2 states, and of course Elle and Prof. Sega Face for making the incredible 14-hour trek across half the nation. I love all you guys and was so happy to terrorize my neighbors, nearby convenience stores, and also Dave & Busters with you. Also big shouts to AJ and Anthony for making the marathon a blast and representing the home team. 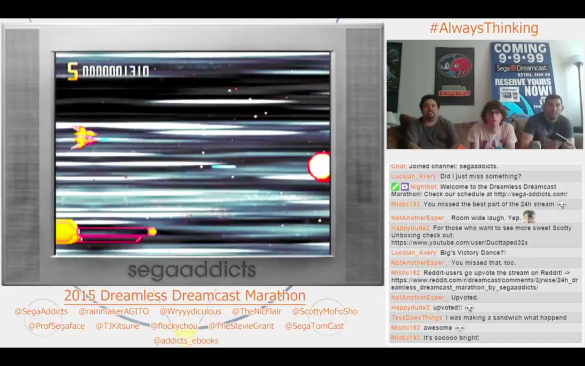 Without further ado, let’s hear what everyone thought of the marathon (and don’t forget you can click on any of the photos to get the full effect).

And well….well….well. Philadelphia. I mean…GOD DAMMIT. Pennsylvania, the least classy of the slyvanias, just below Transylvania, and just above Hotel Transylvania. Penn was a blast, and not just because it took me forever to get there. The locals were great, the food was cheap and superb, and the Marathon was awesome. I think the most interesting take away from the experience was the different games I ended up playing. I don’t really play fighters often by myself and I never play racing games, but with the gang, both were incredibly fun. Not enough to play on my own, but eh. Sonic Adventure was a blast, especially with everyone being pretty terrible and Scotty knowing basically nothing about Gamma’s stages. Hydro Thunder was a fun head to head challenge, Power Stone was fantastic with my coward tactics. The true highlights for me were Project: Justice (#TEAMFLOCKY) and Sonic Shuffle (#NeverGiveUp), with my victories filling me with the kind of pride that I could wash away the Philly mix-up with. In the end, the experience was unforgettable, and made me really fall back in love with gaming. I remember the glee and fun of simple games and have a new appreciation for the history of the Dreamcast. In short, go play Sonic Shuffle. 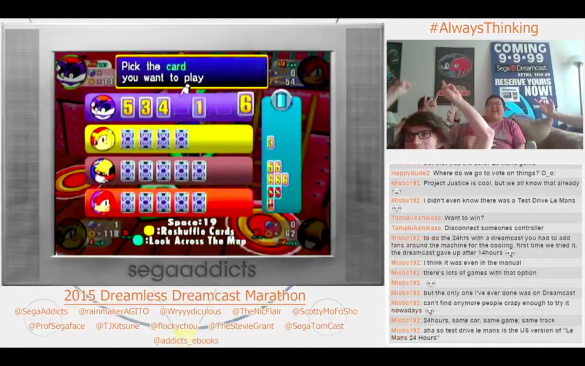 When you’re hunched over the toilet in a Pennsylvania rest stop outside of Lancaster, puking your guts out, you reflect. You think about your poor decision making; how possibly you shouldn’t have taken those caffeine pills after drinking all 2 liters of Brett’s RC Cola. Perhaps this is a fitting punishment. You pause, you think, you puke some more, and you wonder if the father helping his child with the toilet one stall over is going to report you for being a potential drunk. After washing my hands, I made a hasty exit, but not before buying more cola to keep me awake and make me sick again for the remaining two hours of driving. I threw up in the front yard when I got home and went straight to bed.

Not to say the Dreamcast Marathon was a negative experience. Not at all. I will never forget the competitive greatness that was Pen Pen Triicealon, or the rise of Team Flocky with Project Justice. This was actually my first times playing the Dreamcast with all four controller ports in use, and it was a blast. Least of all with Sonic Shuffle. More than just gaming, meeting Brett and Segaface for the first time was epic; especially Nick and Elle who I have known on twitter for years. Scotty was, per usual, a pleasure and an awesome host. What I’ll probably remember most is waking up from a nap at hour 24 and seeing rad people who I’m proud to call friends, dicking around with two fishing rod controllers and yelling like idiots at the TV. 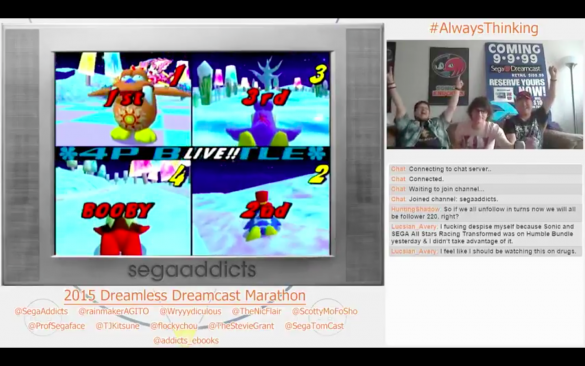 I sit in the increasing climate of this room to watch my fellow game enthuses play out there childhood. Reliving the innocence as they move the animated characters on the screen with playful twitches of the joystick. The excitement engrosses them as they shout insults and cheers, but through that I hear a voice. More of a whisper. Of a ghost in a long forgotten dwelling. The voice it speaks to me and it says … CHALLENGE! 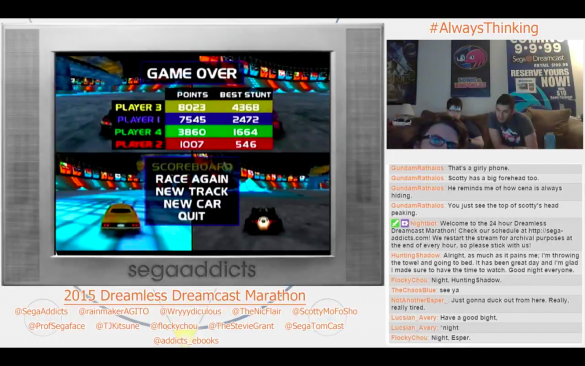 Looking back after journeying 100’s of miles, dodging a heat stroke, and losing a lot of sleep I regret nothing. Anyways, 24 hours straight of gaming turned out about how I expected. The biggest surprise for me was the games which made us the most hype, from “Tricelon” boobies to the final showdown against #TeamFlocky to Virtua Tennis intensity. I doubt it wouldn’t have been as fun as it was if not for the great group of jackasses that managed to gather under one roof against all odds. In the end, it was a lot of fun and I’d be lying if I didn’t say that from here on out I just might be looking for excuses to do something similar again. 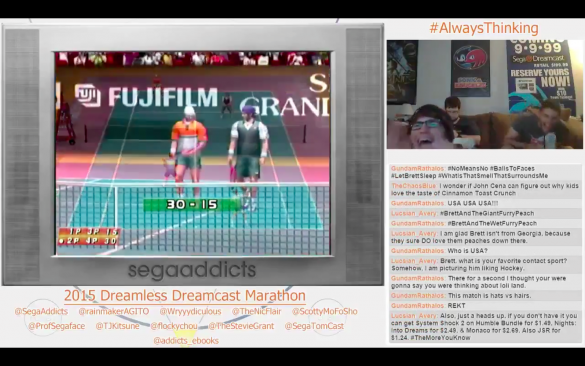 Despite not having been planned out at all on our end, I’d like to think that being able to travel nearly 2000 miles in a weekend running on the sleep equivalent of fumes and somehow managing to stay conscious for the vast majority of a 24-hour straight gaming marathon turned out to be a huge success!  Between laying the smackdown in Power Stone and Quake III and typing everyone’s pants off in Typing of the Dead, I really surprised myself with how not-terrible I apparently am at games.  In addition, getting to experience the hype of the Dreamcast and hear everyone else’s fond memories for the games and the system as a whole was amazing.  I never got the chance to even mess with a Dreamcast until well into my adult life, so it was a great crash course in what’s so great about it.  The best part, though, was probably just getting to interact with the team in person, and I think we all came out of the experience as better friends. 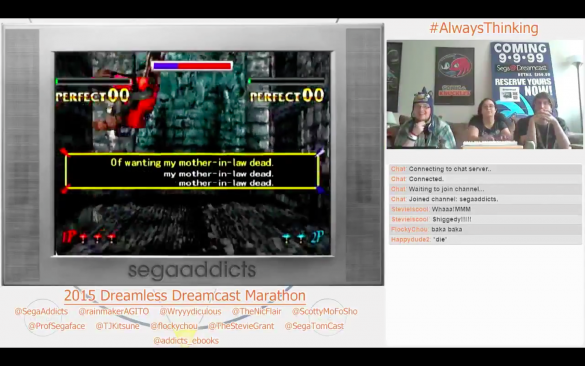 I don’t exactly know how to put my thoughts into actual words honestly. The turnaround from ‘site on the verge of death’ to ‘biggest event in site history with everyone in one place’ still blows my mind. What an incredible weekend though. I could talk about all my favorite moments, but I’m pretty sure I would need about a thousand paragraphs to include them all. Meeting everyone in person was honestly a dream come true, and y’all were just as fantastic as I’d hoped. Sappiness alert: I genuinely cannot say enough about how much I appreciate everyone, and all their efforts on making this thing work, and making it special. This is the best damn crew I could ever hope to work with and be friends with, without a doubt. I’m not sure what lies ahead for this marathon, but I can honestly say we made this the best possible one yet. Thank you all for watching and supporting this whole deal. It means a lot, and hopefully we can do all this again next year. Hopefully WITHOUT someone making a detour to Philly. 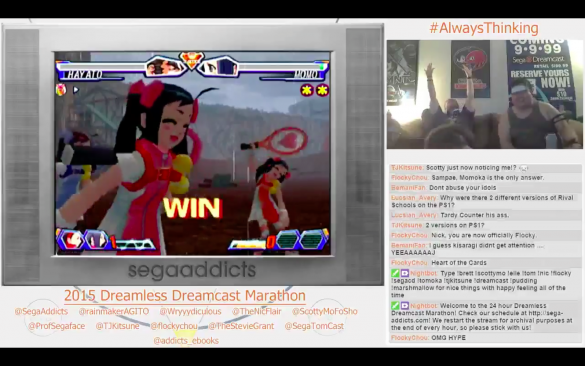 Thanks guys & gals. I really couldn’t say it better myself. Having gone thru 3 years of this has made it even more amazing to rewatch the marathon on YouTube to see how much it has grown. It’s amazing to think that I jumped into this thing on a whim with Josh Newey not too long ago, to then make the trek with Brett (and Tom & Stevie in tow) to now have 11 people at once sitting in my apartment yelling at a TV all together. That’s what a family is, right? Screaming at colorful electronics? That’s what I’m calling it anyway. And I want to again thank all of YOU, the viewers for sitting thru this insanity. With that, I want to list off the awesome people who lit up the chat during our 24-hour nonsense:

AND MORE TO COME as I am still making my way thru the marathon playlist, so check back or yell at us if your name didn’t make it on the list yet. Everyone who won prizes, those will be shipping out within the next week and I will send you a message letting you know when your package is on its way.

Don’t forget to check out our re-cap video podcast!

With that, here are a few fun photos including our “set list” and the room itself: 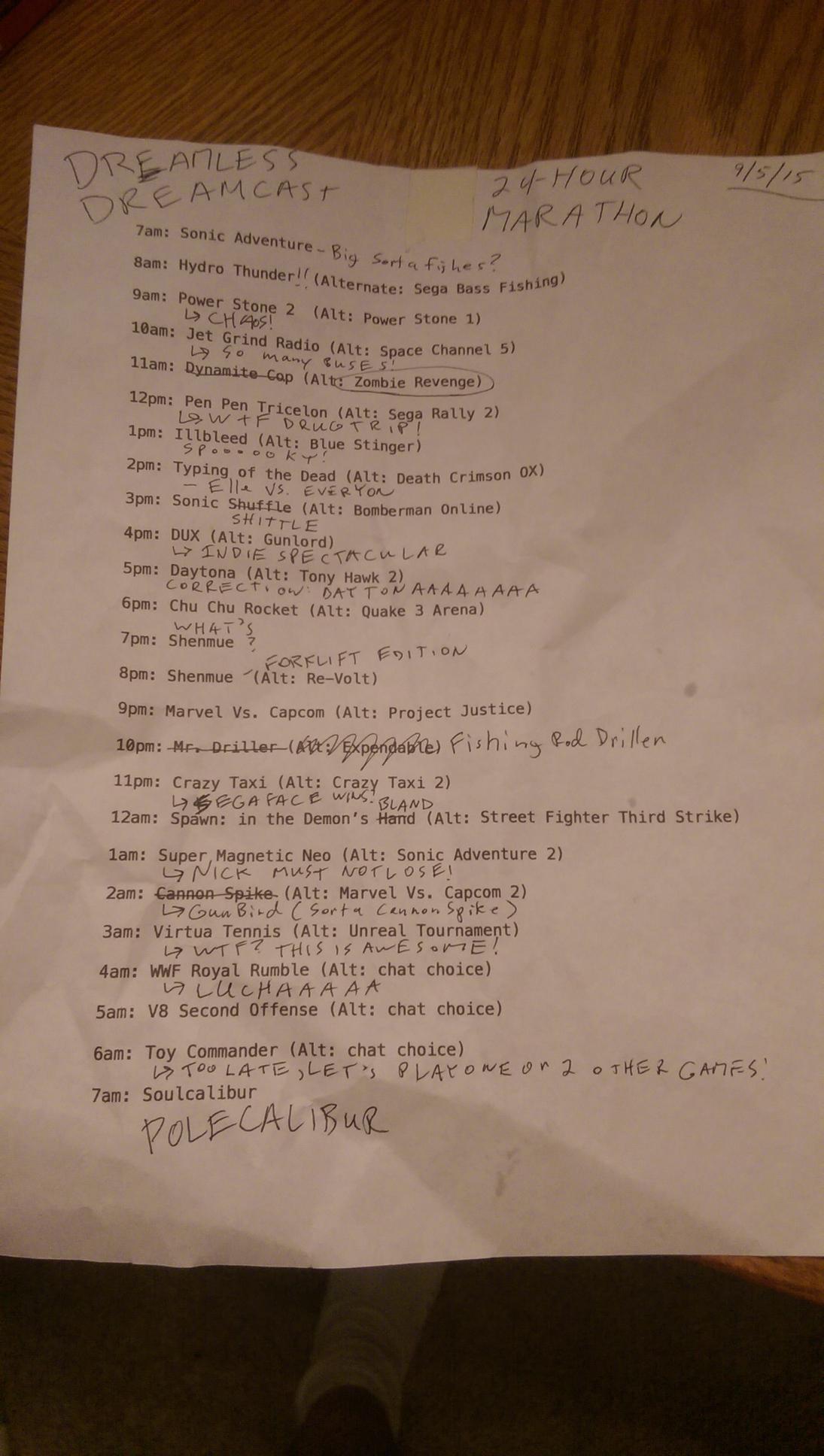 Again, we cannot thank you guys enough for the support and we can’t wait to do it all again next year! Until then, we know all of you are #AlwaysThinking. 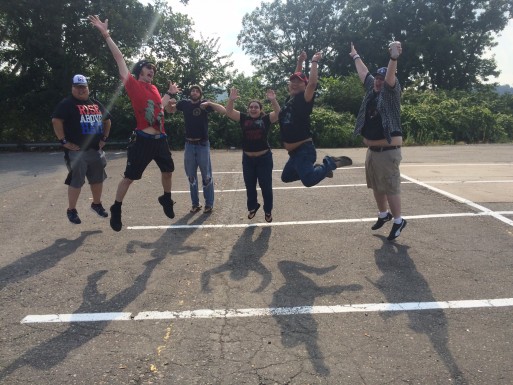 Have some new Under Defeat HD footage and screens