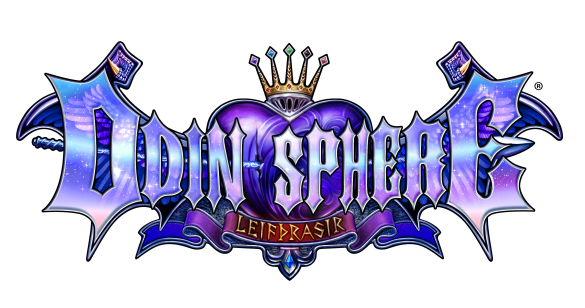 Atlus and Vanillaware seem to be celebrating Odin Sphere’s 10-year anniversary a year early! I wasn’t sure what to expect going into Odin Sphere Leifthrasir, as I never got to experience it in its original form back in 2007. The PlayStation 2 classic was known for being a gorgeous and fun action game that unfortunately suffered from issues with game balance and framerate, though it was known by most as a sleeper hit. Many still remember Odin Sphere fondly but seem to agree that the game had its flaws. That’s where this current gen remastering for PS3, PS4, and PS Vita come into play- to remedy the problems of the original while simultaneously building upon what made it great to provide players both old and new with a memorable experience.

Odin Sphere takes place in the world of Erion, beginning with a conflict between the Demon Lord Odin’s kingdom of Ragnival and the forest realm of Elfaria. Odin wants to obtain an artifact called the Cauldron and will conquer any nation that stands in his way. However, Odin has made many enemies, and there are a lot of different variables that come into play. While it sounds like a simple and straightforward story at first, you’ll be genuinely surprised in the directions the narrative goes. The story is identical to the original game: there are five stories for the player to experience, each with its own main character with different alliances and motivations embroiled in the same conflict. The characters you get to play as are Gwendolyn, daughter of Odin; Cornelius, the prince who was forcefully turned into a Pooka; Mercedes, the new queen of the fairies; Oswald, the dark knight who is in love with Gwen and is looking for his place in life; and finally Velvet, heir of the Valentine family. There’s something just so different about the way Odin Sphere tells what should be a traditional fantasy epic that kept the game’s story fresh and engaging. It took a bit of time to grow on me, but the tale told in Odin Sphere is quite a unique take on what is usually considered cliché. 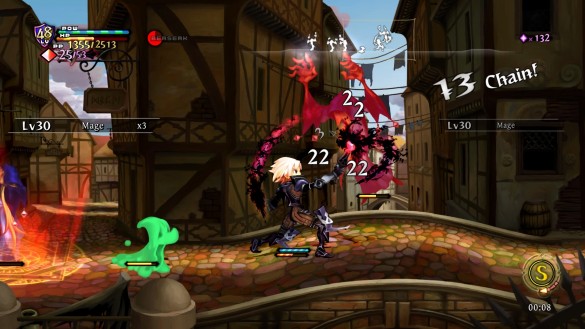 Initially, upon picking up the game, I noticed just how well the visuals have aged. All of the hand-drawn sprites and environments from the original game have been beautifully transferred to current gen hardware in gorgeous high definition. The animation of the sprites is equal in terms of quality to the art itself, and each character has incredibly smooth and detailed animation that will constantly keep you impressed. Since I was playing on the Playstation 4, I was able to experience it in full 1080p and 60 frames per second, and I’m pleased to say that the game was visually consistent throughout. The world looks absolutely stunning, and this time you’ll be able to experience each of the unique environments in glorious HD.

The audio is also an absolute treat to experience, as the soundtrack perfectly fits the fantasy setting. Each piece of music sounds absolutely beautiful, with each track fluidly transitioning from one to another as you explore, and sound effects are crisp and satisfying. I was very surprised to see that this game featured dual audio, as that’s rather uncommon for Atlus games to have. I played through the game with the English dub, and while there is some awkward lines occasionally, I preferred it to the Japanese audio. The Japanese audio is perfectly fine, but as I played the game the English voices just grew on me to an extent where I didn’t want to play in Japanese. 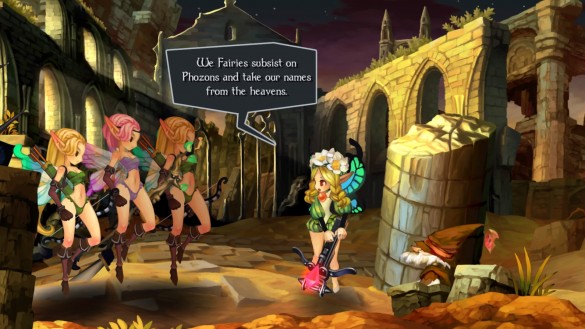 However, many people are planning to get this for that amazingly fluid action gameplay that Vanillaware is famous for, and thankfully this doesn’t disappoint. I was a bit worried that the combat wouldn’t have aged as well as, say, Muramasa: The Demon Blade, and I can say for certain that the combat as aged flawlessly well. The combat system is perhaps the best thing about this game and will justifiably be the reason many people will pick this up. It manages to be in depth and have a high skill ceiling while being very simple and easy to learn. Players attack with the square button, using different directions to get a different type of attack (sweeps, dash attacks, launchers, etc.) and can hold square to block. You can press triangle to open up the item menu, which from there you can use any of your collected attack spells/potions. Dodging is done by simply pressing R1 and is useful for scenarios where you don’t want the enemy to chip your guard meter down. Lastly, you learn special moves that can be mapped to the circle button and any directional combination you wish (that’s right, you can map in quarter circles). None of that is really complicated to learn, and with enough time you can easily master any of the characters and pull off impressive combos.

The normal difficulty is rather standard for an Atlus title, and the game is just naturally rather challenging. I never felt that the difficulty was really unfair, however, as it seemed to increase in proportion to my constantly increasing skill, and I wish more developers would try and make difficulty balanced around this concept. With each boss I felt I was prepared for the challenge, and I always felt that my deaths were entirely caused by my own mistakes. You can upgrade your weapons as much as you like, but player skill is important to surviving the challenge this game throws at you, which this reviewer is incredibly happy with. 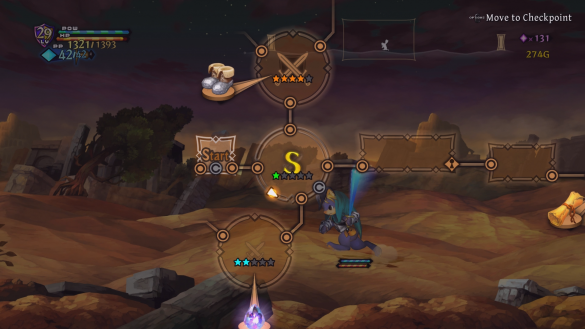 In Odin Sphere, you will be traveling from area to area on a 2D plane, fighting hordes of enemies that come to stop you as you try to make it to the boss at the end of the stage. There are branching paths in the levels, however, so each area is far from linear, and there’s a lot to see and collect, making exploration heavily encouraged. It’s fun to go off the beaten path and find hidden pieces of armor, special moves, items, and recipes. There are rest areas in every stage where you can make food and buy items/equipment, giving you time to breathe and relax if you need a break from fighting. Leifthrasir also features entirely new and remixed stages, so players of the original game will be treated to new level design. For those wishing to experience the original level design but just with the gorgeous new visuals, Atlus has you covered, as there is a Classic mode available from the beginning.

Speaking of taking a break from fighting, it’s very important to mention just how much there is to do when you aren’t plowing through hordes of enemies. This game features an extremely expansive set of mechanics involved with leveling up. You can gain experience by defeating enemies, but most of the experience your characters will gain will be from cooking and gardening. The cooking is done in rest areas, as you bring materials to Maury the traveling chef in order to make food that increases your max health and gives you potentially large amounts of experience points. Gardening is done by planting seeds in the ground and using phozons, purple crystals gained by killing enemies (among other ways), to fully grow the seeds. You can plant seeds in any location you wish, and the fruit that grows from them function the same way the cooked food does. It was always really satisfying to wait to move on to the next area to plant the large amounts of seeds I collected to gain a ton of experience and health back. Phozons can also be used to level up your special moves and main weapons. 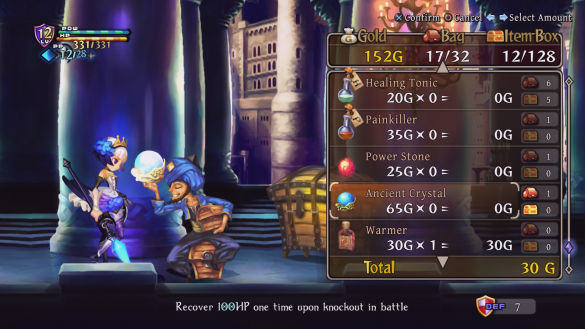 Each of the five characters has both a unique storyline and play style. For example, Mercedes’ book plays like a Shmup game, while Cornelius specializes in using a long sword in combat. You’ll get to experience every character’s side in this conflict, and what some characters see as “right” differs from how others might think. This sadly brings up my only and main flaw with this game. Since each book shows different sides of the same story, you will be playing through the same areas numerous times. The enemy types remain constant each and every time you revisit an area in a following book, and even the bosses and mini-bosses will show up repeatedly.  If the content in this game was not of such a high quality, the repetition would have been absolutely excruciating. This was really the only flaw to me that stood out, so all things considered that’s not really bad at all. Every time you go through a stage with a different character, there will be an entirely new layout with different items, so I never felt that the stages were bland carbon copies of each other. The intriguing story that each book provides also helps keep things varied, and you will see the characters go through many hardships to find the answers they seek.

After finishing the five character books, you unlock one final book that has you combining skills with each of main cast for one final showdown. I don’t want to go into too much detail because I’d be spoiling part of the ending to anyone who hasn’t played the original, but the way it handles its finale is something I’ve rarely seen done in gaming. If you grew to like the characters like I have, then be prepared for many touching scenes ahead. There is an extra book available to be unlocked that I sadly couldn’t get to because it required you to see and do almost everything, but it’s good to know that there is even more content for players who wish to keep on playing after the game’s conclusion. 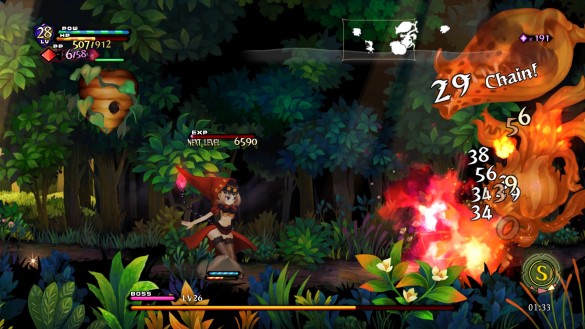 Odin Sphere Leifthrasir is a slightly flawed but incredibly enjoyable experience. I can’t stress enough just how minor the issues with it were, and I enjoyed my time with it very much. It’s clear that the issues that do exist (mainly reused bosses, enemies, and areas) are simply from the remnants of the original game that simply couldn’t be changed. The changes from one book to the next are different enough, however, that it didn’t make me ever get too sick of playing, but many players could find themselves wishing for more variety. Even so, Odin Sphere is an absolutely blast for fans of both action and fantasy RPG games, and I implore you all to give it a chance. 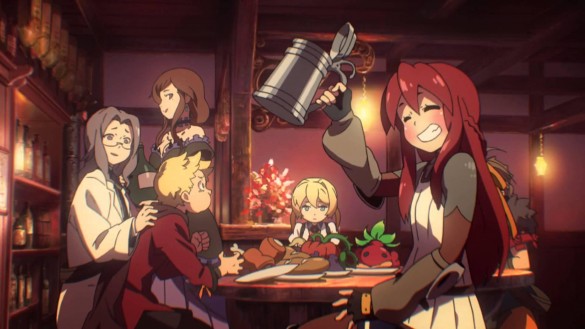