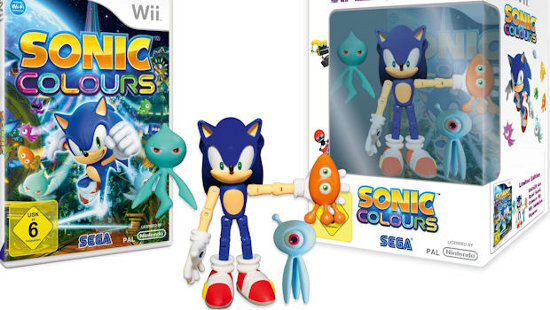 Being someone who has to always play the PAL versions of games, I usually have to wait ages and end up feeling bad because everyone else already played the game 12 years ago or something. But occasionally game companies will throw us European gamers something cool, like this Sonic Colours special edition!

This limited edition will come with a bunch of figures which of course include Sonic himself and a bunch of his wispy friends. Personally the Sonic figure looks a bit iffy with the massive joints but the wisps look good enough to put on any gamer’s desk. Still it doesn’t make up for that hat that America gets. I want that bloody Sonic hat.

Sonic Colors may be coming as early as September

Bayonetta has a figurine coming out in two weeks