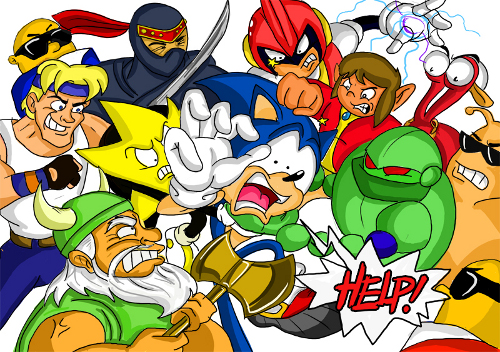 Hello everyone and welcome once again! I’m very happy to present this weeks instalment of what we’ve been playing as it is in 3D today! That’s right, put on your 3D glasses and the words will have depth to them! Wooooooooooooooooooah it’s the future! So hit the jump to read what the Sega Addicts writers have been playing over the week while a useless gimmick distracts, and takes you out of the experience as a whole.

Stevie Grant- Writer of Top 10 Worst and Boss Attack:
I (like some other people this week) have been stuck in university work, so I haven’t played a lot. However I did play De Blob (the first one) which I got from a bargain bin. Definitely had some problems but I dug it. Can’t wait to get the sequel sometime.

I also played the Rambo arcade game with two guns at once. That’s right ladies.

Brett Hatfield- Community Manager and Writer of Megadriving:
LOTS of Tekken 6, as usual. I’m on a massive roll online right now. Over the past two nights, I’ve gone 37-3 against friends online, and 64-5 over the last two weeks. I’ve gone freakin’ maverick somehow. Been going for trophies in NCAA Football 11, BlazBlue: Continuum Shift, and WWE Smackdown Vs. Raw 2011 as well, and tooled around with my AE-86 Trueno in GT5 a bit too. That car will be as godlike as the Initial D version someday, I swear it. Add in a little known game by the name of Pokémon Black (Friend Code is 0647 5130 3740!) and I’d say it’s been a good week.

Stan Spurgiesz- Writer of Night of the Living Console
I have been swamped with work this week. Thankfully I have had Shoko Rocket to use as my means of escape. Shoko Rocket is a free ChuChu Rocket clone from the Android app store. Though it does feel a bit like a flash game in contrast to its source material, it is still a wonderful diversion and a stellar tribute to ChuChu Rocket. If you are an Android owner and have not downloaded it, I strongly suggest it.

John Doherty- Writer of Take Cover:
Nothing but League of Legends. I have been so addicted to that game recently. Sorry to cut this one short but I’m staying with my girlfriend who is in the hospital.

Alexander Sargeant- Writer of Retro Reviews:
I am at PAX East, so I have been playing SO MUCH STUFF.

Most interesting though, would be the time I didn’t spend playing Child of Eden, because just watching it was more than enough for me. You can look at it, hear it, feel it, absorb it and understand with absolute certainty that REZ is back. I did get to play Arcana Heart 3, which was nice but pretty confusing. Skull Girls, which is an incredibly well animated fighter. EDF: Insect Armageddon, which is good..but definitely lacks the Sandlot touch, although the changes they’ve made really are pretty exciting.

FEZ which is just as good as you should know it is. Warp, a stealth-based game about teleportation that lets you shake until people explode. El-Shaddai, a sublimely gorgeous 3D hack-and-slasher with some ill-advised boring arena sections. Scrap..bolt…scrappers? Scrabble scrummers? Something, it’s coming out this week on PSN, but it’s effectively somewhere between Puzzle Fighter and Team Buddies. Really good fun. R-Type on its arcade cabinet, which was wonderful. Most amazingly, I played Asteroids on its old cabinet, and it looks brilliant. That sounds silly, but I never realised just how bright it actually is in person. And a bunch of other stuff which I’m sure you already know is great.

OH! And Toy Soldiers/Outland/That one that looks like limbo but you’re flying a spaceship. OH MY GOD PAX IS SO GOOD. If only I could talk about the panels here…

Pat Reddick- Community Manager/ Writer of Forum News and Not-so Classics:
I’ve been playing a lot of Radiant Historia this week. It’s such an odd but good game. The battle system is very interesting, and though it’s basically turn based it feels a lot deeper than that. There are things here and there that are somewhat annoying, but not as bad as it was in Dragon Quest IX and I put a good 30 hours into that game before rage quitting. That’s how I do DQ games though: I play a good chunk, abandon it for months, then go back and finish it later.
I play way too many RPGs.

Tom Kyzivat- Artist and Podcast Co-host:
Just more Marvel vs Capcom 3. Mike has been training extensively with Dormammu, Super Skrull and Sentinel (as if he needed it), so now he can do simple combos that nearly kill an entire character of mine. Awesome. Making one simple mistake can really dick you over in this game, even more so than the last game! Capcom’s really determined to give me a heart attack, I think.Somewhere in all that bitching I manage to have some fun, though.

Alex Riggen- Editor in Chief and Podcast Host:
Not much at all this week. I wanted to try and finish Panzer Dragoon Saga before Yakuza 4 came out but that’s definitely not going to happen. So, it looks like I’ll be taking a break from Saga starting Tuesday and continuing where I left off once I finish Yakuza 4. Other than that I have played nothing videogame related unfortunately.

And that was this week! I think I can speak for everyone when I say that I’m super jealous of Alexander Sargeant for getting to play tons of awesome indie games before I can get my grubby hands on them. Grr. Also my best wishes goes out to John Doherty whose girlfriend is in hospital. Hope all is well.
But that’s not all! Now you have to tell me what you’ve been playing! Yes! You! Amazing, huh? Just leave a comment and that. Anyway that’s it for this week. I’ll leave you with what Alex Barbatsis has done this week:

Alex Barbatsis- Writer of Retro Reviews and Freaky Fridays:
I saw two cats dying in each others arms this week.

What we’ve been playing: BIRTHDAY EDITION