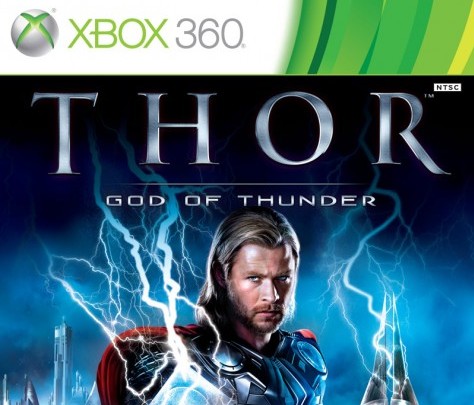 Yep, that’s right.  It’s another Thor game.  I’m sorry.  I can tell that the suspense is killing you though.  Is this the one you should pick up?  Can the prospect of a decent Thor movie game be saved by the addition of high definition visuals?  Could there actually be fun in this mind-numbingly repetitive, clichéd and horribly balanced piece of gaming frustration?

Oh crap, my poorly hidden malice just gave it away, didn’t it?  Oh well.  Hit the jump for more, please.  Oh God, PLEASE someone read this. 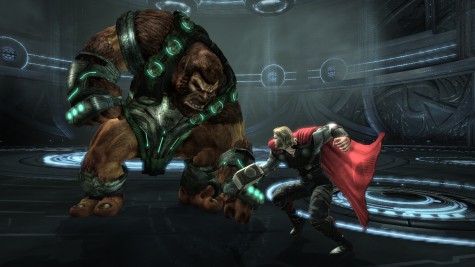 You know, it doesn’t seem to me like it would be that hard to make a decent Thor beat-em-up.  Hell, you’ve got the power of lightning, thunder and wind at your fingertips.  You’ve got the mighty and grandiose backdrop of Valhalla, the expansive girth of Marvel mythology and the unapologetically bombastic personality of The God of Thunder himself.  Games like the beloved God of War series owe everything to this mighty Viking hero, so there must be something good for gaming at this guy’s core.

But then again, this is a movie tie-in.  So, I take back everything I just said.

Well, let’s first get the good out of the way.  While it’s not the most polished looking thing out there, Thor actually boasts some rather pretty visuals.  The environments, while sparse in number, are detailed, varied and expansive.  The quality of the game’s textures fluctuate in from muddy to crisp, but at their peak level of detail they manage to transform some of the clichéd and uninteresting environments into something at least remotely engrossing.  My personal favorite was Vanaheim, an open Avatar-like jungle full of hairy trolls, little lizard people and lush vivid greenery.  Creature designs are often appropriately menacing, and despite their criminally limited variety, repetitive movesets, and generally sloppy animations, have some surprising visual impact.

For a movie game, Thor offers an impressive arsenal of unlockable moves.  At any point in the game, you can switch between powers of thunder, lightning and wind to lay waste to the enemies around you.  There’s a pretty expansive list of updates that you can apply to these powers, including a tornado that collects enemies up into a swirling cloud and an earthquake that shatters the ground below you and takes out anyone standing in your way. Even though the game does an absolutely abhorrent job of layering the control layout in any kind of coherent way, it’s nice to have so many options for beating the crap out of the regenerating wall of monsters around you. 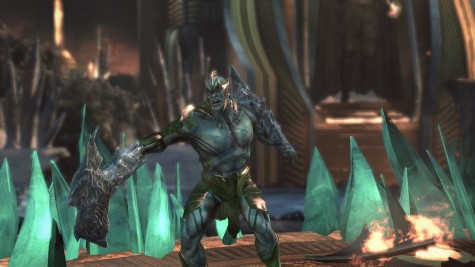 It’s hard to go much further, though, without stepping ass deep into the bad.  The controls for Thor are exceedingly simple, but still manage to somehow be absolutely confusing in their execution.  All melee moves are done by spamming X over and over again, accented with the occasional Y to trigger a glitchy and impossible to aim special move at the end of the “combo.” This is made much worse by the fact that the control in Thor is so sluggish and unresponsive. Hitting X a good eight or nine times will result in a scant few actual swings of the hammer.  Since each special requires a specific amount of button presses, it’s nearly impossible to tell just what special will come out when you finally get to pressing Y.

Thor can also throw his trusty hammer Mjolnir at enemies, but the targeting system is clunky and extremely difficult to control.  It can occasionally be satisfying using it to eradicate a gang of baddies at a distance every once in a while, but its effectiveness is extraordinarily inconsistent. The auto-targeting is a joke, as Thor will often just forget about the enemy right in front of him and instead opt to lob Mjolnir out towards some non-existent hallucination to his left that the player is apparently not allowed to see. It’s also particularly odd just how short range Thor’s throw is, considering how strong everyone tells me this guy is supposed to be. I grew ineffably furious several times throughout the game when something stationary that needed to be destroyed from afar inexplicably fell out of range between impacts. 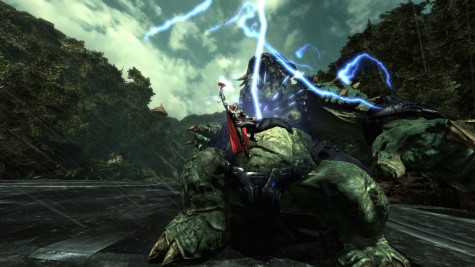 This sloppy design wouldn’t be nearly as frustrating to me if the gameplay wasn’t as repetitive and bland as it is.  Even though many character designs are interesting to look at, most of them are essentially identical, just with different skins.  There are the slower, giant beasts who don some kind of armor that you have to destroy before you can do more severe damage with a grapple attack.  Then there are the frisky, long-range enemies who repeatedly shoot from afar and can only be destroyed by your woefully inaccurate hammer throw.  Finally, there are the smaller short-range enemies, who you can grapple immediately to gather health and Odinforce (magic).  Every environment has its own rehashes of each of these enemies, and a few variations near the end of the game are not likely to shake you out of your half-dead stupor.

I don’t mean to direct all of my ire towards the creatures either.  Thor himself looks as sedated and uninterested as the player feels.  His voice acting is infused with all the enthusiasm and emotion of a soccer mom reciting her grocery store parking space into a voice recorder.  It doesn’t really matter how good his acting is, since the sound of just about every line of dialogue in the game is drowned out by ambient noise and tepid music. The animations for Thor’s moves are all jerky and sparse, and watching little flits of lightning spark out of his hammer as it glitches through the environment is just saddening. 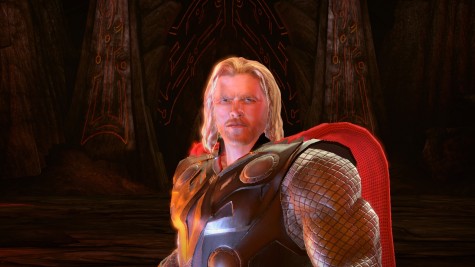 Above all these transgressions, though, are the incredibly unbalanced boss battles.  As with the rest of the enemies of the game, almost every one of these encounters is identical.   These creatures come packaged with constant overpowered unblockable and undodgeable attacks, recharging health, and aggravatingly misleading grapple prompts.  Each battle is about hammering (get it?) on your attack button until their armor is shattered, struggling with the incredibly touchy grappling window in front of you, trying to initiate a God of War-like quick time quarrel, then getting smashed to the ground because you’re apparently too slow or the boss still has too much health.  Even with a solid understanding of what the game was asking me to do, I ultimately felt like I was flailing in most of these battles, struggling to follow the rules that the game tried to set at the beginning and had been diligently breaking ever since.

All of this being said, I will admit that there is some mindless fun to be had at certain points in Thor.  The grapple moves easily result in the very best animations of the game, finally giving the player some sense of might over the creatures around him.  Climbing onto an ogre’s back, grabbing the top of his jaw and summoning a bolt of lightning to shove down the creature’s throat is exactly what I wanted from a Thor game.  The combat, while choppy, repetitive and clichéd, is somewhat livened by Thor’s rather large arsenal of moves.  I just wish I could do half the stuff that the game claims I can. 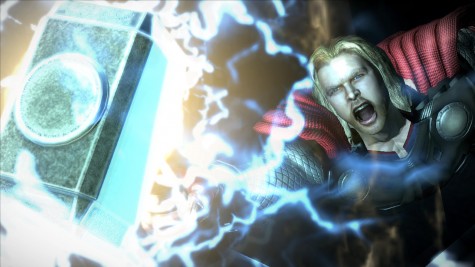 At its best, Thor manages to provide some brief, meaningless beat-stuff-up fun.  That’s before you get to the copycat enemies, the brazenly cheap bosses, the hilariously glitchy and unexplainable deaths (“How the hell did that hit me?”), the unresponsive and incoherent controls, the buggy combat, the sedated voice-acting, etc. etc. etc.  Thor: God of Thunder isn’t the worst among movie games, but it does nothing to help their reputation.

Yuzo Koshiro released a game this year that you probably don’t own yet.