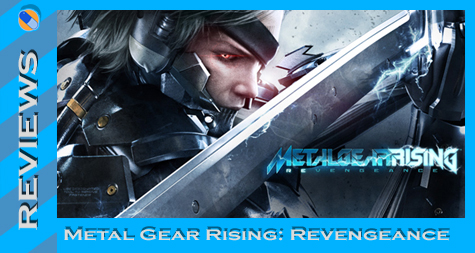 There are very few series I love more than Metal Gear, and even fewer characters I adore more than Raiden. So when it was announced he was getting his own game, based around his newly acquired cyborg ninja skills, I couldn’t have been more excited.

And then nothing else came of it. Outside of a small teaser trailer, the game had practically fallen into the shadows, and at one point, Hideo Kojima quietly canceled the original Metal Gear Solid: Rising. That is, until he decided to bring action game gods and unofficial Sega development powerhouse Platinum Games into the fold to help finish Raiden’s big day out.

Armed with a new title, a new gameplay focus, a healthy dose of attitude not seen in the Metal Gear series before, and a team of two of the best development teams in the business today, Metal Gear Rising: Revengeance has all the potential in the world to steal the mantle of this generation’s best action title. Does it live up to the hype? Hit the jump to find out. 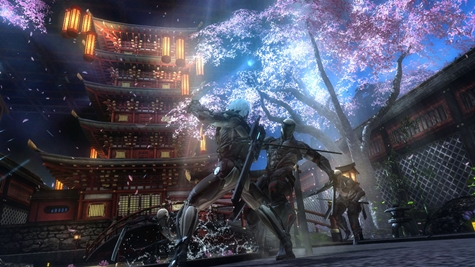 Let’s just get this out of the way early. If you’re expecting traditional Metal Gear in practically any way, you might want to check those expectations at the door. Aside from the graphical flair and–to quote our sociopathic cyborg hero–at times “batshit insane” story, this is as far from your typical stealth thriller as games get. Instead, you’ll be out in the open, actively instigating battles and slicing up foes with a level of flashiness that would make even a professional wrestler say “dude, tone it down a notch, that’s waaaay too much”.

And if I made that sound like a bad thing, well, I’m sorry, because it’s actually one of the most enjoyable things about the game. The presentation is off the scales here. Graphically, it’s the most stunning game Platinum has ever done. Main character models look incredible, menus and HUDs are easy to read and navigate, and the flair with which you take down enemies is so well done and satisfying to watch. There aren’t many games out there that will make you feel as much like a badass when you pull off a big combo or signature move as Rising does.

If I have one complaint about the presentation, it’s that there’s not a lot of variation in level or enemy design. While both are fine as a whole, and there are some fantastic looking areas (such as the garden pictured above), it does get a little boring when you start seeing bosses and entire maps being recycled in the later parts of the game. Coupled with the game’s short length, you can’t help but feel this part of the development was a bit of a rush job, especially when we know Platinum can crank out some seriously amazing locales, such as the later bits of Bayonetta. 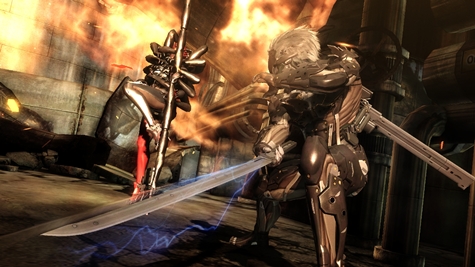 And sound wise, the game is just as good. The soundtrack was promoted as being the “first truly metal Metal Gear“, and it does not disappoint. Jamie Christopherson absolutely nails the vibe of the game perfectly with his compositions, and while some might not like lyrics in their battle music, I feel it really adds to the atmosphere of the boss fights. Once you hear the lyrics kick in, you know it’s ON, and it helps that the songs are catchy as hell. As far as the acting goes, everyone’s pretty spot on. While Quinton Flynn can be a little inconsistent with Raiden, his performance is still great on the whole, and the rest of the cast turns in a fine performance, with Philip Anthony-Rodriguez as Jetstream Sam and Crispin Freeman as Sundowner standing out in particular.

And speaking of that, the writing in Rising is classic Platinum, despite KojiPro having such large amounts of creative control. In terms of narrative it’s no Metal Gear Solid 2, but for what it’s worth, the story is still entertaining enough, with some genuinely hilarious moments sprinkled in among all the brains and nanomachines and Jack-the-Rippering, and the characters are some of the best in the history of the entire franchise. If you liked the writing in God Hand or Bayonetta, you should be entertained here too.

So, for all the hype, the million dollar question is: does the gameplay live up to the rest of the package, and PG’s well-deserved reputation for hack and slash? 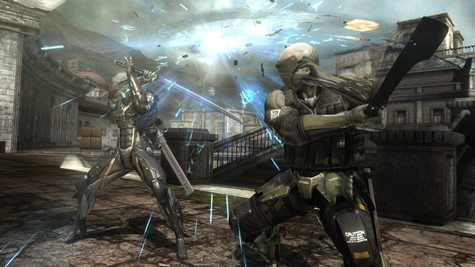 The answer is yes. Yes yes good god yes. I don’t believe I’ve ever played a slasher that feels as good as Rising does. Raiden’s attacks flow so well, and there are few things more satisfying than dissecting hoards of cyborgs once you figure them all out. The parry system can be frustrating at first, but it ended up being my favorite thing about the battle system. Matching late-game enemies blow for blow, trying to perfectly time a counter hit, led to some of the most intense moments in the entire game. Not to mention the game features some of the absolute best boss fights I have ever played. The battles with Bladewolf, Mistral, and Monsoon stand out as the most fun for sure, and the final boss, who won’t be named here because of spoilers, seemed like a massive letdown on paper, but ended up being one of the most ridiculous, challenging things ever.

Those expecting stealth to be as refined as MGS’ usual outings are likely going to be disappointed, as it’s very very bare bones, and for the most part, ridiculously easy. Oftentimes, you can get right next to a stationary guard, whilst wearing a cardboard box with a sombrero on top of it, and he won’t suspect a thing. However, it plays a bigger role than promotional material would lead you to believe, with several “sneak or you’re screwed” segments in the later bits, which is an appreciated touch.

As for the game’s biggest selling point as far as gimmicks go, Blade Mode, it feels pretty good. There’s just something viscerally satisfying about slow-mo cutting a poor mook into a million chunks, and seeing the parts counter on the side go into the triple digits. Manually directing your cuts feels a bit awkward and can occasionally go awry, but luckily this isn’t really required unless you want extra health packs in a couple of boss fights or you’re trying to get some of the unlockables, and you can usually just use the buttons to make quick repeated cuts and get the job done. 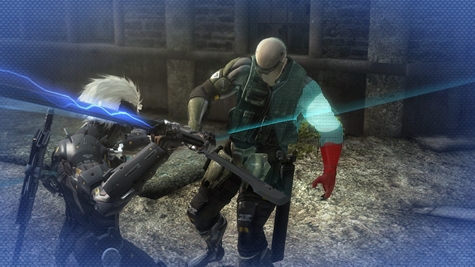 If there’s anything I can really complain about, it’s the game’s length. Despite Platinum’s claims that the main campaign was longer than the rumored five hours on average, I had the game practically beaten within my first night. This was with a six hour shift at work in between sessions. Luckily, the game is made for repeat playthroughs, and with (as of this writing) 50 VR missions available, for free if you’re on the PS3 version, as well as two DLC episodes planned in April and a ton of unlockables to find, you should have no trouble getting your money’s worth from MGR, despite the criminally short campaign.

Another small complaint would be how the game sort of assumes you know how to do everything right off the bat. Tutorials don’t really explain a whole lot, and while this didn’t give me any trouble personally, several people I spoke to about the game were highly frustrated with not being properly told how to use Raiden’s dodge moves, or time parries, which led to several early deaths for them, with a couple almost giving up on the game altogether. I know it’s a Platinum staple to have hidden moves and techniques and such, but with a game that can be this challenging, a little help for the folks who’ve never touched a Platinum title before and are just coming in based on the hype or the Metal Gear name would’ve been nice.

And finally, as touched upon above, there’s a bit of untapped potential. Given the tumultuous development history, I’m honestly happy the game saw the light of day at all, and the improvements seen since the initial announcement trailer back in 2011 are massive (the biggest evidence being the improvement on Jetstream Sam’s design). But at the same time, given the almost two years the game had been in development since Platinum was brought on board, you can’t help but feel they could’ve added more. More levels, more variation in enemies, more length, more skills, just more in general. I don’t believe a five hour game with a rather rushed endgame sequence, including a blink-and-you-miss-it mirror level from a previous chapter, is the absolute best they could’ve done with the time given. 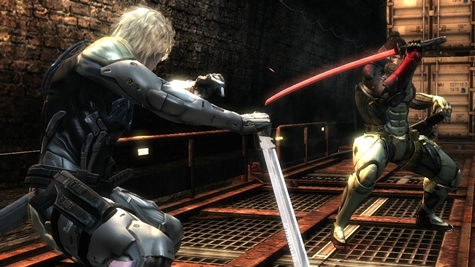 Despite all that, there have been very few games released these past few years that have made me this happy to play. I was almost afraid I’d set myself up for disappointment, given the hype I’d built up for this game prior to release, but I honestly believe Rising is the best Metal Gear game since MGS2 (and this is coming from someone who actually loved MGS4), and I’ll also go out on a limb and call it the best action game released in the past decade at least. The fact that almost a month later, and after many many playthroughs, I’m still itching to play it more should say a lot about the replay value.

I wholeheartedly recommend Rising to anyone who loves a good slash-em-up. It’s going to take something really special to knock it off the top of my early list of Game of the Year contenders, and I really hope the hinted-at sequel comes one day, because I’d love to see Platinum and KojiPro refine this formula to perfection, and fix the few flaws Rising had. 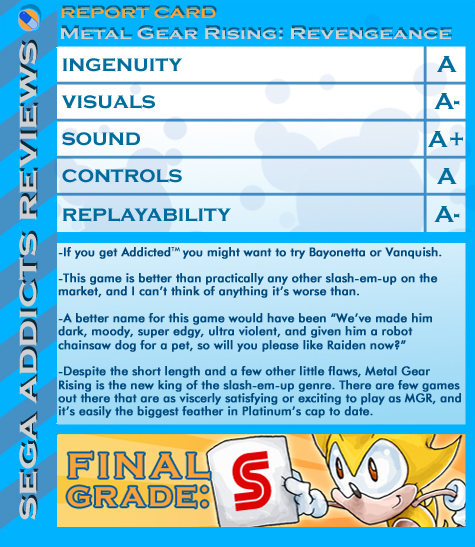