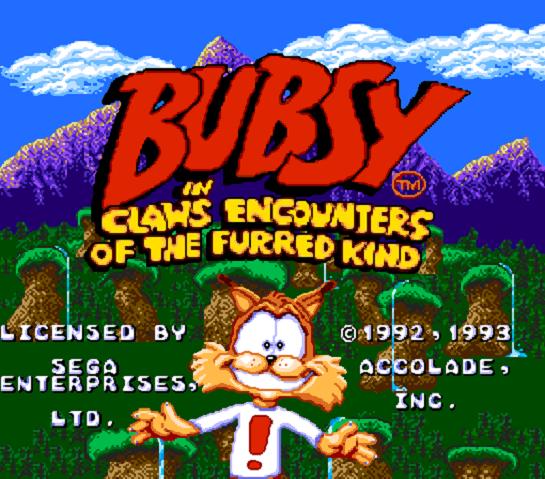 Before I begin, I want to mention that this week’s format will be a little different. Last week’s post was really structured, but this one is going to me more of a flowing rant. I’m experimenting to see which format I like best/which one you like best, so give me some feedback in the comments or in the Not-So Classic Games thread in the forum.

When I was a kid I never played Bubsy. To be honest I’m not really sure whether or not that’s a good thing. The reviews for Bubsy are very mixed, and it seems people either love the game or hate it. This isn’t a review, and it’s safe to assume that I fall under the “hate-it” category. I think this game would appeal to children who don’t know any better, so I can understand where a lot of the positive reviews are coming from. That said, Sonic 2006 appeals to children who don’t know any better so let’s tear this shit apart.

The first thing I noticed when playing this game is that it’s easy to die. In most games that’s not necessarily a bad thing and it adds to the challenge, but in this game it’s obvious that the only reason you’re dying is because of poor level design. Almost every time I started running or jumping I would end up somehow losing control and smacking into an enemy. Or I would fall from too high and die from that. Or I would fall into water. Or some weird metal plate thing would come up and hit me. Or an enemy’s projectile would hit me. Before you start the first level Bubsy asks “What could possibly go wrong?” Fucking everything. And why is there no attack in this game? If you could swipe your claws or curl up in a ball like Sonic (might as well go all out in copying him) you could easily prevent half of the deaths that happen. All you can do is jump on your enemies’ heads or glide into an enemy. Jumping on heads works in Mario because you aren’t going very fast and you can clearly see what’s ahead of you, but this game wants you to go fast and you can never see shit. 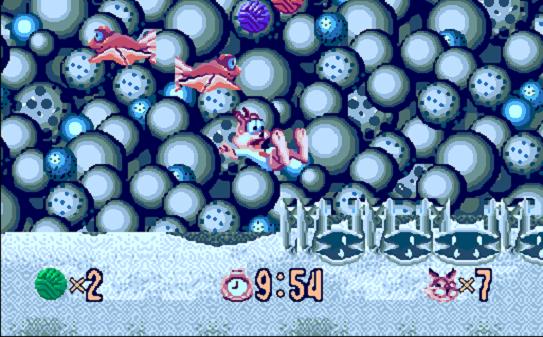 Why are there enemies and spikes underwater? You're already dead!

The game doesn’t control very well either, which doesn’t help the whole constant death thing. If all I can do to kill enemies is jump on them, I had better be able to feel confident in my ability to do so. That’s not the case in this game. I always just try to avoid enemies so I don’t accidentally kill myself trying to defeat them. I don’t even like jumping on platforms because this stupid cat moves so quickly while falling. That sounds weird, but I don’t mean he falls fast, it’s just way too easy to move left or right while falling. This becomes an even bigger problem in the later levels where there’s not solid ground beneath the platforms. Hell, I don’t like running either. I don’t know if there’s supposed to be a wind effect, but it sure feels like it. A lot of times I’ll be moving forward while jumping and see an enemy, so I’ll try to stop moving forward by pressing in the opposite direction on the d-pad, but it fails and I keep moving into the enemy, hit it and die. If there is wind, there certainly is no indication of it, other than being unable to stop, which leads me to believe it’s a programming problem. I actually thought my controller was broken until I played some other games and it worked fine. Basically, when you want to nudge Bubsy he goes flying and when you want him to completely change directions he keeps going. It’s about the most annoying thing in the world.

The game’s story is consistent with the low-quality of the controls. Basically some evil dude and his minions, the woolies, steal yarn from you, so naturally you rain fiery death upon them to get the yarn back and teach them that it’s wrong to steal. The game gives no indication that this is what’s happening, so if you didn’t have a manual or research it, it would be impossible to piece together. How hard is it to work in a screen at the start of the game informing the player of what’s going on? I didn’t even realize the stuff you collect is yarn until I read that. I thought they were cookies. Platformers usually don’t have a strong story aspect, so I can’t ridicule this game for not having one. Sure it’s cliché all to hell, but that doesn’t necessarily make it a bad thing; I wasn’t really expecting much, and it’s cute for the kids. The ubiquitous clichés in the game do make me angrier that you can’t use your claws to attack though. Come on, everything else about cats is in here, why not razor-sharp claws? Maybe the developers hated cats so they made this game so bad to spite them. Come to think of it, shouldn’t cats be able to land on their feet after falling from really high? And why is a cat gliding? The devs didn’t research this very well, or they come from a place with some weird cats. 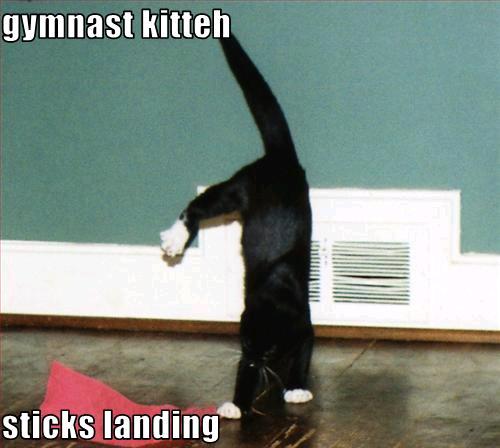 By the way, what’s up with the subtitle: Claws Encounters of the Furred Kind? For one, that shit makes no sense. There is no such thing as a claw encounter, and if there was, nobody uses any claws in this game so there’s no reason to include it. Furthermore, Bubsy is the only character in this game with fur, so are these encounters referring to those had by the woolies at the hands of Bubsy? If they were that would make no sense because Bubsy is the main character, and he’s portrayed as a hero. Obviously it’s a play on words of “close encounters of the third kind” because the woolies are aliens, but it just sounds stupid because it’s just nonsense. Puns are usually pretty stupid, but they should at least make sense.

It’s pretty clear this game was designed for children, but that’s no excuse for how badly it plays. It’s clear that the designers of Bubsy wanted to make a game with a cute character and familiar symbols that children would bug their parents to buy them. Since children don’t know what a video game should be like, they made it very fast and without any concern for how the game plays so they could make a quick buck. That might be a little extreme, but several corners were cut in this game, and it shows very clearly. It’s not the worst game I’ve ever played, at it’s probably not the worst platformer, but it’s by no means a competent one either, and that’s why I hate it so much. If you’re making a game for children, at least have the decency to make it competent.