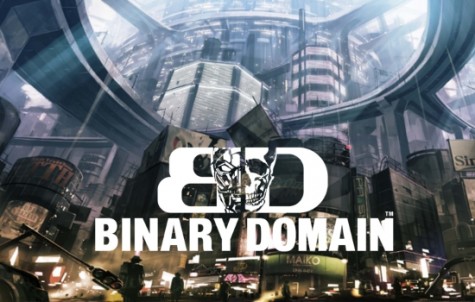 When I first heard about Binary Domain, my skepticism was loud and proud. Team Yakuza still has yet to really grasp the hearty following it deserves in the US, and games like Binary Domain just looked like desperate attempts to appeal to a specific market using sensibilities and assets that just came off as horribly forced and stereotypical. Yakuza is a wonderfully unique series, and for its developers to succumb to cliches just to attract a new audience would be to tarnish the studio’s generally lauded portfolio.

Well, Sega’s latest robots vs. humans game has finally arrived. Has Team Yakuza utilized their substantial developing pedigree to deliver a worthy entry into the admittedly overdone cover-shooting genre? Or is this just a forgettable attempt at snagging a few extra fans with uninspired content and unfulfilled promises? 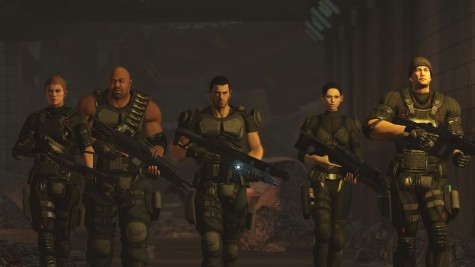 I can’t really blame anyone for being a little bit skeptical about Binary Domain, especially when it comes to the game’s I, Robot-aping premise. The story opens as follows: In the year 2080, robots are being developed and used as dangerous weapons. A new Geneva Code has been established that bans the creation of humanoids that don’t know they are robots. The Japanese Amada Corporation has committed this new-aged sin, and now a multicultural “Rust Crew” of soldiers has been sent in to infiltrate Amada and eliminate the code-violating humanoids.

It’s hard not to scan the back of Binary Domain’s box with the distinct aftertaste of sci-fi classics like Blade Runner, Terminator, and Robocop tainting any freshness that the story seemed to promise. Lifting premises from film is nothing new for videogames, but it’s somewhat disappointing to see this from the elaborate and complex minds of Team Yakuza, one of the more ambitious and adult storytelling developers out there at the moment.

My first introduction to Binary Domain’s characters did little to earn my favor, either. You play as Dan, the pitch-perfect stereotype of the arrogant, loud American soldier. Nicknamed the “Survivor,” Dan heads up a mixing pot of soldiers, each of whom filling the shoes of their respective semi-racist cultural cliches—the beefy black guy who constantly says “Aight,” the snobbish and witty Englishman who never loses his cool, the perky and jovial French robot that can’t resist mingling French colloquialisms with standard English dialogue—all your favorite stereotypes join the party. 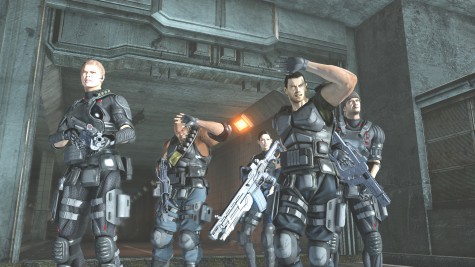 Luckily, these bland openings are slowly wiped from memory as the game progresses. Characters may be aggravatingly predictable in design, but as the story unfolds, the actions they take and the way that certain personalities develop is genuinely engrossing. This is aided by some beautifully written dialogue and often effective character interactions that Team Yakuza is now known for. I often laughed out loud at a lot of the humor, fell deeply into several introspective moments, and felt corny joy with certain character triumphs. And I’m not embarrassed to admit any of this.

Binary Domain’s opening belies the overall quality of the game’s engrossing (if a little unoriginal) plot. While certain characters did feel somewhat shoehorned in to help to diversify gameplay and to add unnecessary padding to the swift first half, the ladder chapters of the game are twisting, interestingly written, and despite a couple predictable moments, very memorable. Fans of Yakuza will be happy to know that Nagoshi’s trademark labyrinthine endings remain intact, but are now attached to a leaner, much faster paced storyline. By the end, the game even musters a few provocative moral questions that, while nothing particularly original, really inspired some authentic turmoil in me that I wasn’t expecting.

Still, even if the story had turned out to be an uninteresting mess of sci-fi cliches, I would have been completely fine with Binary Domain based solely on its consistently polished and finely-tuned gameplay. Like the story, it doesn’t do anything to really jerk the reins of the third-person shooting genre into a whole new direction, but it does a damn fine job of presenting and refining some solid shooting action, intermittently broken up by sequences like jet ski driving, stealthily avoiding bots, and swimming. 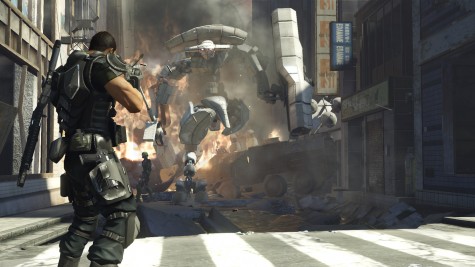 Binary Domain’s greatest achievement could very well be its incredible enemies, namely the intimidating and enormously exciting boss fights. While a lot of the old standards are present (giant, glowing spots to shoot, some cycling of attacks), every one of these hulking foes comes packaged with their own style of gameplay. This includes a chandelier whose electrified tentacles you have to climb, a massive motorcycle-riding bot that you defeat in an on-rails car chase, and a spider-bot whose legs can be blown off one by one. These diverse and challenging bosses delivered the very best moments of the campaign, and easily stand out as some of my favorite boss battles in the past several years. 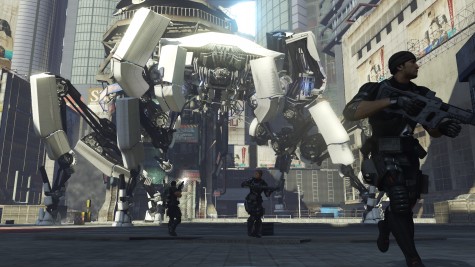 God this boss was awesome.

Even though the campaign’s progression merely upholds most of the third-person shooting standards, Binary Domain is filled with inspired little touches that combine several components of previous examples of the genre to create something that feels at once brand new and noticeably familiar. Team Yakuza once again has employed much of the RPG-lite model, allowing players to modify themselves as well as their teammates with points picked up from demolishing enemies, as well as special nanobot perks that can be purchased at stores to boost health, defense, and more.

Binary Domain’s most impressive melding of RPG and shooter comes with the much-touted trust system. Let me clear up the fog around this vague little addition immediately: it is most certainly not the essential game changer that Sega has been touting it to be. Ultimately, it performs the very same functions, in both positive and negative ways, as morality-based dialogue trees in games like Mass Effect—only it’s done on the fly. In between firefights, you are encouraged to talk to your teammates, gathering their opinions on certain topics. Because Binary Domain stresses a faster, more spontaneous version of this, responses are always brief and very rarely conflicting to the player. I scarcely saw a reason to disagree with the person I was talking to, and found earning people’s trust to be much too easy a task. There are a couple moments where disagreeing with one character gets you the trust of someone else, but it never once felt unpredictable or challenging to earn that trust. 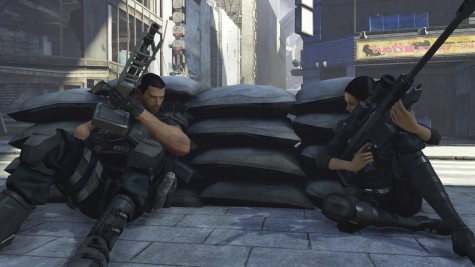 However I will say that I found utilizing this system to be much more satisfying on the battlefield. Ordering teammates effectively and safely in the middle of a vicious gun fight is so much more stressful and strategic than I had imagined. I found myself really worrying about sending my cohorts into harm’s away, especially when their trust was at stake. I would have loved the ability to give orders that are a little more complex than the standard “charge,” “fire,” and “cover me” attacks, as the stress and excitement of issuing mid-battle commands never grew tiresome or boring for me. I suspect that the addition of headset recognition, while a nice little novelty, ended up injuring this part of the game significantly. Dumbing down the commands to simple, one word choices really detracted from my sense of control, and often led to confusing interactions where a couple of my optional responses simply didn’t fit the conversation. Even with its flaws, this attempt at something brand new is still quite refreshing at times, even when it fails. If we ever get a sequel, I hope that Team Yakuza goes a little bit deeper, making its consequences more profound, and its options more diverse. 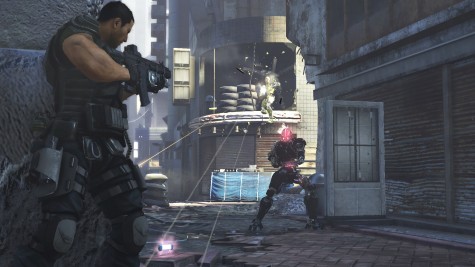 One place where Binary Domain did feel standard and even a bit lazy was in its serviceable, if disappointingly scant, multiplayer. Team Yakuza did a decent job of hitting just most of the essential notes, but there is virtually nothing new or even remotely intriguing about any of it. I had a fair amount of fun blasting away in the Horde-like Invasion Mode, and certain gameplay nuances like the unique health system added an interesting layer of strategy, but the sheer dearth of content (there are very few maps available), the outright lack of decent character customization, and the occasional lag and connection issues further helped to make this already vanilla multiplayer experience feel like little more than an obligatory bone being thrown to purist shooter fans.

Luckily though, stellar multiplayer was the last thing I was looking for in Binary Domain. Team Yakuza is known for telling interesting (and sometimes confusing) adult stories, while trying ambitious (and sometimes silly) new ideas—and Binary Domain succeeds on both of those fronts. I would have loved a further exploration of the game’s trust system, and the visual style does feel a bit too generic for my taste, but the finely tuned and immaculately paced gameplay, coupled with a story that earns its place alongside Team Yakuza’s namesake, makes this a shooter that deserves your attention. It may not be revolutionary or even particularly original, but it is expertly designed and a hell of a lot of fun. 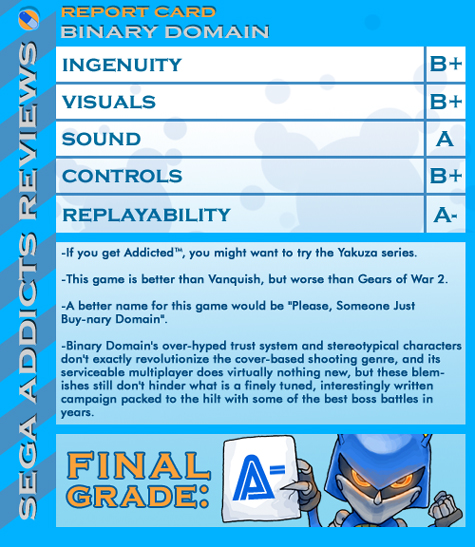 Binary Domain is now 'On Demand'!

Aaron Webber: No news yet on Yakuza 5 or HD Edition localization, but 'spread the word'