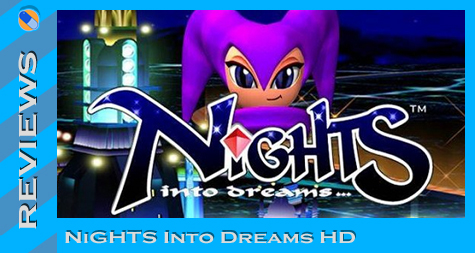 Also available on XBLA and PC

There was a time before cynicism in gaming. There was an age when gamers were constantly excited about the crazy new ideas and gimmicks that game companies would come out with in their constant quest to build the necessary word-of-mouth to sell their software. Sega’s NiGHTS into Dreams is the perfect example of this. Every aspect of NiGHTS was designed to either “wow” the player or to instill a sense of wonder. Such attention to detail is a large part of what led so many gamers to become so attached to the purple jester of dreams.

Sega is banking on that same sentiment existing in today’s crop of gamers. NiGHTS into Dreams HD is a budget priced, content filled, visual and audio celebration of what once made gaming so great. But the question remains: with a fresh coat of paint, can 16-year-old NiGHTS appeal to the gamers of today? 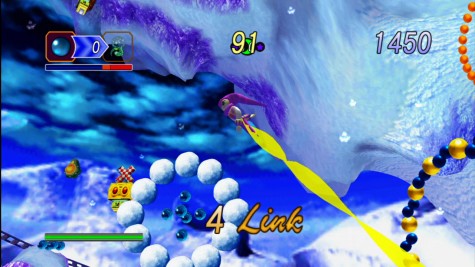 Hopefully I can convey this without sounding like an old man of gaming but I think that the technology inherent in our hobby these days gets in the way of game design. Studios start out with a certain graphical threshold they want to meet and the rest of the game just kind of gets tossed together around it. Mix in some multiplayer, withhold some DLC. Voila: A modern gaming marvel.

On the other hand, NiGHTS is a game built around a concept. It is a game whose development, graphics, music and aesthetics came together around the idea of making the player feel like they were really flying. You control NiGHTS, a rebel Nightmaren who combines forms with two children in order to defeat Wizeman, a living nightmare who has been stealing dream energy from the people of the world. If the story seems confusing, don’t worry about it: NiGHTS is a simple tale where the proper nouns are not very important. What’s important is the message of the game: With a little courage and faith in your friends, you can overcome anything.

In stark contrast with most video game characters, NiGHTS has no guns or weapons. He cannot shoot lightning or punch his way to great justice. NiGHTS can fly around enemies and defeat them by either crashing into them or trapping them in his contrails. Boss fights are as much a battle as they are a puzzle. If you rush head first into the larger Nightmaren that have come to capture NiGHTS, you will more often than not be tossed aside and injured. Timing and ingenuity are the keys to figuring out how to defeat each monster nightmare. 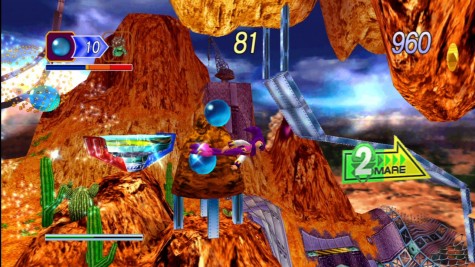 You will guide NiGHTS through seven gorgeous and colorful courses, each representing one of the dreams that the children have. Since this is a dream world, the paths you will fly through are as random as they are fluid. Green forests give way to water parks, museums and snowy fields. Each level has four courses. In each course you will race against the clock to collect enough orbs to destroy a floating cage that is holding an “ideya,” or part of the child’s personality such as their hope or intelligence. The gameplay is a mixture of racing, platforming, and arcade style racking up of points. At the end of each level, NiGHTS will be confronted by a larger Nightmaren sent by Wizeman to end the dream.

The original Saturn release of NiGHTS was a gorgeous, lavish experience with incredibly memorable music and graphics that were above and beyond anything Sega had put out on a home console up until that point. If you have kept up with our reviews of Sega’s other recent HD re-releases such as Sonic Adventure 2 and Jet Set Radio, you are aware that Sega has not been putting in the effort to re-create the “wow” factor that made those games legends in their own time.

NiGHTS HD is the exception. NiGHTS is presented with a graphics engine that looks as far beyond the Japanese-only PS2 re-release as that remake improved upon the Saturn original. If you do not have a widescreen HDTV, you’ll be missing out a bit. The gameplay is fully wide screen, something that Sega has neglected to include in some other remakes. (Fun fact: The original NiGHTS also had widescreen support but few TV’s were 16:9 yet). With clearer graphics and widescreen support, the fast-paced race through the sky feels more natural and fluid. For people who have long since mastered the game, it’s like a new experience, and for newcomers, it will make learning each course much easier and more fun. 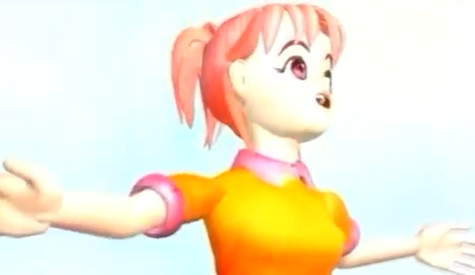 As a fan of nostalgia and all things ’90s, I have to hand it to Sega for retaining the original FMVs. They are cleaned up a bit, but the early era CGI is unmistakable and will probably seem as silly to younger gamers as it seems awesome to the rest of us.

NiGHTS was known as much for its music as it was its graphics. Not much has changed in this department but that’s not a bad thing at all. Odds are that gamers returning to NiGHTS will have much better audio equipment than they did in the ’90s, so make sure to pump the volume up as you play. The soundtrack is as good as you remember, with large and happy melodies that mesh well with the colorful dreamscape you are flying over, as well as a few catchy rock guitar pieces for a couple of the more epic battles. On a side note, the children’s rendition of “Dreams, Dreams” at the end of the game is just as silly/wonderful as it ever was.

NiGHTS has a very simple control scheme. It is almost Sonic-esque in its simplicity. The control stick guides NiGHTS flight path. Up, down, left, right – the game is on rails so there’s not much to worry about. Fly in a tight enough circle and NiGHTS will create a vortex, or a “paraloop.” You can use this to collect items or defeat some enemies. The only other functional button causes NiGHTS to speed up or dash. You can crash into enemies, break through blocks, or just race against the timer. Shoulder buttons will cause NiGHTS to do various acrobatic moves depending on his speed and direction of flight. Mostly, this function is just there to rack up points during certain parts of some levels but veteran players can make NiGHTS literally dance across the clouds as they play through the game. 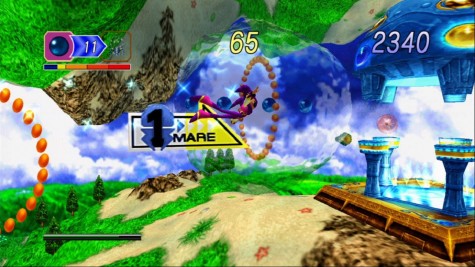 Should NiGHTS run out of time, you’ll have to get used to the games OTHER control scheme. If NiGHTS runs out of time, the child he has combined with will fall from the sky and be forced to WALK to the end of the level. You have a button to jump with but it’s very much a pathetic experience after soaring through a mosaic of dreams. If you get caught by the floating alarm clock, your child will wake and the game will end. As simple as all this gameplay sounds, it’s interesting that back in the day it was actually a very ambitious scheme. The Saturn’s stock controller was not well suited to this game and Sega released a brand new “3D controller” alongside NiGHTS. We really do take analog sticks for granted nowadays.

NiGHTS was already a great game, and with NiGHTS HD, Sega has capitalized on the things that made the game so good. The graphics are better, the music is clear, and the gameplay has transferred over just fine. Here’s the thing: in all the praise I have lavished on NiGHTS, the word “perfect” hasn’t really popped up. There are parts about NiGHTS that were flawed and, sadly, those flaws remain in this version of NiGHTS. Worse yet, Sega may have added a few in as well. 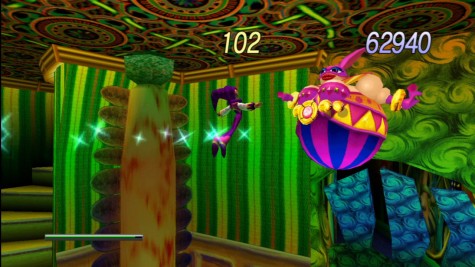 A few of the levels are actually pretty terrible. The forest and desert stages are awkward, annoying, trifling affairs. You will race through, get your “C” rank, and most likely forget about them. Nothing has been done to fix these stages. They are a little bit easier to navigate thanks to the improved graphics but are still no fun to play.

In addition to this missed opportunity, Sega actually took out some content. The 2-player versus mode from the original is gone. “Christmas NiGHTS”, the demo disc with a remixed first level that was given out in gaming magazines back in the day, is included as an unlockable but it is a hollow copy of its former self. Christmas NiGHTS was almost as engrossing as the actual game itself: it was full of unlockables like a playable Sonic the Hedgehog and Reala, as well as Easter Eggs that changed the games presentation based on the Saturn’s internal clock. Most of that seems to be gone or inaccessible. I cannot help but feel that Sega might as well have not put Christmas NiGHTS in if they were just going to remove so much content. 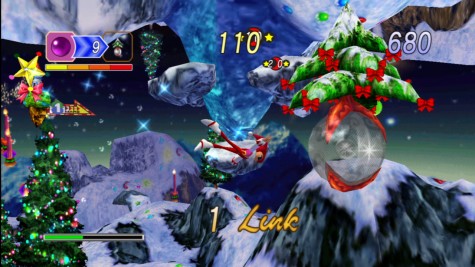 NiGHTS into Dreams HD is a classic game given the makeover it needs to appeal to a new generation of gamers. It’s fast paced and simple–a true game of the ’90s that should still be something the modern gamer will want. Most importantly, it’s another look at what Sega is truly about. It’s not a perfect game and this is not a perfect translation. The upgraded graphics come at the cost of some content and purists WILL notice. All the same, given the $10 asking price and the obvious care put into the development, NiGHTS into Dreams HD is easily one of Sega’s best recent retro revivals. 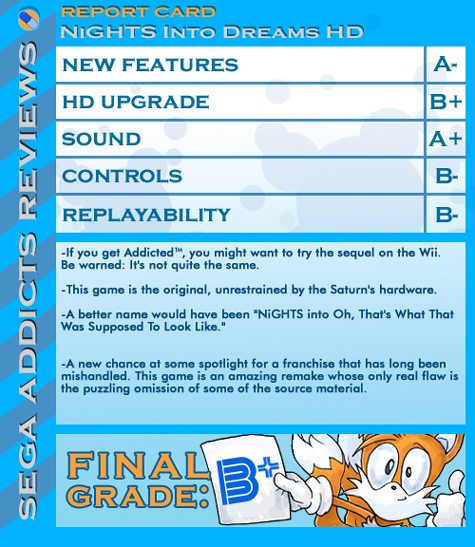